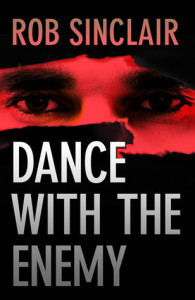 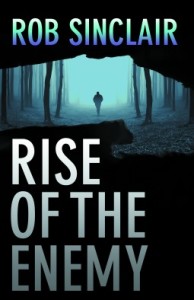 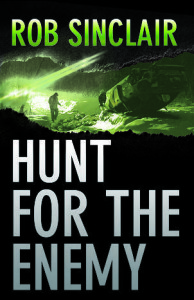 Anyone looking for a thriller series to look forward to in between the necessary Reacher Hope gaps might do well to take a look at Rob Sinclair’s “Enemy” series which features main protagonist Carl Logan – and in fact might even decide that Reacher and Hope will provide reading sustenance during the necessary gaps in these.

I read the first two back to back and am very much looking forward to the third shortly, so now seems the perfect time to talk a little about books one and two and give people a chance to catch up..

Carl Logan was the perfect agent. A loner, with no real friends or family, he was trained to deal with any situation with cold efficiency, devoid of emotion. But Logan isn’t the man he used to be, or the asset he once was. Five months ago his life changed forever when he was captured, tortured and left for dead by Youssef Selim, one of the world’s most violent terrorists. When Selim mysteriously reappears in Paris, linked to the kidnapping of America’s Attorney General, Logan smells his chance for revenge. Pursuing his man relentlessly, oblivious to the growing trail of destruction that he leaves in his wake, Logan delves increasingly deep into the web of lies and deceit surrounding the kidnapping. Finally, he comes to learn just what it means to Dance with the Enemy.

Dance with the Enemy is the perfect introduction to a series for many reasons  – Rob Sinclair builds his characters and their backgrounds in an intriguing and engaging way, but first shoves you straight off a cliff as far as action goes so you are immediately hooked – this appeals to me particularly because I find thrillers that do it the other way round can sometimes drag. Not so here – I was bang in it from page one.

The plot is intricate enough to keep the intelligent side of your brain happy, thrilling enough for the adrenalin moments and twisty enough to keep you on your toes, all wrapped up in a great novel that has a high readability factor. Bang on the money, with a dark side that appealed to me, descriptively speaking it can head into scary territory, some is not for the faint hearted.

There have  been Bond comparisons floating about – personally I think that Logan is as far from being Bond as I am from being a brain surgeon but I get the point with the spy/thriller aspects – however Logan for me was portrayed as far from perfect, flawed to the point that you can genuinely believe in him and therefore much more real. The dynamics between him and other characters within the book are given depth and focus at points of the tale, offsetting the action sequences nicely and giving some quieter moments, so all in all cleverly done to draw you in.

You can purchase Dance with the Enemy here.

Everyone has a breaking point. Carl Logan might just have found his.

For the past 19 years, Agent Carl Logan has devoted his life to his work for the Joint Intelligence Agency; an intelligence agency controlled jointly by the USA and the UK. Policing, espionage and elite armed forces combined in one secretive and powerful network.

When the JIA sends Logan on a routine mission to Russia it should have been simple. But when his cover is blown, he’s transported into a world of hell he thought he would never see again.

Something is different this time, though, and before long doubts begin to surface in Logan’s mind as to why the assignment went so wrong. Logan has never been short of enemies. And sometimes the enemy is closer to home than you think.

Rise of the Enemy (or as I put it YAY more Carl Logan) carries on in the same vein but for me was even better – this one I read in a single sitting, it was intense and very enjoyable (in a hang on to your hats type way).  Rob Sinclair comes into his own here – it is addictive, brilliantly flowing and with Rise of the Enemy the series kicks into high gear both in quality and storytelling, it was well nigh on impossible to put down – the author and the characters both having found their feet.

I like how the mythology is building, there are some beautifully placed surprises in the second book, along with the very best bits of the first as far as action and thrills and spills are concerned. Logan himself is becoming more fascinating with every page read and the specific story in this novel is often breathtaking.

It is always interesting to see the early books of a series you feel could run and run despite the fact that this is supposedly a set of 3 – for me the first two did a great job of hooking me in and ensuring that I’ll read more – perhaps this one more than the first, having now really jumped on the runaway train. The fact that I’ve got another to read soon means that Rob Sinclair will not YET have to have me bugging him about more. Because you know, when I’ve run out of these its possible I’ll have to go into Twitter stalk mode (I’m lovely really).

If Carl Logan is bowing out after the finale to the “Enemy”  novels  I shall be disappointed, but on the other hand, the way these are going so far, with lots of elements that could lead into something else, who knows what might happen. Makes it kind of exciting.

You can purchase Rise of the Enemy here.

The breathtaking and action-packed finale to the bestselling Enemy series. The Hunt is on. They’ve erased his past. Wiped out his very existence. But Carl Logan isn’t finished yet. On the run in a harsh Russian winter, Logan – once an invaluable asset but now branded a traitor – has been framed for murder. His own firm, the secretive Joint Intelligence Agency, have labeled him a rogue operative after two decades of loyal service. The agency is hunting him down… and they’re not the only ones. But there’s much more at stake than just Logan’s life. One by one, agents and informants from all sides, all allegiances, are dying. And Carl Logan is the only man who can put a stop to it, once and for all.

Yes well, I’ve not read this one yet. So like me you’ll have to wait. Sigh. But a review will come very soon. And hey, I’ve given you a heads up….

Find out more about Rob here