Claymore Straker is a fugitive with a price on his head. Wanted by the CIA for acts of terrorism he did not commit, his best friend has just been murdered and Rania, the woman he loves, has disappeared. As his pursuers close in, Clay follows Rania to Istanbul and then Cyprus, where he is drawn into a violent struggle between the Russian mafia, Greek Cypriot extremists, and Turkish developers cashing in on the tourism boom. As the island of love descends into chaos, and the horrific truth is unveiled, Clay must call on every ounce of skill to save Rania and end unimaginable destruction being wrought in the name of profit.

The Abrupt Physics of Dying was a brilliantly banging thriller, one of my favourites of its year, so really then you worry about second book syndrome. Well ok, I worry about second book syndrome. You know. You fall in love with an author then the next book is meh. BUT NO. What WAS I thinking. The Evolution of Fear is beyond banging, its the mental equivalent of running for your life through a dark forest with a bear after you (I don’t run unless there is a bear. Mild amble perhaps but no running)

Paul Hardisty writes intelligent, considered thrillers that actually get the reading adrenalin  going whilst teaching you an awful lot about the world we live in. A keen and knowledgable eye towards environmental issues which comes from real life experiences (If anyone is going to save the planet it would not surprise me in the slightest if it turns out to be this guy) and an absolutely gorgeous prose style that informs as much as it entertains – you absorb the reality whilst being entirely caught up in the fictional adventure, it is really quite a stunning use of language. Seriously. A little in awe here.

If you are following the tour you’ll find a lot of reviewers far more intelligent than I who can speak to the many levels of authenticity in this book, the underlying message, the genuinely current and important issues of our time, so I’m going to TOTALLY ignore all that now because really, Clay. Lets talk about Clay.

I love Clay. HUGE book crush and with The Evolution of Fear the author has added real layers to the character I adored in the first novel. He is intricately drawn, beautifully real, redefined in every moment throughout the course of the story as he fights both external and internal battles. His relationship with Rania, the things that drive him, all of that given sharp focus, an often darkly ironic and humerous eye to detail, I was just fully absorbed into his world from the opening salvo to the closing pages. The character is the story, the story is the hook, there is a perceptive, impassioned core to the entirety of this novel that for me just worked on every single level. Plus it is action packed, set in multiple places all beautifully described and you just won’t want to put it down once you have picked it up.

Oh I could bang on for ages but the bottom line is this.

Paul Hardisty writes bloody brilliant thrillers. Its all you need to know

To Purchase “The Evolution of Fear” clickety click right HERE 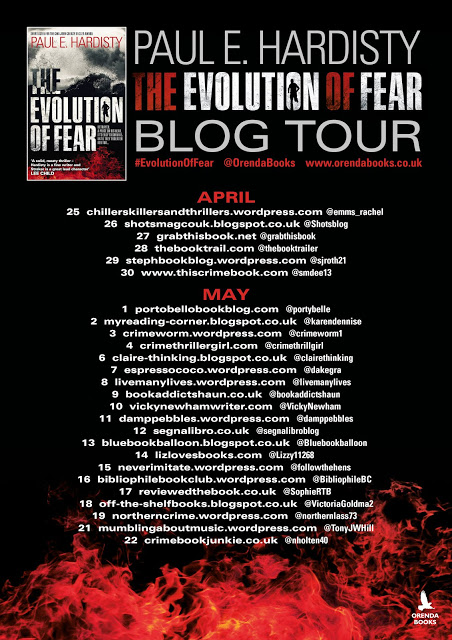