Moscow, 1936, and Stalin’s Great Terror is beginning. In a deconsecrated church, a young woman is found dead, her mutilated body displayed on the altar for all to see. Captain Alexei Korolev, finally beginning to enjoy the benefits of his success with the Criminal Investigation Division of the Moscow Militia, is asked to investigate. But when he discovers that the victim is an American citizen, the NKVD—the most feared organization in Russia—becomes involved. Soon, Korolev’s every step is under close scrutiny and one false move will mean exile to The Zone, where enemies of the Soviet State, both real and imagined, meet their fate in the frozen camps of the far north.

Having recently been introduced to the writing of this author by the lovely Sophie when she sent me a review copy of his new novel coming later this year – The Constant Soldier – which I liked a little bit, maybe (Yes I know I’ll shut up soon about it. Soon as in never) I immediately went and got his previous 3 novels. Because in book love as in real love sometimes you just know.

The Holy Thief is a very different type of story, but turns out that The Constant Soldier was not a fluke so I refer you back to the “sometimes you just know” comment.

Anyway that aside, admittedly I know little to nothing about Stalin’s Russia or that time period in general so the world that William Ryan threw me into here was entirely intriguing, brand new and utterly compelling. Also very very scary, violently intense and the writing here once again is so beautifully immersive that reading it felt like it was right now in the moment. I LOVE books that can do that. Bookish deliciousness of the highest order.

Korolev as a character I just adored, was immediately engaged by and he just had such a layered and often conflicted personality that following along with him was a joy (although often very nail biting with an edge of worry and a touch of oh God) The Holy Thief is very much driven by the main protagonist, through whose eyes you get a real feel for the political landscape, the challenges people living there and then faced, the very real danger they were all in all of the time. Crime fiction with a heavy dose of brutal reality thrown in for good measure, taking you back in time in style – no need for that Delorean, just a pen and a touch of creative genius.

That would be enough but the story unfolding is incredibly addictive (and descriptive, blimey Mr Ryan thanks for THAT particularly vivid nightmare) and has enough twists and turns to keep the most avid crime fan happy. I’m not one for taking plots apart the next reader just needs the sense of it so I’ll say –  the scene setting is perfect, many thought provoking themes running through the narrative and overall just, you know, yes. All the Yes.

I’ll be onto the next book in this series quick smart.

You can Purchase “The Holy Thief” HERE 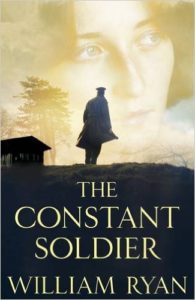