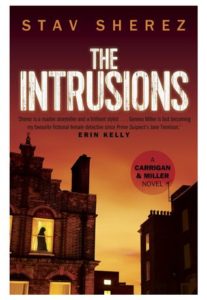 Today I am VERY happy to have the incomparable Stav Sherez answering some little questions for me all about his latest release – The Intrusions. Which I loved. You can read my review if you hit the link I’ve handily provided below but first…

So, lets kick off with a quick retrospective – this is the third outing for Carrigan and Miller a couple I love as literary characters – as an aside I’m glad no Nuns were harmed during the making of this novel – how does it work for you in the series sense – you have to keep finding new ways for them to express themselves. Do you have an arc in mind that covers future books too or is it more organic than that? They are both walking a line in “The Intrusions” for differing reasons.

Thanks, Liz – it’s lovely to know that readers are connecting with the two main characters and I’m so glad now that I held back on killing more nuns!

As to the first part of your question – yes, absolutely. The hardest thing I’ve found in writing a series is keeping it fresh, both for myself and, more importantly, for the readers. The basic structure of a police procedural means that there are a lot of scenes that necessarily have to be repeated in each book (discovery of body, briefing, autopsy, interviews etc.) I wrote the first 70 pages of The Intrusions and it wasn’t working at all; the structure felt too familiar – I was getting bored and I knew the readers would too so I started again and changed things around. I think stylistically too, in terms of sentence structure, each book differs from the others.

In terms of an arc, no, I don’t have one planned. I very rarely plan more than one chapter in advance! I also quickly realised that having a plan would tie me down and, with each book, the story and characters have taken strange paths that I could never have plotted out beforehand. There are certain themes that will appear and re-appear from book to book and certain things I want to do with the characters – but none of this is planned out. If it fits the novel I’m writing at the time, then it goes in, otherwise I shelve it in my head for a later book.

In this instalment you take a look at the impact Social Media has had on crime – both in the sense of victimology and as an investigative tool – what inspired that as a concept and do you think generally that the explosion of social media is a good or a bad thing? I guess the devil is in the details…

Real-life policing and real-life crime inspired the concept. Reading about it every day in the papers. Realising how the internet and social media have subtly altered out consciousness and reshaped our world.

The Intrusions actually started out with me wanting to write a straight serial killer thriller. About eight months in, I realised this wasn’t what I wanted to do at all and that technology, in all its forms, was creeping into every sentence of the book. It normally takes me a year of writing to work out what the book is really about (as opposed to what I think it’s about) – once that happens, everything starts to fall into place. It was also, referring back to your last question, a way to write this book differently from the previous two as the investigative procedure and tools have altered significantly.

The Internet has changed our consciousness in fundamental ways, most of which we won’t even begin to comprehend for at least a generation. It has also changed policing and crime. Murder Investigation teams are no longer reliant on shoe leather and hunches but on geeks burrowed in front of screens mining for miniscule bits of data. A lot of criminality has shifted into the virtual world. War and terrorism have shifted onto the virtual world. Our lives are lived out in two spheres now – the so-called real life and the life we have chatting with each other through the medium of screens. In The Intrusions I was interested in looking at how this new technology has permeated every part of our lives and how an older policeman like Carrigan has to suddenly climb a steep new learning curve.

On whether all this is a good or bad thing, I think, as with most things, it’s both.

There’s a line in the book that says “Like any weapon, its power lay only in the direction in which it was pointed,” and another that says “She stared at the screen, wondering whether for every benefit technology bestowed there was a corresponding evil? Or was it simply that human hearts had the gift of turning everything to their own dark slidings?” – and that’s as good an answer as I can give you. The Internet has been liberating in so many ways and awful in so many other ways.

One thing I love about your writing and plot construction is how the crime elements are really secondary to the human ones – the impact events have on the personality and true centre of all the characters we meet. Not only with the two mainstays of the series, you give just as much attention and depth to those who are in the individual story only, those we are unlikely to meet again. The dark side of human nature if you like, but also the inherent decency of most people. Where do you draw inspiration from to give them all such an authentic touch – and what fascinates you particularly about the vagaries of human nature?

I think what fascinates me most is that we are capable of utter cruelty and supreme kindness at the same time. Cruelty, horror and atrocity obsess me, as I’m sure you’ve guessed by now! I have so many history books called “The Great Book of Horrible Things” or “The 100 Worst Atrocities”, and even the most benign history contains cruelties and horrors far removed from our sense of progress and fairness. It seems so distant from how most of us live our lives. Do we all have this capacity or is it only manifest in some people? These are questions of character, circumstance and morality – themes that I believe the crime novel is so much better tooled to handle than other kinds of fiction.

So by the end of “The Intrusions” there are things that both Carrigan and Miller will have to deal with – a rocky road ahead it feels like – can you speak a little about what is next? Or are you not there yet..

Well, next will be a standalone! I need to force myself to write something different and there are ideas I’ve been toying with for a couple of years that don’t fit the Carrigan and Miller mould. But yes, I have some thoughts about the next Carrigan and Miller and where it finds the two characters. Things will be very different is all I can say!

Finally I’ve been reading some really brilliant books that are out over the course of 2017 – have you yourself read anything recently that you would like to give a shout out and recommendation to?

I’ve been so busy with research reading that I have a pile of books glowering at me from the other side of the room. But of the few I have managed to read, I was very impressed by Henry Sutton’s debut under the name Harry Brett. It’s called Time to Win and is an incredibly atmospheric and gripping crime novel. For a deliciously dark and accomplished debut I recommend Joe Knox’s Sirens. I also loved Paul Auster’s mammoth 4321, his best book for two decades, the kind of old-fashioned novel that seems replete with entire worlds and that you can lose yourself in for days. I’m halfway through Erin Kelly’s He Said/She Said which I am loving. I’m a huge fan of Kelly’s work and this has some of her best writing so far. The book I’m by far most looking forward to is Steve Erickson’s Shadowbähn – Erickson is one of my favourite novelists and his new book about the Twin Towers suddenly reappearing in the middle of the South Dakota badlands with the ghost of Elvis’s dead twin living inside sounds like just my kind of novel!

Sounds just like my kind of novel too! Thanks Stav!

Would you even know?

Detectives Carrigan and Miller are thrust into a terrifying new world of stalking and obsession when a distressed young woman bursts into the station with a story about her friend being abducted and a man who is threatening to come back and ‘claim her next’.

Taking them from deep inside a Bayswater hostel, where backpackers and foreign students share dorms and failing dreams, to the emerging threat of online intimidation, hacking, and control, The Intrusions pursues disturbing contemporary themes and dark psychology.

Read my review of The Intrusions HERE