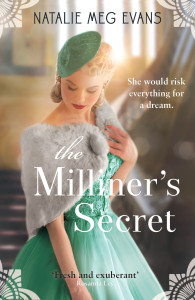 Today I am very happy to bring you an extract from The Milliner’s Secret by Natalie Meg Evans as part of the official blog tour – if you think you might fancy reading this I have one copy of the novel to giveaway (UK Only) – simply comment on this post or tweet me @Lizzy11268 telling me why you would love to read it. One winner will be randomly selected at 5pm today (29th July)

London,1937. A talented young woman travels to Paris with a stranger. The promise of an exciting career as a milliner beckons, but she is about to fall in love with the enemy…

Londoner Cora Masson has reinvented herself as Coralie de Lirac, fabricating an aristocratic background to launch herself as a fashionable milliner. When the Nazis invade, the influence of a high-ranking lover, Dietrich, saves her business. But while Coralie retains her position as designer to a style-hungry elite, Paris is approaching its darkest hour.

Faced with the cruel reality of war and love, Coralie must make a difficult choice—protect herself or find the courage to fight for her friends, her freedom and everything she believes in.

They would have been a spectacular sight in any city at any time. Bare shoulders, impish hats and upswept hair. One, a blonde in her mid-thirties, crossed the dance floor on a zephyr of sex appeal. A younger blonde walked as if she suspected the room was infested with snakes. The third, a redhead, followed like a sleepwalker.

A band pumped out a hot jazz version of ‘La Marseillaise’ – so loud, bottles on the bar shimmered. ‘They know it’s illegal to play that, don’t they?’ The younger blonde, whose name was Coralie de Lirac, glanced uneasily at the stage. ‘Nobody’s dancing.’

‘It’s too damn early,’ said the older one. ‘I can’t get used to being in a nightclub at teatime.’

A month before, hours after they had marched into Paris, the Germans had moved the clocks to Berlin time and imposed a curfew that effectively sealed people into their homes. Then, realising Paris would grind to a halt, they’d relaxed the curfew to midnight. If you stayed later, you were stuck wherever you happened to be until five the next morning. But, then, Coralie reminded herself, the Nazis hadn’t invaded France for the convenience of its inhabitants. ‘Let’s get a table,’ she said. ‘Don’t make eye contact with anything male under ninety. Una? Keep your mind on the job.’

‘Of course. Though we may have to kiss a toad or two before we find what we’re looking for. Oh, don’t take fright, Tilly dear.’ Una McBride threw an arm round their redheaded companion, who had stopped dead at the word ‘toad’. ‘Coralie and I will take care of such niceties. Or “un-pleasantries”, which will be closer to the truth.’ Una’s drawl marked her out as American.

Coralie indicated a table. ‘Over there. Come on, or we’ll be mistaken for the floor show.’ Before they got much further, though, the club’s proprietor spotted them and ushered them to a table of his choosing, closer to the music and the bar. A young man with a boxer’s physique, he wore a white tuxedo and a rose in his buttonhole. ‘Mesdames, enchanted. Welcome to the Rose Noire.’ He kissed their hands in turn, lingering over Coralie’s. ‘Mademoiselle de Lirac, you have been away too long.’

‘I’m flattered you noticed.’ As she sat down in the chair he pulled out for her, Coralie undid and refastened her bracelet, to avoid meeting his smile. When she’d first started coming here in the summer of ’37, Serge Martel had been a glamorous figure, oozing charm, taking care of customers’ every whim. She’d been poleaxed when she’d heard he’d later been arrested for violently assaulting one of his female singers and sent to prison for seven years. Eighteen months he’d served. Nobody knew how he’d got out so early – who had greased the prison doors – but there was something new and unnerving in his manner. Coralie tried to catch Una’s eye, but her friend was busy sizing up the clientele.

Martel, meanwhile, clicked his fingers at an elderly waiter shuffling towards them with a tray of champagne. ‘Quickly, quickly, man. We have thirsty ladies here.’

The waiter called back, ‘If I was younger and faster, Monsieur, I’d be in the army!’ but he hurried forward nonetheless.

Félix Peyron poured vintage Lanson into three glasses, and Coralie noticed how his hands shook. An institution on boulevard de Clichy, he’d aged as though the shock of defeat and invasion had knocked the life out of him. It looked as if he’d taken to rubbing talcum powder into his cuffs to whiten them, but tonight his collar looked distinctly yellow next to Martel’s tuxedo. How did Martel keep his tux so white, she wondered? It was easier to get to Heaven than to find washing soda these days, and laundries gave priority to German linen. Paris had not been bombed, like Warsaw or Rotterdam, but everything was running low: food, fuel . . . hope. For ordinary citizens, anyway. Counting the field-grey uniforms in the club, the caps with their silver eagles laid down on the best tables, Coralie formed her own conclusions about Serge Martel’s recent good fortune.

Having placed the bottle in its ice bucket, Félix stepped back and bowed. ‘You are welcome at the Rose Noire, Mesdames, as beauty is always welcome.’

‘Why, Félix, you wicked seducer.’ Una picked up her glass. ‘We’ll have to keep an eye on you, I can see that.’

Here we go, Coralie thought. If it wore trousers, Una fluttered her eyelashes at it, though tonight her attention was really focused on the stage. Specifically on the Romany violinist, whose sweaty curls obscured half his face and whose shirt hung off one shoulder.

‘Aren’t they just? But I wish they’d stick to jazz standards. Changing the time signature of “La Marseillaise” doesn’t fool anyone.’ Una blew tumbleweed kisses towards the stage, and the violinist broke off long enough to return one. Gentle applause spread around the room. People were looking their way, women in particular. Coralie saw one pull a silk flower from her evening bag and pin it into her hair, as if she felt underdressed in comparison.

Félix, lighting their table candle, chuckled. ‘People see a love affair flowering and it makes them happy, though we are at war.’

‘No, sir, it’s our hats that are stealing the show.’ Una tapped the miniature Gainsborough confection pinned over her ear, ruffling its cascade of flowers and dyed feathers. She said to Coralie, ‘I promised you these bijou babies would be a sensation.’

‘I said they would be. I wish you’d stop pinching my ideas.’

‘Oops.’ Una took an indulgent gulp of champagne. ‘I forget I’m only the muse and not the milliner. By next week, they’ll be the rage. There’ll be a queue from your shop to the river.’

Coralie waited for Félix to leave. ‘Assuming we’re still here next week. Tilly?’ Their friend was staring into her glass as if she suspected prussic acid among the bubbles. ‘Drink it or put it down. People will think you’ve got something to be scared of.’

‘Have I not?’ came the whisper.

‘What choice does she have? We can’t risk taking her home because all our houses will be under surveillance. Her only chance is “over the line into the free zone and keep moving”. And before you talk of putting her on a train to the border, imagine her negotiating timetables, not to mention police checks.’

Una was right. Ottilia had to escape Paris and a car ride was her only hope. They now had to acquire by charm what they couldn’t get by queuing at a police station – her name on a roadtravel permit. An Ausweis, to give it its official, German, title.

Check out the tour! 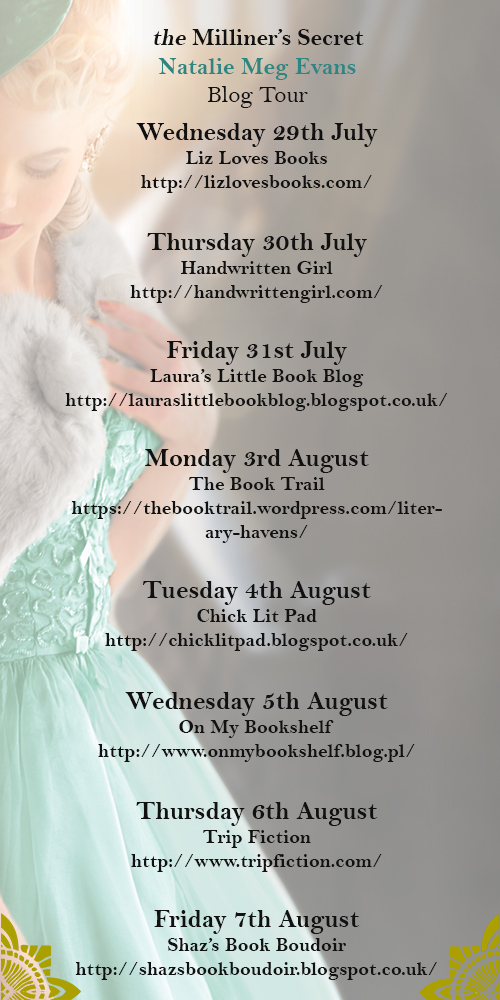