The Plea – Interview with Steve Cavanagh. 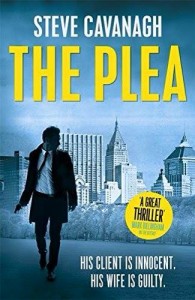 The Plea is out this week and I’m VERY happy to welcome Steve Cavanagh to the blog to tell us a few things. You can see a link to my review and some bookish book info after that. Thanks Steve!

In The Plea Eddie Flynn is once again thrown to the wolves, poor guy – do you enjoy messing with him and forcing him to think on his feet?

Absolutely. Throwing your characters into a meat grinder on page one accomplishes two things. First, the action gets underway immediately; you are thrown into the situation with the character and both of you are scrabbling around wondering if you’re ever going to make it out. Second, it allows me to start the story/plot and develop the characters right away. For me, it’s hard to separate character and plot. You learn more about characters by seeing what they do, how they react, and how they think in extreme situations and it is their reactions which drive the plot. And yes, Eddie can think on his feet. So I try to make it as difficult for him as possible.

The Defence was extremely well received and brilliantly addictive – how easy did book 2 come – were you worried about keeping a level or if anything was this one easier?

This one was both easier and more difficult. It was easier in that I knew the character of Eddie Flynn and he was the one I wanted to write about. So I had a solid base. But I also had to bring something new to Eddie. New case, new challenges, and show a different aspect of his life. So in The Plea, we get to know more about his relationship with Christine, his estranged wife. It was difficult to write because having only written one book previously, I honestly didn’t know if I could do it again. Second books are difficult anyway, but I’m ambitious in what I want to explore. So this book touches on social media, white collar crime and other issues and trying to weave all of that around my take on a locked room mystery was tough. I only hope I pulled it off.

The Plea has a killer opening – definitely one to get the readers turning those pages – how does it work for you in the writing stakes? Do you have one particular scene in mind and it builds from there or are you someone who has the whole story in your head before beginning the actual writing?

I don’t outline. When I begin a book I know the opening scenes, and I have a vague notion of the set-up, and maybe a few ideas about what could potentially happen later on. But that’s it. I don’t have the ending, I don’t have the middle, I haven’t worked anything out yet. I do that as I write. Openings are hugely important to me. I want to grab the reader, not at the end of chapter one, not at the end of page one, but right at the end of the first sentence. If I haven’t hooked the reader by the end of the first line I’m not doing my job. And once I’ve got you I’m not letting go. I write the book, line by line, never seeing much further than the end of the chapter, until I get around three-quarters of the way through. Once I hit that point I stop. I go back and I rewrite the entire book, probably half a dozen times. The beginning, and the ending are so important. You don’t read a book to get to the middle. Even if you are loving a book all the way through – the ending has to give you a big pay-off or you feel cheated. For me, endings have to be two things at once. They have to be both surprising and inevitable. If I get that, I know I’m in pretty good shape.

Which parts are your favourite? The legal shenanigans or the all out action scenes?

My favourite parts are a mix of the court room scenes and the suspense scenes. For example, with The Plea, I set myself a challenge early on. I wanted to write a suspense scene, where the reader is incredibly tense, and we get to know a lot about Eddie, and all of this happens while Eddie is doing something perfectly ordinary. So chapter one begins with Eddie putting a key into a lock. We do it everyday. I wanted that scene to be really tense, compelling and revealing. It took a while to get there, but that’s one of my favourite scenes in the book. The action scenes are a lot of fun to write. They help the pages turn quickly, and they are fun to write. The courtroom scenes take a lot more work, but each cross examination is an entire story in itself, with a beginning, a middle, a twist that nobody saw coming, and a big pay-off at the end. They are labour intensive to write, but well worth it. Also, I like to have Eddie take the reader by the hand in the courtroom scenes, and let them in on the con with him, so the reader learns exactly how Eddie thinks and why he’s asking questions.

As a lawyer, although not a US lawyer, how do you keep it real yet still exciting?

Keeping it real is tricky. If it was totally real it would be boring. But in crime and thriller fiction, nobody writes reality. Most cops spend their days at their desk. Lawyers too. These jobs are interesting and exciting for small periods of time. The key is to set your book in that period of time and hope for the best.

I’m still working on my third book, which should be ready to hand in to my publishers shortly. It’s called The Oath. Eddie is hired by a man called Leonard Howell, whose daughter has been kidnapped and held to ransom. At the same time, an old case of Harry Ford’s is coming back to haunt him and Eddie. Howell wants Eddie to help him deal with the FBI and the ransom drop. But that’s where things start to go wrong, in a BIG way.

Thanks so much Liz.

Fraud. Blackmail. Murder. It’s all in a day’s work for Eddie Flynn.

For years, major New York law firm Harland & Sinton has operated a massive global fraud. The FBI are on to them, but they need witnesses to secure their case. When a major client of the firm, David Child, is arrested for murder, the FBI ask con-artist-turned-lawyer Eddie Flynn to secure Child as his client and force him to testify against the firm.

Eddie’s not a man to be forced into representing a guilty client, but the FBI have incriminating files on Eddie’s wife, Christine, and if Eddie won’t play ball, she’ll pay the price.

When Eddie meets David Child he knows Child is innocent, despite the overwhelming evidence against him. With the FBI putting pressure on him to secure the plea, Eddie must find a way to prove Child’s innocence while keeping his wife out of danger – not just from the FBI, but from the firm itself.

You can order The Plea by clickety clicking HERE 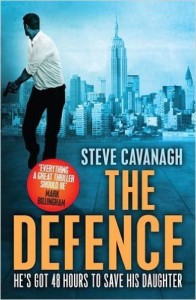 The truth has no place in a courtroom. The truth doesn’t matter in a trial.

The only thing that matters is what the prosecution can prove.

Eddie Flynn used to be a con artist. Then he became a lawyer. Turned out the two weren’t that different.

It’s been over a year since Eddie vowed never to set foot in a courtroom again. But now he doesn’t have a choice. Olek Volchek, the infamous head of the Russian mafia in New York, has strapped a bomb to Eddie’s back and kidnapped his ten-year-old daughter Amy.

Eddie only has 48 hours to defend Volchek in an impossible murder trial – and win – if wants to save his daughter.

Under the scrutiny of the media and the FBI, Eddie must use his razor-sharp wit and every con-artist trick in the book to defend his ‘client’ and ensure Amy’s safety. With the timer on his back ticking away, can Eddie convince the jury of the impossible?

Lose this case and he loses everything.

My Original Review for The Defence is right HERE

You can Purchase The Defence by clickety clicking HERE

One Response to The Plea – Interview with Steve Cavanagh.