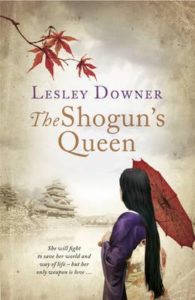 Today I am very happy to kick off the blog tour for Lesley Downer’s “The Shogun’s Queen” by offering you an extract to wet the appetite. Enjoy! The Shogun’s Queen is published on the 3rd November from Bantam Press.

Third day of the twelfth month, Year of the Dog, Kaei 3

Lanterns flicker outside the wooden walls of the palanquin. Feet stamp, metal clangs on stone. The palanquin hits the ground with a bump. Inside it is pitch dark apart from the thread of light that rims the door. The traveller looks down at her small white hands, twisting them apprehensively. She left home at cockcrow and the sun has long since set. She has been sitting in this cramped wooden box all day with her legs curled under her, pitching back and forth on the shoulders of the bearers. She’s chilled to the bone and exhausted but she’d far rather stay huddled for ever in her miserable conveyance with its nauseating odour of lacquer than step out and face these hostile men.

The gruff shouts drum into her head. She smells smoke and tallow, hears the crackle of torch flames. She braces herself, pats her hair into place and smoothes her kimono skirts, badly creased by now. She’s never been away from home before. She wonders what will happen when the door slides back, what these sentries – she assumes they’re sentries – will do when they discover who she is and why she is here.

She takes a breath, tries to still the beating of her heart. ‘My name is Okatsu, daughter of Tadataké Shimazu, Lord of Ibusuki,’ she says, as clearly and loudly as she can. Her voice sounds high-pitched and tremulous in the night air. The last thing she wants is for these men to discover that she is only fourteen years old or –worse – that she is afraid. ‘I have a letter for His Lordship,’ she adds in as firm a tone as she can manage.

The sentries suck their breath through their teeth and confer in mutters. ‘If you’d be so good as to hand it out, Your Ladyship, we will ensure it reaches him,’ says a wheedling voice in deferential tones.

‘Apologies, Your Ladyship. We have orders to check the identity of all visitors before they enter the precincts.’

The door to the palanquin rattles. Before she can utter another word it slides back. Faces peer out of the shadows, as hideous as demon masks in the lantern light. She blinks, dazzled by the sudden glare.

The sentries’ eyes widen. There’s a long silence, an intake of breath. ‘Well, what do you know!’ says one, shaking his head. ‘A child!’

‘And what a beauty!’ says another.

The lanterns and faces close in. A cold wind swirls. She shrinks back. On her knees, swaddled in futons, she feels small and vulnerable. She is a lord’s daughter, she reminds herself. She draws herself up. ‘I require to be admitted into His Lordship’s presence,’ she snaps with as much dignity as she can muster. The men grunt and back away and the door slides shut. Once again she’s cast into darkness. Footsteps retreat across the court-yard, staves clang on cobblestones. She bites her lip. Will they arrest her, lock her up, take her hostage? Her father and His Lordship are bitter enemies. The sentries may suspect she is a decoy, that she plans to assassinate His Lordship, that the letter is poisoned.

She curls her fingers around the hilt of her dagger. Like all women of the samurai class, she carries it tucked into her sash at all times and she knows how to use it, to fight if necessary or, if she is captured, to kill herself.

Winding her way along the coast, dozing in her palanquin, she’s been trying not to think about the events that have brought her on this freezing winter’s night from her peaceful home in the seaside town of Ibusuki to the towering gates of Crane Castle in the city of Kagoshima. Now images flash through her mind – the gatherings, the raised voices, the doors slamming late into the night. She screws her eyes shut as she remembers that fateful day when soldiers arrived to arrest her father, shouting as they slammed their staffs against the door. He was lucky, he’d been put under house arrest. But several of her friends’ fathers had been sent into exile and two were executed. She blinks back tears as she thinks of it.

And there was worse to come. Her father‘s closest friend, a much loved uncle, had been ordered to commit ritual suicide and her father had been commanded to witness it. She pictures her father’s face when he came home that night, his shoulders slumped. He’d brought back her uncle’s white linen underrobe, black with blood. He gathered the whole family together and held up the robe so that everyone could see it. She hears his voice, hoarse and ragged, ringing in her ears.

Take a long, hard look,’ he’d croaked. ‘This is the price of justice and loyalty. ’

‘Justice and loyalty . ..’ No one tells women anything and especially not fourteen-year-old girls, but she’s worked out that there is a power struggle between His Lordship, the veteran Prince of Satsuma, and her father’s cousin, Lord Nariakira, His Lordship’s son. Lord Nariakira is Okatsu’s favourite uncle and her father his most loyal ally. There is no doubt which side of the struggle she and her family are on.

She shuffles and grimaces as blood comes flooding back into her legs, numb from kneeling for so long. A couple of months have passed since that terrible night. The maple leaves had fallen and there was a dusting of snow on the ground. Then – just yesterday – her mother had come in search of her. Okatsu had been in her room, bent over her books. Her mother took her aside, her elegant face pale and drawn. She had a task for her, she’d said hesitantly. She was to go to Crane Castle, the seat of His Lordship the Prince of Satsuma, to deliver a letter.

Okatsu was startled that her own mother would send her into a hornets’ nest, into the enemy camp. But when she tried to ask, her mother raised a finger. ‘Not a word,’ she said.

Okatsu understood. The less she was told the less she’d be able to give away if she were captured and tortured. She drew herself up, proud that she’d been entrusted with such a vital mission.

‘I have faith in you, Okatsu- chan ,’ her mother had said, handing her a scroll box. ‘I know you will do your best.’

Okatsu had been taken aback to see tears in her proud mother’s eyes. As she’d stepped into her palanquin at dawn that morning the whole household had lined up to see her off. Even her father and brothers were there to wish her a safe journey, as if they weren’t sure they would see her again.

There are footsteps outside the palanquin. The sentries. The young lady may enter but she is to leave behind the attendants and guards who have come with her from Ibusuki. The bearers take her in her palanquin up to the great entrance hall of the castle. There she gingerly unfolds her legs, first one, then the other, and steps out into the dark hallway.

A bevy of stern-faced women sweeps out of the shadows, exuding musty perfume. They grip her elbows and usher her through long corridors and into a side chamber. Muttering, they remove her heavy kimonos one by one until she is naked and shivering. She grits her teeth, trying not to recoil as they poke bony fingers into every crack and cranny of her fourteen-year-old body. She is of samurai stock, she reminds herself. She must not disgrace her family by showing the slightest humiliation or fear. The women take away her dagger and remove her hairpins and her hair falls in a glossy black curtain around her bare body. They check that she has no other sharp objects then tell her brusquely to dress herself and give her a ribbon to tie back her hair.

Only one woman can save her world from barbarian invasion but to do so will mean sacrificing everything she holds dear – love, loyalty and maybe life itself . . .
Japan, and the year is 1853. Growing up among the samurai of the Satsuma Clan, in Japan’s deep south, the fiery, beautiful and headstrong Okatsu has – like all the clan’s women – been encouraged to be bold, taught to wield the halberd, and to ride a horse.
But when she is just seventeen, four black ships appear. Bristling with cannon and manned by strangers who to the Japanese eyes are barbarians, their appearance threatens Japan’s very existence. And turns Okatsu’s world upside down. 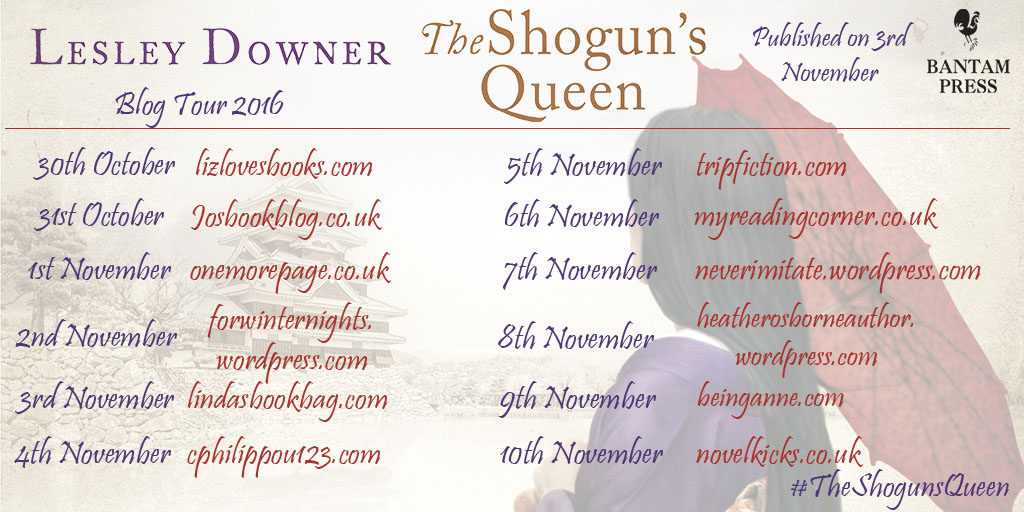 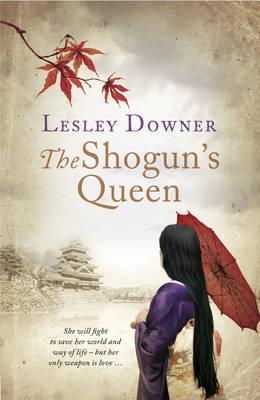