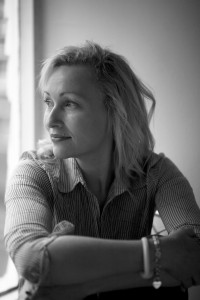 So in at Number 7 on my Top Ten reads of the year was Murder, the follow up to Mayhem, from lovely lady Sarah Pinborough. She was nice enough to answer a couple of questions for me – here is what she had to say.

Could you tell us a little bit about where the inspiration for Mayhem and Murder came from?

When I was coming to the end of The Dog-Faced Gods trilogy and starting to think about what I’d like to do next, I finally got round to reading The Terror by Dan Simmons. I really loved it, and particularly liked how there was a blend of fact and fiction woven together. I wanted to do something like that but with a crime instead. I started researching unsolved Victorian murders and I found the Thames Torso Murders and that was it. I was hooked.

Was it enjoyable or a little daunting giving an imaginary voice to some real characters from History?

Both! I was more worried about getting the facts right actually. I’ve tried to keep to the real people’s lives timelines and also kept the details of the investigation and murders exactly as they were. It was really interesting to have a factual skeleton to add the flesh of fiction to. But it is a strange thing to think that so many of my characters were real people. I’ve almost forgotten that having spent so much time with them. I hope they wouldn’t have minded!

Whilst this story is not specific to that, but set around that period, why do you think people still find the Jack the Ripper story so fascinating?

He was flamboyant and he arrived at a time when newspapers could suddenly print every gruesome detail and spread the fear in the way the tabloids do now. The impulsiveness of his crimes and the dramatic nature of them and of course the fact that he was never caught has meant that the cases have never been laid to rest. In a lot of ways, He’s almost become like a fictional villain.

I have three books to give to people this year.. the first is Lists of Note, the second is Great Lost Albums, and the third is Alan Stoob: Nazi Hunter.

So after Mayhem there was Murder and as Ms Pinborough wove her unique brand of literary magic around me again I was immediately transported back to Victorian London and the weird and wonderful world of Dr Thomas Bond.

Here we find him recovering from the events of “Mayhem” and finally finding some form of equilibrium again – his life back on track, love in his future and much to be grateful for. But the darkness has not been completely banished and life is about to take an unexpected turn.

In “Mayhem” life and soul was given to some real life characters from History, here that mythology deepens and expands in the most delightful way. I was engrossed, addicted, often sitting WAY too close to the edge of my seat and the sheer genius of the tale was absolutely compelling. And frankly, often scaring the bejesus out of me. Which is not easy to achieve.

The writing is sublime. The storytelling is intelligent and engaging. The descriptive prose and creeping sense of menace is beyond any words I have to describe it –  add to that probably the best scene setting I’ve seen for a while with the ability to put you right on the streets of London as it was and you have a heady mix of reading mayhem. Yep that was intentional.

Sarah Pinborough is absolutely one of my favourite authors. Definitely the best lady on the block. And coming close to kicking the ass of Stephen King who has had my No 1 spot forever. What else is there to say? 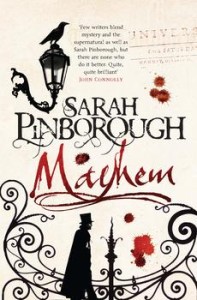 Just look at those covers! How can you resist?