Val McDermid is the author of the Tony Hill/Carol Jordan series of novels, one of my favourite sets of books and also of several standalone psychological thrillers  and the Karen Pirie series all of which are extremely compelling. 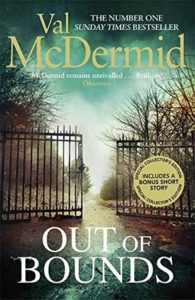 When a teenage joyrider crashes a stolen car and ends up in a coma, a routine DNA test reveals a connection to an unsolved murder from twenty-two years before. Finding the answer to the cold case should be straightforward. But it’s as twisted as the DNA helix itself.

Meanwhile, Karen finds herself irresistibly drawn to another mystery that she has no business investigating, a mystery that has its roots in a terrorist bombing two decades ago. And again, she finds that nothing is as it seems.

Reviewing Val McDermid is becoming a tough job, at some point you run out of superlatives, you repeat yourself and can’t really think of any other way of saying that the novels are top notch brilliantly written gems of crime fiction and if you are a crime fiction fan you should just read them all. Fairly sure I’ve just repeated myself again from any number of the last few times I’ve reviewed.

ANYWAY whilst I never thought that Karen Pirie would engage me as heavily as Tony Hill always has, in Out of Bounds that connection became complete. I loved this one, it was particularly addictive even for a novel from this author and I pretty much read this in one sitting. With her usual insightful and witty eye towards characters and setting, a twisty tale that is still completely believable and a bang on the money fascinating plot Out of Bounds gets a huge tick from me. On every level.

Karen as a character, well, you can’t help but dig in deep right alongside her – her way of dealing with personal tragedy, her way of rampaging through the white noise towards the truth of the matter and her ever growing relationships with those around her just give a hugely gripping anchor to the wider narrative, where in the mystery elements Val McDermid gives your brain a work out.

Overall Out of Bounds is one of my favourites to date, simply because of the storytelling. And storytelling is of course where the heart lives for us readers. So carry on please Ms McDermid – more Karen, more Tony, frankly more of whatever you’d like to throw at us. I’ve yet to be even vaguely disappointed.

You can purchase Out of Bounds HERE 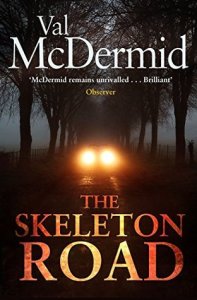 When a skeleton is discovered hidden at the top of a crumbling, gothic building in Edinburgh, Detective Chief Inspector Karen Pirie is faced with the unenviable task of identifying the bones. As Karen’s investigation gathers momentum, she is drawn deeper into a world of intrigue and betrayal, spanning the dark days of the Balkan Wars.

So the other series  this time, (not Tony Hill) an excellent and very involving read showing once again that Val McDermid is pretty much in a class of her own when it comes to Crime Fiction.

Here we find Karen Pirie (A Darker Domain) , on the cold case squad and tasked with discovering the identity of some remains discovered on the roof of a long abandoned building – as the case progresses she becomes embroiled in a vendetta with its roots in the Balkan Conflict.

Extremely gripping throughout, with a multi stranded story  and some very haunting and evocative details about the atrocities in the Balkans, this was really part murder mystery and part history lesson, whilst still being highly entertaining. Some great characters (lets hope Karen returns one day) and a truly compelling tale of violence and judgement that was at times truly chilling, I found myself more interested in the past than the present, our victim being rather enigmatic I was really keen to find out the truth.

The mystery element is extremely well constructed as always, even though the murderer was fairly obvious I think that this added to the tale rather than took away from it – because the heart of the story was not “whodunnit” but a real opportunity to explore themes of loss and revenge. Ms McDermid as always does not pull any punches in her descriptive prose and this brings to horrific life the details of war and the atrocities that can occur, often unnoticed. I particularly liked how the focus was not on the “Headline” making events but rather on the smaller, violent occurrences that were going on daily and not always talked about.

Overall another brilliant read, some of the best crime fiction out there.

First of all, thank you to the author and publishers for the advance copy of this novel via netgalley. I was overjoyed to receive it as I’m a long time fan of Tony Hill and indeed all books from Ms McDermid. My beautiful Hardback copy remains on pre- order. Hey, Bookshelf OCD. Can’t have a missing one from the collection…

So, the latest instalment finds Tony and Carol at odds in the aftermath of “The Retribution”..meanwhile Paula Mcintyre takes front and centre as she takes on the case of a missing friend…and also begins the hunt for a killer alongside her new Boss, someone she is not sure of. Paula can’t  resist getting Tony involved, this must mean that Carol will not be far behind….surely?

I’m used to a high standard from these novels – I will admit to some slight concern about what would come next, The Retribution having had such an emotive storyline for those of us who are fans of the Carol/Tony pairing…and leaving us with such huge consequences for their relationship. How could she top that I wondered? I kept the faith though and my faith was more than justified. Here we have not only a top notch mystery as usual but a wonderfully written continuation of our favourite characters ongoing story.

By cleverly giving more focus to Paula, a character I have always been inordinately fond of anyway, and for at least the first portion of the book putting Tony and Carol very much in the background of the story as it relates to the current investigation, Ms McDermid created for this reader, a thing of beauty. I was equally enthralled with the new case and with Paula’s struggles to come to terms with new relationships..both personal and professional. And then flipping the coin and seeing just how Carol is coping with her life and how Tony is trying to cope in his world that simply, at this moment, does not have Carol in it.

Other characters, both old and new make an appearance, a little twist to Paula’s case gives us some unease and I had to make myself slow down a little and appreciate the writing  – I could happily have read this one in a few hours straight when as usual it is a thing to be savoured….

Pulling together the strands of the story, Ms McDermid polishes things off in her indubitable style and gives us, her constant readers, a satisfactory conclusion and yet…a very real need to find out whats next for Tony, Carol et al. Oh dear, here comes my chronic impatience again…

So for the readers. If you are already immersed in this world then this instalment will more than satisfy you..I have no doubt. If you have yet to meet Tony Hill and Carol Jordan then don’t start here – you COULD, in fact you could start anywhere, but I would highly recommend that you start at the very beginning. Tony and Carol have had a whole life before this. “The Mermaids Singing” begins their story…where it will end we have yet to discover. 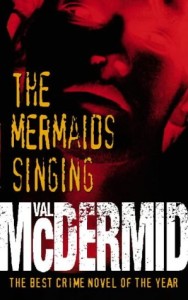 So with great anticipation I set off on my re-read of all Val McDermids novels and I began with “The Mermaids Singing” the first in the series featuring Tony Hill and Carol Jordan.

In Bradfield the bodies of four men have been discovered…with the police reluctant to link them Dr Tony Hill is already certain that a serial killer is operating in the area. When forward thinking ACC John Bradfield enlists Tony’s help to profile the killer, he is teamed up with Carol Jordan and so begins their story…

Not for the faint hearted, Ms McDermid weaves a gruesome tale….the killer being obsessed with medieval torture instruments means that none of the victims died easily..and there are no punches pulled. The mystery element, as will become a trend in the series, is pyschologically complicated and compelling…and it makes for an involving read.

The seeds of the ongoing relationship between Tony and Carol is astutely done..once you have finished this you will want to know whats next. They are both well drawn characters with hidden depths – in this, the early stages of knowing them, Ms McDermid gives us an intriguing and captivating peek into their lives. And I can promise you it gets better.

All in all a high standard of Crime Fiction with protagonists you will want to follow and a formidable villain to boot – if you are a fan of this genre they don’t come much better than this. And if you only dip your toe in Crime you might want to take a paddle….

For me, a Val Mcdermid novel is a treat to be savoured which is why I often read them long after publication (the exception being the “Tony Hill” books which I can’t stop myself from devouring in an instant!). The Hardback version of this has been sat on my shelf for a while (and boy its a good looking book) A couple of days ago I decided it was time and dived in. I tend to really enjoy Ms McDermid’s stand alone novels (A Place of Execution and The Distant Echo being some of the best crime fiction I’ve ever read) and it was no different here. Charlie Flint, currently suspended psychiatric profiler, receives a package in the post with clippings about a murder that has taken place at her old College in Oxford. Her investigation into who sent this to her, and ultimately into the murder itself, creates the basis for this story. Well executed as ever, Val Mcdermid is the queen of misdirection whilst always in actuality sending you completely the right way if only you can get your brain in gear. Her characters are real and so are the places they inhabit. This book was even more fun for me as I live just outside Oxford, and atmospherically she has got it spot on. As usual you get all the information you need to know what the truth actually is long before the end and yet still the rug gets pulled out from underneath you. Whilst this was not my favourite of her novels, that doesnt detract from the fact that this is Crime fiction at its best.

One Response to Val McDermid