Today we have the release of TWO great books – The Venus Trap by Louise Voss and Black Wood by Susi Holliday – both available now in Ebook. I’ve read both, both are fabulous and I’ll be reviewing them properly before too long. But both novels feature a character named Jo. Are they similar? Well Louise and Susi got together to discuss this and here is what happened…. 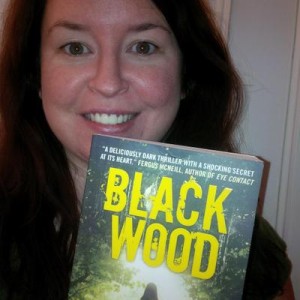 Susi: Hi Louise, nice to see you *chinks wine glass* Let’s talk about how we’ve both got books out today and how they are completely different, but in some ways very similar! We’ve both got a main character called Jo. Mine is darkly funny and a bit unstable. She’s so full of secrets, she can barely function and I’m not sure how anyone puts up with her, to be honest. She’s early 30s but seems younger, because she hasn’t really managed to grow up very well, although a lot of what she faces isn’t entirely her own fault. She’s also unlucky in love, but not quite to the extent that yours is…. How would you describe your Jo? 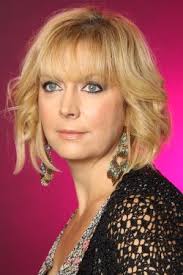 Louise: Hi Susi! Cheers! I love that we both have dysfunctional Jo’s. Mine isn’t too dissimilar to yours, characterwise. Although they come across very differently on the page, don’t they? Mine is older, in her early 40s, so age has helped rubs the edges off her teenage insecurities and instabilities – not completely, but somewhat. She’s one of these women who has no real confidence in her appearance or abilities, due to those deep-seated insecurities. I feel so sorry for her – she was already almost at rock bottom before a mentally-unstable suitor decides he can’t let her finish with him…

Susi: I’m sure we’ve all had some exposure to mentally-unstable suitors at one point in our lives! Black Wood came about from the vague memory of a disturbing childhood event. Also, I set the book in a fictional version of my hometown, and merged lots of people’s traits to create my characters. How much real life experience do you disguise and put into your book(s)?

Louise: The Venus Trap is also set in a fictionalized version of my hometown. I’d say Jo’s character is one of the more autobiographical that I’ve written, but that the events that shape her and the problems she has are things that for the most part I’ve not personally experienced – oh, apart from Jo losing her dad as a teenager, having her heart broken, and getting divorced. Those bits have an autobiographical slant… so perhaps she’s more like me than I realized when I started writing it!

I think the character of Claudio is the only one I’ve written who absolutely doesn’t bear any resemblance to anybody I’ve ever known. Everything about him is fictional bar one tiny detail: the way his trousers bunch up around his buttocks because of the uptight way he stands – I did notice someone standing like that at a wedding I went to last year. I can’t remember where I got his name, Claudio Cavelli, from (although I was a bit freaked out recently when a woman handed me her business card and her name was Claudia Covelli…! She was very nice though).

Susi: Wow – the autobiographical bits you mention are quite significant… I’m sure there’s a lot of me in Black Wood too, but nothing too specific, more a general feel of how I experienced life where I grew up, until I left in my mid-20s. I did make it to brown belt in karate though, so I was able to write the scene at the self-defence class without much effort. The rabbit skinning part involved research though, via a revolting youtube video that I had to watch-pause-watch about twenty times. Yuck!

We share a theme, in that a childhood experience can have far reaching consequences. Mine involves intentional acts of violence, which I don’t think I can even mention without revealing spoilers! Can you tell us about yours?

Louise: The things we have to do for research – I’m going to have the rabbit-skinning video image in my head all day now… You’re right about the shared theme – and mine also involves an act of violence. Nothing new under the sun, is there? (Although I’m only saying that, knowing how entirely different our two novels ended up being!) The act of violence in mine is when 16-year-old Jo gets jumped on by a stranger in an alleyway, which causes a long-lasting issue for her with trusting her instincts. The other childhood experience she has is, as I said before, bereavement. When that happens to you as a teenager I think it takes decades to recover from– if you ever do.

Susi: I can’t imagine how you could move on from that. You’re very strong. Did you keep diaries as a teen? I did for a few years. I used to write about boys in great detail. It was appalling. I ceremoniously burned them all when I was 18. I don’t know if I was more scared about others reading them, or me reading them myself later on…

Louise: I did. From 11 to about 18 it was a tiny (A5 size) lockable five year diary that only had about six lines of space for each entry. I managed to make it last seven years because I used to not bother with it for months, then write loads, in tiny handwriting – sometimes the entry for one day goes across three years’ worth of spaces on the page for a particular date. It’s really interesting* to look at now because within the same pages are entries moaning about school dinners and homework when I was 11, up to serious boyfriend issues and losing my dad when I was 18 – a sort of condensed overview of my teenage years. After I went to uni my diaries got a lot more lengthy and pretentious…

*when I say‘really interesting’, obviously I mean, really interesting in the way that old diaries are to their author and absolutely nobody else…for about five minutes until the author gets so bored she feels like sticking pins in her eyes…

Here’s a question for you, Susi – who do you most admire on the crime-writing scene at the moment? There are so many good writers around, aren’t there? I currently can’t get enough of Paula Daly and Tammy Cohen, and I think Erin Kelly’s prose is to die for.

Susi: I agree with all of those! I absolutely love Paula Daly – her writing is so effortless, it’s as if a friend is telling you an extended anecdote. I loved Tammy Cohen’s latest, which funnily enough, also involved a love-gone-wrong hostage situation; a bit like yours – except as we’ve said earlier about the comparisons between our books, Dying for Christmas was nothing like yours at all. I love that you can have the same basic idea and run with it in so many different ways. Who do I love at the moment? I think Mel Sherratt is just brilliant, and both Jane Isaac and Rebecca Bradley are ranking high in my ‘ones-to-watch’. I could name a hundred… there is so much talent out there. Notice we both picked three women though? It wasn’t intentional!

Louise: Yes, I’m really enjoying Mel’s new one at the moment, and was very impressed with Rebecca’s debut. Jane is on my TBR pile – have heard so many good things about her books.

I loved Dying For Christmas, but I was so freaked out when I first heard what it was about because it sounded SO similar to The Venus Trap, which I was just editing at that stage. My mind was put at ease when I read it though – like you said, similar premise but very differently handled. I’d just been really worried that Tammy would think I’d nicked her idea! And yes, funny that we’ve only mentioned women. I must say I do prefer thrillers by women on the whole.

What’s your next project –are you working on another thriller? I’m currently finishing up the sequel to From The Cradle with Mark (Edwards). It’s called The Blissfully Dead and will be out in autumn. My other big project for this year is updating and re-publishing all my old solo novels with new covers, which is proving quite time-consuming.

Susi: *SIGH* It’s taken me a long time to get to my next project. I had several false starts, ending up with about 40,000 words – unfortunately not all of them were for the same book! I’m at the early stages of something else now though, something a bit different – a standalone thriller… and assuming that Black Wood does okay, I have a couple of ideas in the pipeline based in the same town, with a new cast of characters. Some will overlap though, Sergeant Davie Gray, in particular seems to be well liked, so we’ll see! Can’t wait for your sequel with Mark, I loved From the Cradle.

Listen to us, we’re like a mutual appreciation society, aren’t we?

Louise: We are! And – good, re Sgt. Gray, I was hoping we’d see more of him. I do love a sexy cop, don’t you? Thank you for your kind words, it’s been great talking to you, and I’m really looking forward to raising a real glass to celebrate our joint launches. Thanks to Liz too for hosting us!

Find out from Susi here: http://sjiholliday.com/

One Response to When Voss met Holliday….A characterful conversation.