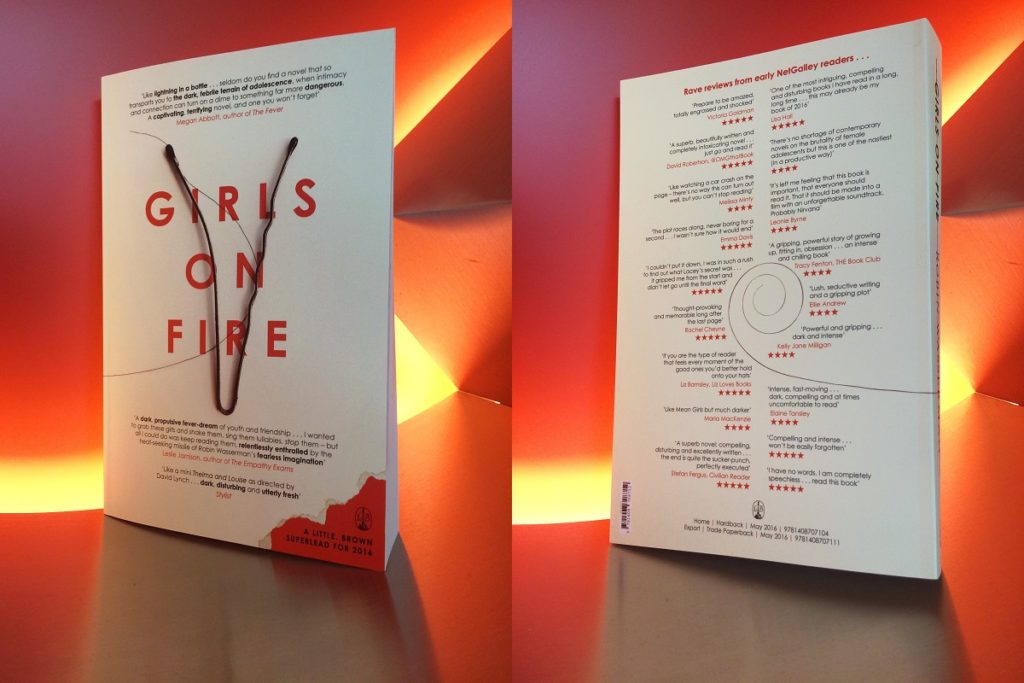 So Girls on Fire by Robin Wasserman has its release date tomorrow (5th May 2016) from Little Brown and to celebrate one of the best books I have read in my entire reading life (and that is saying something) I’ve given it a temporary page where it can sit on its own, I can tell you something about it and HOPEFULLY you’ll go read it too – then in a week or so this review will move over to the Highly Recommended page where it will live.

Right here we go then. Girls on Fire is simply incredible. When you see lots of people raving about a book sometimes you go “yeah yeah I’m sure its great” with a slight roll of the eyes but with Girls on Fire the reason everyone is raving about it is because of its sheer emotional impact – the indelible imagery that Hannah and Lacey will leave behind them when you come to the end of their story means you cannot do anything BUT rave about it.

I was one of the fantastically lucky early netgalley readers of this book, when I finished it I was a mess of emotional turmoil, this is not an exaggeration I was sat there shaking my head for ages trying to make sense of where I had been for the last few hours – oh yes another warning, don’t start until you don’t have to stop because stopping is impossible.

This is entirely down to the creative genius of the author, Robin Wasserman, who writes with a visceral, violent and heart stopping power that has to be seen to be believed. It is intense, emotional, thought provoking, heart stopping, an express train ride of a read which has you shouting NO at regular intervals, begging these two girls to slow down, stop, think about it – but they are an unstoppable force, little balls of hormonal energy who will have what they want no matter the cost to themselves or to anyone else.

Never has female friendship had such an intuitive eye and authenticity – as a parent this was tough reading at times, because you know that even though Girls on Fire is explosive, where everything is louder than everything else, still you recognise the power of the teenage spirit, that soon to be adult vibe where everything to THEM is louder than everything else. Put two total opposites such as Hannah and Lacey together, give them a mutual focus, just that one thing, and its so easy to see how things COULD explode and boy do they from first page to last. You will feel EVERY MOMENT of this, if you are an emotionally charged reader be prepared.

Robin Wasserman speeds up then slows down then speeds up again, the use of language to absolutely get you in the gut every little step of the way is stunning. Heading towards an inexorable, incomprehensible, fiery heck of a conclusion you sense things coming, you can’t stop them, you can’t get off this ride and nor do you want to even as you half cover your eyes and peer out wondering if anyone is going to come to the rescue soon.

Incredible story, incredible writing one HECK of an incredible book. Join the conversation, read it and weep.