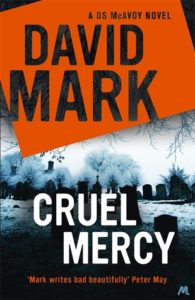 So for Cruel Mercy you sent Aector to the great US of A…what made you do that then?

I’m still not sure if it was my idea or Aector’s or simply a response to the fact I was reading a lot of great American fiction. It just suddenly felt important to broaden Aector’s horizons and mine too. I think I’ve shown that I can write convincing, compelling noir set in Hull and I was rather keen to see if I could do the same in a different location. As it turns out, it’s rather terrifying to plunge your lead character into a whole new world that neither of you are very familiar with. It left us both a little scarred but satisfied.

I try to be. I have happy, wacky kids and as such it’s impossible not to get caught up in all the carols and mulled wine and egg-nog (my second favourite nog, behind Noggin) but there will forever be a Scrooge element to me that scowls about all the hassle and expense and the people pretending they like each other. It would probably work better if we moved it to the summer holidays.

If you could suck the creative genius out of any other crime writer and use it as your own who would it be and why?

I think I would rather suck the marketing genius out of certain writers so I could work out how to become a juggernaut bestseller. But if you’re really asking, and you think she counts as ‘crime’, then Margaret Atwood all day and every day, as she is simply sublime in both character, story and delivery.

Which of the McAvoy novels has been your favourite to write to date and what was it about that one that stays with you?

The fourth book (and least read) was Taking Pity and I very much enjoyed that one as it had more of a split narrative and allowed me to write about crimes and personalities from the 1960s, which is an era that fascinates and inspires me. I’ve enjoyed writing all of them, to be honest. Editing, on the other hand …

Do you think you could pull off the perfect murder?

It’s very easy to pull off the perfect murder. Just kill somebody you don’t know. The trouble is, the only people I have ever wanted to kill are the people to whom I have quite an obvious connection so it hasn’t been worth the risk, as yet.

Who would you trust as your partner in crime?

I don’t trust anybody. Probably my daughter, Elora, as she has a dark soul and can lie very convincingly. But even she would blab in exchange for cake.

Favourite type of cheese. Everyone gets the cheese question…

We were (fairly) recently together at the launch for Susi Holliday’s Willow Walk which is a brilliant crime novel. How much do we love Susi?

I like most things and have always had a fondness for jazz, but I guess my era is mid-nineties, so it’s a lot of Britpop and banging Indie tunes. Anything that makes me feel 17 again. I don’t listen to music when I write as it turns everything into an overly dramatic scene with soaring strings and panning shots.

Probably The Ashes of London by Andrew Taylor, though I’m not one for ‘wow’. Expletives, possibly, or extraordinary jealousy at somebody’s literary superiority.

On a desert island that you’ve randomly crashed on for no likely reason whatsoever, which 5 people would you like for company and why? Assume you’ll be there for a while before rescue…

For a long time, my answer would have been that I wouldn’t any company at all. But I’m lucky to have found somebody who makes everything seem more tolerable, so my fiancée would be there. Elora, too, though she would be getting booted into the lagoon if she moaned about being hungry. After that, I’d take Monica Bellucci, Ray Mears and Nigel Farage. Monica to look at, Ray to keep me alive, and Nigel because it would bring me pleasure to see him deal with the existential crisis of being a foreigner on uninhabited shores.

Ok you can talk about the book a bit more now. Cruel Mercy indeed. You get 5 sentences to sell it. Go!

Three Irishmen went to America. One’s dead. One’s as good as. One is missing. The missing man is Valentine Teague. Petty criminal, bare-knuckle fighter – and DS Aector McAvoy’s brother in law. Back home, Val’s being held responsible for the blood spilt in the snowy woods of upstate New York. If McAvoy doesn’t find out the truth, all hell will break loose, putting his own family in the crossfire. Investigating proves harder than he could have imagined. New York City is a different world, with different rules. Soon, he finds himself up against squabbling cops, mafias old and new, and the culmination of a brutal crime forty years in the making. All McAvoy can do is the right thing. Even if it kills him…

Scallops and black pudding, followed by fillet steak with peppercorn sauce, then sticky toffee pudding, a cheese course, a coffee, a brandy, more brandy, an after Eight, maybe a Bailey’s, then onto the whisky. Actually, can I see a wine list …?

Are you a daytime person or more of a vampire?

I write during the day and think during the night so it’s hard to say. I’m not a great sleeper and I don’t have to go to an actual job so I’ve never really had to make that distinction. I’m certainly never going to be the last person to leave the bar and still be up drinking at 5am. I prefer to be in bed by 11 with a book – preparing for eight hours of gnashing my teeth and dealing with heartburn.

Talking of which if someone sat you down and made you watch ALL the Twilight movies do you think you could cope?

I can go into a happy place in my head and tune out reality so I can probably get through it. Twilight is the one about a teenage girl’s choice between necrophilia and bestiality, yes?

Yep that’s the one.

Grosse Point Blank, over and over. Rocky, The Untouchables, Amelie, The Godfather, Dances With Wolves, The Unforgiven, Million Dollar Baby, Arsenic and Old Lace, His Girl Friday … I could go on.

Does the kettle qualify as technology? I hate technology, to be honest. I have to use the damn stuff but I’d be delighted to go back 20 years and steer the world away from its obsession with phones and tablets and websites. I do think we’ve taken a wrong turn as a people.

Your personal favourite crime series….tv or book. Or both.

The Charlie Parker books by John Connolly are perfect. On a TV front, anything by HBO, though the BBC’s Waking the Dead was brilliant and should have continued. I think it should be given new life in novel form but nobody has made me an offer for the idea. I’m all ears.

I remain largely fond of you, though I do find myself yearning for all the foodstuffs I just listed and I’m aware my movie list will not get The Culture Show ‘Originality Prize’ people knocking on my door any time soon.

One’s dead. One’s as good as. One is missing…

Back home, Val’s being held responsible for the blood spilt in the snowy woods of upstate New York. If McAvoy doesn’t find out the truth, all hell will break loose, putting his own family in the crossfire.

Investigating proves harder than he could have imagined. New York City is a different world, with different rules. Soon, he finds himself up against squabbling cops, mafias old and new, and the culmination of a crime forty years in the making.

All McAvoy can do is the right thing. Even if it kills him... 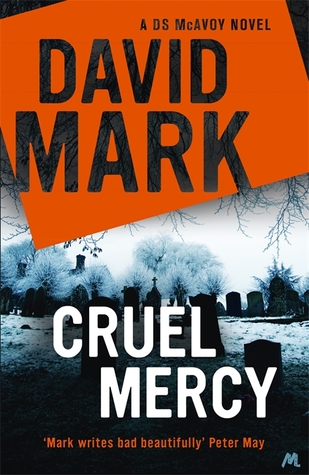