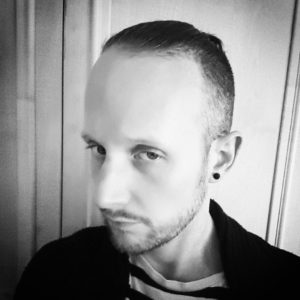 In the final part of Six Stories with Matt Wesolowski, I’m asking him my 20 Questions. Pop back tomorrow so you can read my review of the novel as part of the blog tour.

And the biggest thanks to Matt for taking part over the last few weeks with his great guest spots.

So up to now we’ve been discussing Six Stories over the course of a few posts – So lets just do this. Tell me Six things about Six Stories…

1. It was my first attempt at a crime novel.

2. The manuscript was nearly consigned to my hard drive as it was just an odd little experiment that I never thought would go anywhere.

3. I had to re-read the manuscript before I pitched it at Bloody Scotland festival as I had completely forgotten whodunnit and why!

4. I had no idea whodunnit or why as I was writing it until the end of episode 5.

5. The original title was ‘Five go mad on Scarclaw Fell’

Ready salted. You don’t mess about with crisps. Pitta chips if you can get them. Heavenly.

An author whose talent you envy…

Lauren Beukes. If that woman wrote the text for a bus ticket, it’d still be enthralling…

When writing Six Stories what was your main inspiration…

It was the Serial podcast, beyond anything else, the rest of the story just fell out of my brain.

I don’t eat dairy products so cheese is a no-go for me…Violife do a good smoked vegan cheese though!

Planned plotting or to hell with it lets see what happens…

I never plan anything. If I plan, it tends to kill the story dead. There’s a little graveyard of planned stories on my hard drive, all of them terrible.

3 famous people you’d like to be stuck with for a day just to see what they are really like….

Marilyn Manson – they say don’t ever meet your heroes, but Mazza’s the only one who I think wouldn’t disappoint.

Karen Kilgariff & Georgia Hardstark – the hosts of the ‘My Favourite Murder’ podcast; I think we’d have a great time chatting about true crime.

You are published by the amazing Karen at Orenda books. How much do we love Karen?

We adore Karen for being so much more to us than a publisher. I have never felt so supported before; so valued for what I do. She is a phenomenon.

The best thing about the road to publication….

The worse thing about the road to publication…

Awesome chef like skills or stick something in the microwave….

I actually used to be a chef and interestingly, have never owned a microwave (that’s not terribly interesting is it though really?)

One teaser sentence on what you are writing next….

You recently went on an Orenda road trip – how much fun was that?

It was amazing, the other Orenda authors are all lovely people and made me feel welcome and worthy in their company. It was an experience I’ll never forget, sitting on a train with some of my literary heroes.

I do love a bit of dark chocolate but I’m more of a savoury snack man.

What small irritating thing irritates you beyond all reason…

Oh so much, can I have a few? All are terribly inconsequential: Poor punctuality, apostrophe abuse, ‘expresso’ instead of ‘espresso’…I could go on…

Favourite day of the week (If you say Tuesday we can’t be friends. Tuesdays should die)

Saturday – it’s the day outside of school holidays that I get to spend all of with my son.

A book you recommend to everyone…

The Butcher Boy by Patrick McCabe…I’ve been pushing that one on everyone since I was 16!

Last thing that made you laugh stupidly…

My five year old son is the funniest person I know, he often comes out with the most hysterically funny things; the other day he turned around and said to me, apropos of nothing “Dad, I’m going to feed you to a bat!”

Most idiotic thing you have done….

Oh man, there are so many to choose from. I did a lot of idiotic things as a teenager; once sneaking into my friend’s school under the fence, wearing his spare school jumper and pretending to be a pupil. It was only when one of the hard kids threatened to batter me that I had to sneak out again and run…

You’re a book blogger, I have not the capacity to hate you…