Today’s victim, erm lovely author, who has tackled my 20 Questions is the rather wonderful Matthew Blakstad, author of Sockpuppet. Which if you havent read already you might want to check out. Helpfully Ive put some details below for you. Thanks Matt!

So these always start with a bookish question because, you know, authors – ALWAYS wanting to plug the books, sigh, so for those people I have not yet sold Sockpuppet to YOU do it. Only briefly. We have cheese and desert islands and things to discuss..

SOCKPUPPET is for everyone who’s ever worried that they’re sharing too much of their life online. It’s about two women who get caught up in a social media scandal, and find their lives being taken apart as a consequence – until they start to fight back. My aim is that everyone who reads it will flush their smartphones down the loo and run away to live in a cabin in the woods. And really: who doesn’t want that?

Talking of which, name a television advert which got stuck in your head. No don’t say you don’t have one we ALL have one **sings the Dr Pepper song** OOPS no not that one. Another one.

I am a nightmare for advertisers. I stream pretty much all my TV and music so I barely ever see or hear an ad. I have to look elsewhere for annoying earworms. For instance, every time anyone uses the printer at the office where I work, it plays a series of notes that sounds exactly like the refrain from Snow Patrol’s Chasing Cars and as a result I CANNOT GET THAT DAMN SONG OUT OF MY HEAD.

So Sockpuppet has a load of hacktastic whizzadry in it but the moral of the story is surely similar to the one in the definitive big brother novel 1984. So do we think Orwell was a psychic?

Orwell saw the world with merciless clarity but it’s worth remembering that in Nineteen Eighty-Four (to be pedantic about the title) he wasn’t trying to predict the future. He was commenting on the world he saw around him in 1948 (clue: reverse the last two digits of that year). But yes, he did end up as a kind of accidental prophet. He imagines a surveillance state where recent history is constantly rewritten by the powers that be; where everyone is kept in a climate of fear by an endless cycle of wars, against ill-defined enemies. Does that sound at all familiar? Though I guess the thing Orwell couldn’t predict is it’s not sinister government forces that are imposing surveillance on us: we’re doing it to ourselves, every time we use social media or a smartphone…

If you had to be stuck on a desert island (yes its time for that question) and there were only 5 other people with you, all of whom were fellow authors (lets say plane crash on way to some bookish thing or other) who would you choose and why? (I wouldn’t choose William Ryan by the way, he apparently only brings a passable sense of direction to the table but you know)

I would give any group of writers in that situation two months’ maximum before they starved. Maximum. So:

David Sedaris because he is the funniest man alive and he’s even funnier when he’s talking about why we’re all basically doomed.

Neal Stephenson because his books keep getting longer every time so he’d be able to keep us occupied during our slow descent into hunger and madness.

George RR Martin because then NOBODY WILL KNOW HOW IT ENDS EXCEPT ME.

And Cormac McCarthy because we’ll need someone to document our slow descent into Lord-of the-Flies-style dystopia.

How much do you love writing? I mean even when its all going pear shaped and your work in progress looks like some kind of monstrous mash up of non related words, do you still love it? How do you set about things…

It is a compulsion. Everyone who’s written a novel will tell you that. When I’m writing I’m in a different space-time continuum. I can spend a whole afternoon in that fugue state and when eventually I surface, it’ll feel like only moments have passed. One minute I’ve just finished lunch, then I look up and suddenly it’s dark outside. When I re-enter reality I feel bereft, like I’ve stepped out of Narnia.

Or to put it another way, writers are happiest when they can vanish from the world and basically not interact with any fellow human beings. We’re terrible people. The worst.

Favourite type of cheese (possibly the most important life question ever)

I can’t believe you’ve left it so late in the questionnaire to ask this one. Banon goat’s cheese, from the south of France. Obviously.

Talking of life questions what is the best piece of life advice you have ever been given?

That’s tough. I’m bad at taking advice, or hearing it when it’s given. How about this? The other day I saw an interview Michael Palin did with the travel writer Jan Morris. She said, ‘Kindness is more important than love’. I think that’s actually quite profound. Especially in our current climate of knee-jerk unkindness, on social media and in our politics especially.

Last thing that made you laugh. I mean proper full on giggling fit.

A Facebook update telling me a relative of mine had been in a bar in Copenhagen called ‘The Soft Cök’.

When you read books what books make you go ooh. Like romance? No I doubt it. Twists in the tale? They kind of have to be REALLY clever these days to actually fool discerning readers so maybe not. I’m assuming you are a discerning reader (as well as a brilliant writer) Yes that was blatant sucking up.

Thanks, I’ll bank that compliment for later. I’m not normally a fan of huge twists and stunning revelations because they tend to turn a book into a complex puzzle – and at worst nothing more than an exercise in deceiving the reader. It tends to be stunning writing that blows me away, not stunning stories. And often this can mean very plain, straightforward-seeming writing; because that’s by far the hardest to do. Recently this has meant Dave Eggers, Claire Fuller, Alison Bechdel, Dashiell Hammett, Andrew Hurley, Sarah Lotz… No particular genre.

If there was an *actual* murder at a crime festival (Lets say Crimefest seeing as how that is the last one we were both at) who do you think would solve it first? The police or the crime writers? My money would be on Sarah Hilary actually…

If the murder mystery writers all got together and planned a murder, Orient Express style, I don’t think ANYONE would ever solve it. Those guys are fiendish. Maybe this actually happened at this year’s Crimefest AND WE DON’T EVEN KNOW.

Tell us a tiny little bit about the next book….

LUCKY GHOST is a sequel to SOCKPUPPET (though both books stand alone). Where SOCKPUPPET is set in the present or very near future, LUCKY GHOST turns the clock forward almost a decade, to a world where people go about veiled in a fabric called ‘mesh’ that augments their experience of the world with stories, memories and ghosts. The book asks what will happen when technology starts to manage and manipulate not just the information we receive, but our very emotions.

How many pigs do you think you are going to have to draw for me before we are both gone from this world?

TBH I’m not sure anything I’ve done so far counts as a ‘drawing’. There’s a reason I’m a writer and not an artist. Many, many reasons.

Lets talk about publishing briefly. You are with Hodder. Do we like Hodder? I think a careful answer to that might be wise…Fleur is probably watching.

Hodder are amazing. But you know that. Specifically, my editor Anne Perry and her Hodderscape crew are doing something incredible at the moment. They’ve pulled together a rich and diverse list of writers who are teasing at the fringes of genre fiction and showing its full potential. Just look at this year’s Clarke Award nominations. Three out of the six shortlisted authors – Becky Chambers, Nnedi Okorafor, James Smythe – are with Hodderscape. I’m proud to be part of it. Srsly.

What makes you mad? Irrationally irritated? Wanting to throw things…

I don’t irritate easily. I don’t need to, with you doing all the getting-irritated on my behalf. But it does frustrate the LIVING HECK out of me how genre fiction gets side lined by bookshops, mainstream reviewers, etc. Really, if Margaret Atwood and David Mitchell can be ‘literary’ writers, why the heck is Becky Chambers still stuck in a dark corner at the back of the shop? Grr, rant, froth at mouth, etc, etc.

Just yesterday I sent a text message to a (male) carpenter that was meant for my wife. It ended with about twelve ‘x’es. I have not yet heard back from him.

Does your wife suffer fools gladly?

You mean because she married me? Thanks a bunch. Next question.

X+Y. Have you seen it? It’s a British indy about a bunch of schoolkids who travel to China to compete in the maths Olympiad. Beautiful movie with a couple of excellent maths proofs performed live on screen.

I havent watched it but I will now.

Write. And keep writing, even when it’s terrible. Nobody knows for sure whether they have a good novel in them, but if they do, it’ll be buried under two or three terrible ones. And the rule is, you have to get the bad ones out before you can get to the good one. So don’t wait for perfect. Put in your ten thousand hours and get a little better every day.

I don’t hate you, Liz. Because I have Stockholm Syndrome.

Read my review of Sockpuppet  HERE 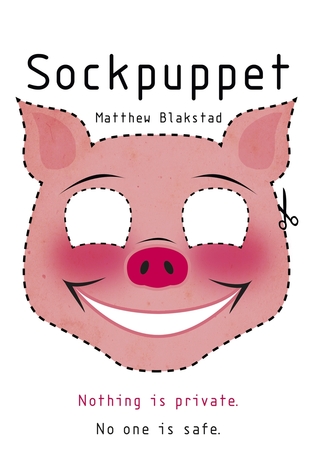