2016 Spotlight: A Time of Torment by John Connolly. 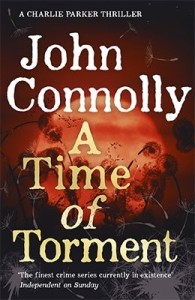 Jerome Burnel was once a hero. He intervened to prevent multiple killings and in doing so damned himself. His life was torn apart. He was imprisoned, brutalized.

But in his final days, with the hunters circling, he tells his story to private detective Charlie Parker. He speaks of the girl who was marked for death but was saved, of the ones who tormented him, and an entity that hides in a ruined stockade.

Parker is not like other men. He died, and was reborn. He is ready to wage war.

Now he will descend upon a strange, isolated community called the Cut, and face down a force of men who rule by terror, intimidation, and murder.

All in the name of the being they serve.

All in the name of the Dead King.

We are at Charlie Parker 14 now and honestly this series just gets better and better, each novel adding layers to the last, the mythology that John Connolly began creating way back in “Every Dead Thing” is brilliantly imagined, incredibly dark and insanely addictive. When I go into a new instalment my expectation is always high and this author meets and exceeds it every time, A Time of Torment was no different in that respect.

This had a slightly different vibe to it, shaking things up a bit, A Time of Torment is a slow burner full of tension and brimming with atmosphere. Following  Charlie and his indomitable sidekicks Louis and Angel on the one hand as they track and deal with some very bad folk, on the other we have the Cut – an isolated and inbred community hiding a terrible secret, who keep the wider world away using fear and often violence. When Charlie hears a strange tale told by a man named Jerome Burnel, the two sides are set on a collision course that brought me to one of the most chilling endings Mr Connolly has yet achieved in this series. Now the wait for more begins once again. I hate that part.

The Cut as a concept was extraordinarily chilling, the characters within it endlessly fascinating and very scary – with his usual flair for setting and descriptive prose, the author paints a picture and leads you towards the inevitable clash, the journey is once again dangerous and taut, completely riveting I was utterly gripped and fully immersed back into Charlie’s world once more.

The mythology deepens, Charlie’s daughters, one living, one dead are becoming inceasingly important to the whole – this layer which speaks to the ongoing saga is incredibly alluring and honestly creepy. Shiver.  The relationships between all the main protagonists are constantly in ebb and flow over the course of the entire body of work so far –  the absolute creative genius the author brings to the core storyline is what inspires comments like “the best crime series currently in existence” although for me personally I don’t like the crime tag for these when taken on its own. Yes it is crime in a lot of the elements but it is so much more, an epic and increasingly spellbinding series that has too many facets to call it any one thing.

On a personal note one thing “A Time of Torment” did for me was knock Stephen King off his perch, from this point on I will happily tell anyone that asks that John Connolly is my favourite author – I would dump a new King book for a new Connolly book in under 10 seconds, if he wrote a book a month it would not be enough for me. As an emotionally charged reader I need an emotionally charged novel and this is what I get every single time, so what can you do except acknowledge that and so I have.

Character driven, literary and always always bang on the money, from my point of view the Charlie Parker series is the best series currently in existence. Forget the crime tag.

You can purchase A Time of Torment by clickety clicking HERE

One Response to 2016 Spotlight: A Time of Torment by John Connolly.