2016 Spotlight: Try not to Breathe by Holly Seddon 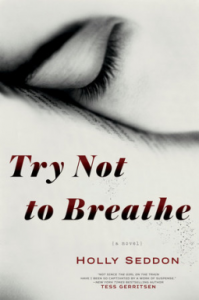 Source: Netgalley – via Ballantine with thanks.

Amy Stevenson was the biggest news story of 1995. Only fifteen years old, Amy disappeared walking home from school one day and was found in a coma three days later. Her attacker was never identified and her angelic face was plastered across every paper and nightly news segment.

Fifteen years later, Amy lies in the hospital, surrounded by 90’s Britpop posters, forgotten by the world until reporter Alex Dale stumbles across her while researching a routine story on vegetative patients.

Remembering Amy’s story like it was yesterday, she feels compelled to solve the long-cold case.

Try Not To Breathe was a wonderfully engaging and intense story – one to watch in early 2016 I have a feeling it is going to be a huge hit..

Amy had a secret – and her secret nearly killed her. Years later Alex Dale is fighting a losing battle with alcoholism and trying to reboot her journalistic career. Whilst on a story about vegetative and locked in patients she stumbles across a case she remembers well and decides it is time to try and find justice for Amy. Amy meanwhile is not gone – just forgotton.

The storytelling in Try Not To Breathe is of a really brilliant standard – Holly Seddon draws you into Amy’s world, via Alex and others and even Amy herself…it is beautifully done and emotionally resonant throughout. There is a strong theme of redemption running in the narrative, for Alex, for Amy and beyond,  that makes YOU hold your breath, waiting to see if they can all come out the other side intact.

The mystery element is underneath all that – the author weaves a web of relationships old and new – Jacob, Amy’s boyfriend at the time who has allowed this horrific act to impact on his marriage is a very sympathetic character although I did want to kick him at times. Alex herself is so realistically flawed that no part of the story is unbelievable – as for Amy, locked in her own head, struggling to understand, her occasional appearances underneath the external happenings just complete this so well and give it a depth of emotion that you feel in every bone.

As for what happened to Amy – well that part of the tale is drip fed in stunning style, leading you ever closer to a resolution you may not expect, one that you need as much as Alex does in order to move on. It has a psychological thriller element that feeds into the character driven portions pitch perfectly, making this a real page turner. Try not to breathe – this one may hit you unexpectedly.

Overall a great read. One of those that you know you’ll think about, imagining what might happen next. There is a completeness to it, but also speaking solely as a reader, I hope to meet Alex again – we’ll see. If wishing made it so…

One Response to 2016 Spotlight: Try not to Breathe by Holly Seddon