Advanced 2019 read: Do You Dream Of Terra-Two Temi Oh. 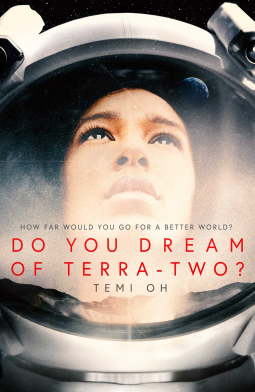 A century ago, scientists theorised that a habitable planet existed in a nearby solar system. Today, ten astronauts will leave a dying Earth to find it. Four are decorated veterans of the 20th century’s space-race. And six are teenagers, graduates of the exclusive Dalton Academy, who’ve been in training for this mission for most of their lives.

I’m in love with this book.

It is a hugely compelling character driven drama, from the feet on the ground to the start of an epic journey through space, by the time you come to the end of this gorgeously immersive debut you will almost certainly be dreaming of Terra-Two.

Mere children still when they start their training, Harry, Jesse, Juno, Astrid, Aria Eliot and Poppy have different feelings and reasons for their determination to be part of the beta crew who will spend over two decades in space attempting to colonise a new earth. Revered by the nation, thrown into the spotlight, all of this has an affect on their psyche. Temi Oh is a brilliantly descriptive writer when it comes to characterisation and interaction- you will be absorbed into their world, living and dying with them through every up and down.

As alliances grow and develop, as actions and consequences abound in various ways, as this small gang of pioneer’s go from being classmates among many to only having themselves and each other to rely on, you’ll be hooked, emotional and devouring every page. Do You Dream of Terra-Two is a very human story, in a lot of ways the fact that it is set in space is almost a secondary concern.

What it does is give the author a unique set of challenges and moral dilemma’s to throw at her group dynamic and within that explore every aspect of humanity and personality.

Completely brilliant, insightful and melancholy, this is a stunning debut and I adored every damned fine moment of it.

You can purchase Do You Dream Of Terra-two (Simon & Schuster) Here.