All the Devils….and Neil Broadfoot.

Today I’m having a chat (actually this was ages ago but I’m SO BEHIND) with Neil Broadfoot about All the Devils – his latest book available now from Contraband. And some other things. Then I’ve written a little review for you so you all immediately rush out and get it. I mean it was pretty good…an ok read you know? I am of course kidding it was brilliant. Thanks Neil for taking the time. Alhough to be fair you’ve had a lucky escape. We did this before I started the 20 Questions…I’m feeling a return visit may be on the cards…

Where do you get your ideas from then? NOOOOO I am kidding I don’t care (sorry) and admittedly this is the first of this series I have read – however I’m going to go backwards for sure because whilst it had no impact on the readability of All The Devils I really want to know what happened exactly to poor Doug and to Susie prior to the start of this latest. Perhaps you could indulge me and tell me a little about their relationship so far before those devils arrived…

Doug and Susie have a somewhat complicated relationship. They first met when there was a rumour that a married senior officer had a drunken dalliance with a junior officer at a police Christmas party. Doug being Doug, it didn’t take him long to put the pieces together and figure out that Susie was the junior officer. But instead of writing a story that is just “red top tabloid shite”, Doug uses it as a way to introduce himself to Susie. Over time, and with the situations they’ve faced in Falling Fast and All The Devils, they’ve grown closer and a friendship has evolved. That doesn’t mean Doug won’t cut her off to get to the story first, which lands him in hot water in Falling Fast, and Susie has a fine line to walk between the benefits of knowing Doug and having access to his contacts and the potential damage it could do to her career. But it’s an evolving relationship, and All The Devils has left them with some big questions to answer.

For me, writing is an organic process, the stories tend to take on a life of their own and I just follow along. When I’m working on a book, I’m writing it for myself as much as the reader as I really want to know how it all turns out- and usually I don’t know that until I’m a couple of chapters from the end. I usually start with a scene in my head and work my way out from there. All The Devils is slightly different as the core of the idea was something that happened in the first book, Falling Fast, that I wanted to go back and explore.

I think the seat-of-the-pants, little planning strategy of writing works in All The Devils. As you say, Doug is put in a near-impossible situation and has to make some hard choices in a short period of time. If I’d overly planned that I think it would have stymied the writing and bled out some of the drama and tension of those scenes. As Stephen King says, the best writing to me is when it’s fresh and jumping off the page. My only real rule is to leave a chapter on some kind of cliffhanger or reveal – other than that, I’m along for the ride. And it’s always a lot of fun!

Your setting is Edinburgh – presumably somewhere you know well? Why choose there – I know Scotland has such great locations to offer, which is why I love fiction set there – and whereabouts do you hang your hat these days?

I was born just outside Edinburgh, in a place called Eskbank, so Auld Reekie is my home town. I worked in Edinburgh for years as a reporter on the local paper, the Evening News, before moving on to The Scotsman and doing a stint in the Scottish Parliament. All that gives you a feel for the place, you get to know its rhythms, how the people act, what the character of the city is, so it was only natural that I would write about the town. And Edinburgh is such a great backdrop, from the grandeur of the Old Town to the dilapidation you can see in some of the housing estates, it really has got everything a crime writer could want.

These days I live across the bridge in Dunfermline, which is where I cut my teeth as a reporter on the local paper. When I was working there (and commuting back to Edinburgh where I was living at the time) I always knew I wanted to get back to Fife, so when the opportunity to move there with my wife presented itself I jumped at the chance. It’s a beautiful place to stay, being the ancient capital of Scotland and the birthplace of the first philanthropist, Andrew Carnegie, it’s steeped in history. It’s also a cracking place to set a crime novel- watch this space!

In the future writing stakes what is the plan? Presumably more in this series (because really if you leave it there I’m likely to glare) but are you tempted to write a standalone? Possibly a completely different type of Crime – or even moving away from Crime altogether…

It’s funny, I never really set out to write a crime novel or become a crime writer, I just had an idea and ran with it- 80,000 words later, I had a crime novel on my hands. That said, I’ve always loved the genre and I love writing it, so I’m happy to keep doing so. You don’t need to glare, Doug and Susie will be back as there are a hell of a lot of questions raised by All The Devils, personally and professionally, that demand answers. I’m actually working on the fourth book right now.

I’ve got a few ideas for standalones and other series, playing on different aspects of crime. However, I owe my oldest friend – who, incidentally designed the covers for my books – a “really gruesome horror novel”, so I’ll have to do that. I actually started out writing horror, which I think shows in some of the more violent scenes in my work, so that’ll be a bit like going home in a lot of ways.

For a bit of fun let’s do the Dinner party question. Who would you like to have over for dinner, fictional or real, alive or dead and why. Let’s say you have 5 choices…

Good question- and not an easy one to answer! Growing up on his work, I’d have to choose Stephen King; finding On Writing was like discovering a map when I was lost in a forest, it showed me how to write a full-length novel.

With the insanity we’re seeing in the world right now, I’d love to hear the thoughts of the late comedian Bill Hicks. He was a true visionary, with a piercing insight into the events of the time, and I think he’d keep everyone both doubled up in hysterics and gripped with his observations on where we are now.

Slightly more serious, but I’d love to meet and have a conversation with Barack Obama. He’s handled the US presidency with such grace and dignity, while under what must be incredible pressure and in the face of rabid opposition, that I’d love to see how much of it is the political ‘face’ and how much is genuine.

My neighbour spent a few years in South Africa and came back the king of braai (barbecue). He even barbecued a whole meal for all of us one Hogmanay, standing at the back door with a cycle light on his head in about -2degrees! He also keeps up with me on the whisky, so he’d have to be there as braai cook and fellow dram buff.

And, of course, I’d have to invite Doug McGregor to the party- after what I’ve put him through over the last three books, the least I can do is treat the guy to a good meal and a bucket-load of booze!

Finally, putting you on the spot, if you could only take ONE book and ONE person (apart from family who will be there with you) to a desert island when for some reason I can’t think of at the moment you have to go there and live for a bit, what and who would it be?

Awww, now that’s just unfair! Whittling it down to just one book is almost impossible! If we’re trapped on the island, then I’d take a book on raft-building and a survival expert like Bear Gryls – I’ve got a family and a new Doug and Susie to get back to! And, after all, I can’t risk the wrath of your glare, so I’ve got to get back to get it finished!

Crime journalist Doug McGregor is all bent out of shape – still recovering from a savage encounter with a psychotic killer, he also has dark secrets to hide. But Doug has to put aside his own demons when friend and contact DS Susie Drummond needs his help to investigate the brutal murder of her ex-lover. When a gangland power struggle erupts into violence on the streets of Edinburgh – and much closer to home – Doug and Susie’s already tense relationship is sorely tested. Together they confront a conspiracy that reaches deeper than even a cynical hack like Doug can imagine. As Doug’s about to find out, all the devils are here – and none of them want him to discover the truth.

Admittedly All the Devils surprised me somewhat with how much I loved it. On the surface I was fairly sure I’d like it but in the end I raced through it like that grasshopper on acid again because it is sharp, relentlessly compelling and terrifically realistic.

Incredibly stupidly (on my part) this is my first foray into the world of Doug and Susie and basically resistance was futile. The Edinburgh setting, the distinctly drawn character lines and the very tense at times plot just hooked me right in, it only took like 2 pages or something. Almost a record.

Intriguing and violent themes explored in the plot, powered by two very memorable and genuinely fascinating characters in Doug and Susie – and the rest for that matter – makes this the very definition of gritty crime fiction. Gritty meaning great in my book. Neil Broadfoot writes with the kind of hard hitting reality that digs deep and you can call me a convert right now. I shall be reading backwards (somewhat) and then hopefully forwards. Assuming Neil gets off that desert island… 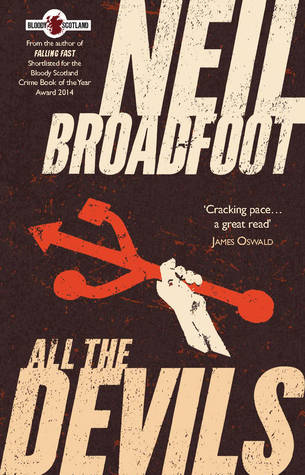