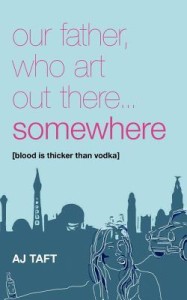 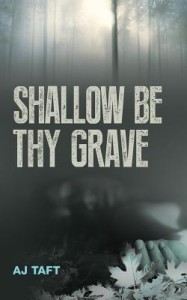 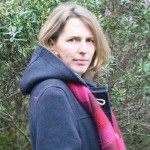 I recently read two novels by Alison Taft featuring main protagonist Lily Appleyard and I thought they were terrific, so I asked Alison a few questions and here is what she had to tell me.

Tell me a little bit about how the story started for you.

They say your first book is always autobiographical, and that’s the case for Our Father, Who Art Out There…Somewhere. It’s based on my own experiences of trying to track down a reluctant birth father. (I promise I never kidnapped anyone though). In my mid-thirties and following the birth of my two children, I felt the need to find out more about my father and his side of the family (he left home the day I was born). I wanted to ask questions about my genetic heritage. He refused to have any contact with me.

I was so mad. I was at home being run ragged by the demands of two small children and all I was asking for was the opportunity to ask a couple of questions. The anger became the fuel that powered the writing process

How much did the story and characters develop over the course of the writing ?

That’s an interesting question. At the time I was struck by how my birth father could say he had no wish for contact without knowing anything about who I was, or what my circumstances were. I thought, ‘I might be in real need here, and you don’t care.’

Lily, the main character in the book, is a nineteen year old girl whose mother’s just died. I asked myself, “who is the worst person this could happen to?”

So, I had a character and I had a problem. Lily wants to meet her dad. He doesn’t want to meet her. I wanted to raise the issue of whether she has a right to meet the person who fathered her. However, once I sat down and started writing the story took on a life of its own. That’s the most exciting part of writing.

I never intended to write a series but sometime after Our Father was published I realised the anger had gone and it became more about grief. I have to grieve the fact I will never meet my father, or any members of his family. Shallow Be Thy Grave came out of that grief. Perhaps all books are attempts to answer questions. The question behind Shallow was, ‘How do you mourn someone you’ve never met?

Do you have a favourite character from the books, apart from Lily?

I’m very attached to Aunt Edie, and Bert The Perv, mainly because they both love Lily. Lily and Jo’s friendship is one of my favourite aspects of writing the books, because female friendship for me is one of the strongest bonds of all.
Will we meet Lily again in future novels?

Yes. I’ve just finished the third in the series, which is called My Time Has Come. It will be out later this year. Bert asks Lily to find his missing wife (last seen on his wedding day) and the search takes Lily to Thailand. It’s been the most enjoyable one to write so far, I think because it’s not so personal anymore. Maybe I’ve written out most of my issues. Now that would be something…

No, I fly by the seat of my pants. I’m firmly of the ‘no planning’ school. Like Stephen King says in his excellent book, On Writing – the excitement of writing is the excitement of going into the unknown and allowing a story to unfurl.This can be a very frustrating process – I have two complete manuscripts that never came to life, but when it works, it’s just the best feeling ever…

Coffee, Tea or Other?

Peppermint tea or skinny hot chocolate or water. Nothing else…

Book you recommend to everyone.

Take a bath, potter in the garden, feed the ducks (the ducks are in the park, not the garden…

Thank you so much Alison!

Our Father Who Art Out There Somewhere.

A very clever and emotional story, here we meet Lily Appleyard for the first time. When she loses her Mother she struggles with heartache and begins to wonder about her Father, who she has never known. When she discovers he is alive but has no intention of getting involved with her, fuelled by grief and vodka she takes matters into her own hands. What follows is an emotive and compelling “coming of age” tale with some highly intriguing characters right at the heart of it, exploring some interesting outlooks on the meaning of family.

I loved Lily – impulsive and wonderfully drawn, despite her rather strange reactions, she is utterly believable. Nothing is as straightforward as it first appears, not least Lily herself and as the story twists and turns this is addictive reading. I do love a book where the characters speak to you, Ms Taft has a unique way with words that really gets you right to the heart of the matter. Without giving too much away I’m certain that you will be at turns surprised and delighted by the ongoing drama and it might give you pause for thought on how you view your own life and family.

The telling thing with this novel was the fact that when I had finished it I immediately picked up the second story featuring Lily – I did not want to wait. So do yourselves a favour and have both to hand – just in case.

Shallow Be Thy Grave

So the second novel featuring Lily Appleyard  – This one heads far more into the “mystery” genre and solidifies some of the events of book one. Lily and her newly found half sister Fiona have a rocky relationship – but when Fiona disappears, Lily sets off on a journey to find her.

Once again I was struck by the characterisation and emotional resonance of the writing here – even though its a very different book in a lot of ways the heart of it remains the same. As Lily searches the sense of place here is also terrific – I could almost imagine myself right there in Paris and Amsterdam. Lily has a sense of obligation here, feeling responsible for Fiona’s disappearance, as she heads into the world of sex trading and the darker side of human nature, this is compelling stuff indeed.

Also again, the exploration of family, especially with relation to sibling rivalry is highly authentic even given the circumstances – Lily discovers things about herself as much as about her sister and this is engaging and fascinating reading.

I also found that I got to know Jo, Lily’s friend, a lot more in this book than the last – she’s probably one of my favourite characters here.

Overall the two novels sit extremely well together and I thought both were fantastic. I’m very pleased to hear that we will visit again with Lily – I’m interested to see what is next for her.

Once again, very much recommended. And read them in order!