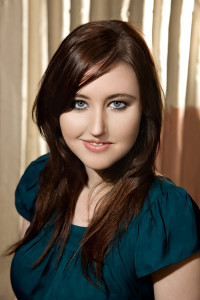 I recently read “Fury” – Book One of The Cure from Charlotte McConaghy and I was totally addicted. You can read my review again in a while, but first I asked Charlotte some questions and here is what she had to tell me.

Tell us a little bit about where the story came from.

I had the character of Josi in my head long before I figured out the rest of the story. I knew I wanted to tell the tale of a woman who believed she was transforming under the moon, who was burdened by the fear of having committed atrocities, and I didn’t know initially if it was going to be a real transformation or a figment of having endured such a traumatic childhood. The world came when I realized that I wanted to counteract Josi’s fury, and what better way to do that than with a society that has lost the ability to empathize with anger? The world gradually took shape after that, as I realized I wanted to look at why we sometimes seem so frightened of extreme emotions, and like science-fiction should, it looks at what might happen if we continue to be frightened.

How much do you believe that emotions such as anger define us, do you think we could live without our darker sides?

I don’t think that any one emotion defines us—I think feelings are fluid, ever- changing and very difficult to define. The idea of dark sides is always one that has thrilled me, because I suppose the idea in itself conjures a sense that a dark side is a rebellious side, one that doesn’t conform, doesn’t fear, but instead lives in the thick of desire and indulgence. There are other dark sides, too, darker dark sides, made of anger and cruelty and fear. I’m not going to make a judgement on what people should feel or want or how they should behave, because I think the point of my novel Fury is about people’s right to be whatever they are.

One of my favourite lines from Brave New World by Aldous Huxley reads, “I’d rather be myself. Myself and nasty. Not somebody else, however jolly.”
Josephine is a highly intriguing character – did she change much over the course of the writing?

Very much so, actually. She was a whiney, complaining nag in the first, ancient draft. Haha. I wrote a very different, simplified version of the story years ago, and then dusted it off to take a read later, horrified by what I found. So I rewrote the whole thing, and though the major story beats remained the same, Josi’s character needed a huge overhaul. She was one-dimensional, she was miserable, and frankly she was just a pain to read. So I worked hard to give her depth and insight—I wanted her to have a great sense of humour, to be dry and sarcastic and clever. I wanted her to be able to laugh in the face of her horrible, tragic life, because that’s as natural as moaning about it is.

Can you tell us a little about whats next for Josephine and Luke?

Well I’m currently writing book two in the series, which is set, as the cliffhanger at the end of Fury suggests, in the west. I don’t want to give too much away, but the book has a host of new characters, deals with the idea of the cure for sadness, and is still told from the perspectives of Josi and Luke. It’s also very romantic.

Laini Taylor is my favourite author at the moment, her novel ‘Daughter of Smoke and Bone’ my favourite.
Favourite thing to do on a lazy Sunday.

Go to the cinema. Drink wine and eat cheese. Hang out with friends. Luxuriate in a Game of Thrones marathon.
3  people alive or dead you would love to go for a drink with.

King Arthur, Lady Guinevere and Sir Lancelot. Haha! And let’s pretend they’re real. Oh, man, that would be the best.

Thank you SO much Charlotte!

Charlotte grew up with her nose in a book and her head in the clouds. At fourteen, her English teacher told her that the short story she’d submitted was wildly romantic, so she decided to write a novel. Thus began her foray into epic fantasy and dystopian sci-fi, with sweeping romances, heroic adventures, and as much juicy drama as she could possibly squeeze in.

Her first novel, Arrival, was published at age seventeen, and was followed by Descent, which launched The Strangers of Paragor series, an adventure fantasy for teenagers.

She then wrote her first adult fantasy novel, Avery, the prologue of which came to her in a very vivid dream. Her second adult novel, Fury, is the first in a romantic science-fiction series called The Cure, set in a dystopian future.

Charlotte currently lives in Sydney, having just finished a Masters in Screenwriting from the Australian Film, Television & Radio School. With her television pilot script, she won the Australian Writer’s Guild Award for Best Unproduced Screenplay of 2013. She will, however, always be a novelist at heart, still unable to get her nose out of the books.

When emotions are erased from the world, creating a civilization of mindless drones, only those with fury can survive.
On the same day each year Josephine Luquet wakes naked, shivering and covered in blood that is not her own. Under the cold gaze of the blood moon she is someone else entirely, but when dawn breaks her memories flee and she is left with only an icy horror, a burning fury. Amid a sea of drones, she alone hasn’t been cured.

The first thing that I have to say on this one is that it has been a while since a novel in this genre has captured my imagination so utterly and completely that I have literally gulped it down in huge magnificent chunks of reading joy – and come out the other side feeling utterly destroyed that now I have to hang on in there to find out more. I need more I tell you! Book Hangover alert!

So we meet Josephine – from the confines of a psychiatric hospital she tells her Doctor a strange and wonderful tale – and tries desperately to warn him of the danger that surrounds anyone who is close to her at one particular time of the year – a time that is fast approaching. As her tale unfolds, a picture emerges of a cold world – one where emotions are non existant and the ability to feel love, fear, anger, betrayal, almost anything that makes us Human have all but disappeared. Except for Josephine. Well, maybe…

This was a beautifully constructed story – with a highly imaginative and compelling premise – just what WOULD we be without our emotions? I really do not want to go too much into plot detail, the reasons, the truth that lies just beneath the surface, and what may or may not happen because of it – these are the things that make this book so fascinating, such a great read and a truly brilliant page turner that will often have you on the edge of your seat. Don’t make assumptions. I’m just saying…

Characterisation is of a very high standard, Josephine is damaged, uncertain, absolutely sure that she cannot be helped, she just wants to avoid hurting others. The people she meets along her journey are all enigmatic and there is a lot to be revealed – the author leads you slowly but surely through the minefield of a world gone mad..and puts you right at the centre of one girl’s struggle to understand it all.

I would place this book on the cusp of YA and Adult. It has a definite eye towards the YA audience but tackles some very adult themes and does involve occasional sex and violence – I don’t like to put books in boxes but I think that anyone aged around 15 and up will love this and find something to spark their imagination here…

Clever and captivating, at times enchanting and with an ending that will send you into a spiral of dismay at the thought of having to wait any time at all for the next instalment, I highly recommend this one.