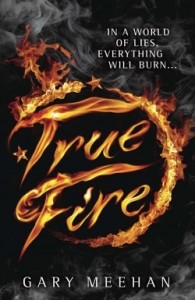 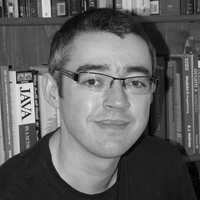 I recently read the first two books in the True Fire trilogy – SO addictive and with some truly terrific main characters and really strong female leads which I always love in a book, I basically read True Fire in one sitting. True Dark followed very shortly thereafter, now I’m really REALLY impatient for the final novel. I will have a full review up for both books in the Fantasy section of this website very soon and they absolutely come HIGHLY RECOMMENDED from me. In the meantime I tracked down the author and asked him a few pertinent questions. Well, stuff I really wanted to know anyway….Here is what he had to tell me.

What was the inspiration behind True Fire, what started the idea in your head?

The initial idea was that of a girl swimming through a submerged tunnel, fleeing from something, looking to cleanse herself of what had been done to her. I came up with the notion of a returned Evil Force and kicked the idea around for a while, might have been years. It was only when I thought about stripping all the actual fantasy from the fantasy story that everything clicked. I was going to have a religious war based in a typical western medieval fantasy world, but instead of magic one side was going to have gunpowder. And not the good side.

There are several strong female leads in the series – do you have a favourite?

As a man of a certain age, I have to nominate Eleanor. I wanted an adult character in a YA novel who wasn’t incidental or useless or evil. She’s snarky, a bit of a snob, and is possibly too fond of a drink, but she’s loyal and fierce and doesn’t take shit from anyone. She also has her own agenda too, and it doesn’t necessarily coincide with Megan’s, so you have underlying conflict between the two of them to season the mutual dependence.

The dialogue is often very humorous – How hard is it to walk the line between humour and the serious side of the tale.

Very hard, if you ask my editor. You adapt the humour to the scene. A fast-moving action scene has a lot less gags than a fireside chat, and what jokes there are tend to be blacker and more desperate. I do think a comic edge is essential in writing, otherwise you end up with something po-faced and flat. Plus, we’re British though, making jokes about everything and anything is what we do.

Can you give us any hints as to what might be coming in the finale?

About eighty-five thousand words at this rate.

Okay: a pair of queens; the return of a prodigal; an unlikely romance; the turning of tables; friends becoming enemies; enemies become, well, not friends but less enemy-ish.

Nineteen Eighty-Four. It’s not only a powerful story about a man’s struggle against the system, but it’s packed to the brim with ideas on politics and society and language and manipulation and just how far we’ll sink when threaten with the rats.

Best book you have read this year.

This is where I’m going to have to admit I’ve not read much this year: been busy with work, writing and fighting with the cat for possession of the chair. I’m going to nominate Us by David Nicholls, which is about a middle-aged scientist trying to save his marriage to his arty wife and connect with his teenage son. After reading mostly YA recently, it’s nice to have something that speaks to you personally.

As she prepares to tell her family, the unthinkable happens. Her village is razed by soldiers: her grandfather murdered, her twin sister taken.

On a desperate mission to rescue her beloved Gwyneth, Megan discovers a terrifying truth – that the destruction of her old life is inextricably linked to her unborn child. The feared witch soldiers, vanquished a generation ago, have returned to see the fulfilment of a prophecy: one that will put Megan and her new friends – Eleanor, a fiery ex-aristocrat, and Damon, a wayward charmer – at the heart of the greatest war her world has ever known.

With the help of her two companions–Eleanor, an eccentric aristocrat and skilled swordswoman, and Damon, a strong-willed charmer with a dark past–and armed just with her wits and determination, teenaged Megan now faces a world of danger with a newborn infant on her hip. The unstoppable witch army is growing in strength as it strives to seize absolute power, but a prophecy hints that their aims are connected to the fate of a child–Megan’s newborn daughter. Hordes of witches are closing in on the small group of adventurers, but they may have underestimated the lengths to which the newly empowered Megan will go to protect her child.

Reviews coming very soon but seriously you don’t need to wait – if you love YA Fantasy you will adore these!