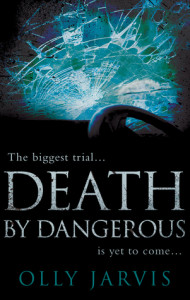 Very happy to welcome Olly Jarvis to the blog today talking about his Crime Thriller “Death by Dangerous”.

I specialise in defending people who have killed whilst driving their car – otherwise law-abiding citizens facing the emotional and mental pressures of a criminal trial, let alone the prospect of prison. Often, trying to come to terms with what they have done, destroys them. I had to write about this. But there are also other issues I wanted to explore, in particular the way in which so many of us live busy, exhausting lives, working virtually all the time, constantly worrying about paying the bills. Feeling guilty for spending so little quality time with our children. Death by dangerous is about realising what really matters before its too late.

Your background means you have a great knowledge base to draw from in the writing of a legal thriller – Can this also be a hindrance in wanting to keep it authentic but still writing a page-turner?

Yes – this is a fundamental consideration in my writing. It must be authentic – my colleagues at the Criminal Bar would expect nothing less! There is a fine balance between weaving in enough legal detail for the story to make sense and yet still maintaining the flow. I wrote several drafts and repeatedly edited until I felt I had a believable novel that moved at break-neck speed. I ‘m sure the success of American legal thriller writers is due in large part to their ability to strike the right balance.

What made you want to write? Who are your reading influences?

I always wanted to write but believed the demands of my job were so all engulfing that it would never happen. One day, after just finishing a multiple fatality death by dangerous trial, I decided that it was now or never – and I couldn’t continue to defend people, week after week, without any down time. It was one of the best decisions I ever made.

John Grisham, particularly his earlier books. I am also a big fan of screenwriter Aaron Sorkin who wrote the movie A Few Good Men. I love films which is probably why I write in a filmic style with short chapters.

My next novel, Cutthroat Defence, out next year, is an underdog story. The main character is straight out of pupillage. Totally out of his depth, he gets caught up in a very high profile trial. Another fast-paced, twisting legal thriller, but also a coming of age story, which I hope will show the reader how difficult it is to make it at the Criminal Bar.

Going to the movies with my kids and my partner – if I don’t have a brief to prep for Monday!

3 people alive or dead you would like to have a drink with.

Richard III (I am fascinated by quirky, driven people).

John Anderson is one of the North West’s most dedicated and successful prosecution barristers. His career is going from strength to strength and he is on the verge of becoming Queen’s Counsel. But the life he once knew suddenly comes crashing down following a fatal road traffic accident…

“They’re saying it was your fault. Someone died.”

Recovering from his injuries, he has no memory of the collision. Was he responsible for the death of a child? Who was his female passenger?

Clever book this, I do like a clever book.

So anyway, John is a barrister who is in a car accident in which people die. Trouble is he can’t remember a darned thing and has no idea who was with him in the car and why or, well, anything. Criminally charged, a fight to prove his innocence begins.

Really enjoyed this – fast paced and intriguing – I was particularly fond of main protagonist John who had a great authenticity about him, becoming more likeable as the book moves along, I really did get involved with all his problems.

Wider characterisation is great as well, this pops along, I was utterly engaged throughout. Not saying much about the plot beyond the blurb because in this case its seriously hard to do without spoilers I WILL say that it is very cleverly constructed and addictive throughout.

The author obviously has a wide knowledge base and brings that to this tale of woe, giving it a great layered feel and a great perceptive depth to the nuances.

One Response to Author Interview: Olly Jarvis on Death By Dangerous.