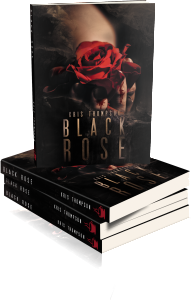 Kris Thompson is a veteran of the US Navy and single mother of three. When she’s not knitting scarves, chasing her children around or baking, you’ll find her enjoying a good book or writing down notes for her own upcoming stories. Writing has been a passion for Kris for many years, and seeing those stories printed on paper is a dream come true.

Lillian Locke had the perfect life in Boulder, Colorado. She had the boyfriend of her dreams, a wonderful family, awesome friends, and a spot on the track team at a great college. There wasn’t anything life could throw at her that she couldn’t get through . . . until he found her.

Lillian never could have imagined being abducted and chained up in the dark. Worse yet, being just one of many girls kidnapped and held captive by a madman. All she can do now is hope that she survives the brutality of their captor long enough to find a way to free herself and her new captive friends.

When Richard Haines’ girlfriend goes missing, he makes it his personal mission to find the woman he loves and bring her home to the safety of their loved ones. Seeking the help of friends and family, Richard abandons everything except for his pursuit of Lillian. But when someone else close to Richard goes missing, and the bodies of the abducted girls start showing up in the hills outside Boulder, the only thing he can do is hope that he finds her before it is too late.

I read this in pretty much one sitting, so well did it flow and for the most part I thought it was a terrific psychological suspense novel, with a realistic twist generally speaking and it definitely packs one heck of an emotional punch.

The most resonant part of the novel for me came with the relationship between Richard and Lillian – the author has done a terrific job of telling us a love story, creating a couple I believed in and then hitting them with the worst case scenario and making me avidly turn pages as Richard desperately searches for Lillian whilst she desperately struggles to survive.

It was cleverly written jumping between Richard and Lillian and telling what they were going through and here was where it was the most authentic.

There were some downsides which were purely subjective – I couldnt quite get my head around how the girls behaved occasionally whilst in captivity.Sometimes that did not ring quite true for how traumatised I would imagine they would be under the circumstances although of course no-one who has not been through such a thing could have any actual idea. Discussing the relative benefits of one good looking star over another for example, not long after you have been brutalised, just took me out of the moment.

Overall however this was a great read, not for the faint hearted, but a very addictive and often emotive story – another plus was the story came to a proper and satisfying conclusion showing aftermath as well as event which added to the overall ambience of the tale being told.