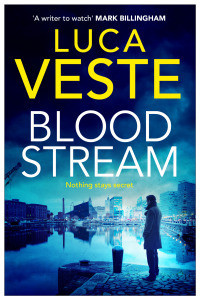 Today I am really REALLY pleased to welcome Luca to the blog as part of the official tour and I was lucky enough to get to ask him some questions about latest novel Blood Stream.

Tell us a little about the inspiration for this particular adventure for Murphy and Rossi.

The inspiration came from a number of sources. Seeing how social media was changing the national conversation, how 24 hour news affects reporting on major crimes, how famous people are treated as somehow above “normal” people. Those things mixed together formed the idea behind the book. I wanted to see how a criminal investigation works with all those factors at play.

The main theme for me is secrets and lies. It was the idea that all relationships contain some kind of deception – no matter how small – and this cynicism led to the central idea. Someone is targeting people in relationships who hold secrets or lies to their partner… would any of us survive?

The story has some focus on the onslaught of Social Media – What are your thoughts on the benefits versus the downside of 24/7 news and internet anonymity ?

I think it brings people closer in some ways. It strengthens relationships, builds friendships, opens up paths which were closed before. With everything though, we as a species find a way to ruin it! Internet anonymity is useful when used for reasons of safety. If that was all it was used for it would be great, but it’s also used to avoid responsibility. People use anonymity to intimidate and destroy, which skews my view on the innate good of social media. 24/7 news… I don’t see many benefits with it. Mainly because it just becomes a repeat of the same thing hour upon hour, until a major news event hits. Then, it just becomes a sea of rumour and untruth for the most part! Which begs the question for me… what’s the point in it being 24/7?

Writing series fiction must be challenging – do you plan far in advance as far as the main character story arcs go?

I plan a few books in advance, but I’m easily sidetracked. If another idea comes to me, I’ll use that first. Writing a series has many challenges, but it also gives you a framework to start from. Characters, setting, those important parts of a novel, they’re mostly already there. I enjoy writing about Murphy and Rossi at the moment.

Are you tempted to write a standalone novel?

The idea of writing a standalone becomes more and more tempting with each finished novel. I think I will at some point, but for now, there’s more tempting Murphy & Rossi novels to write.

As far as your own reading goes, any books you’ve read this year that you would highly recommend?

My top three reads of the year so far… The Death House by Sarah Pinborough – I Know Who Did It by Steve Mosby – What Remains by Tim Weaver. Each different in their own way. Each also made me shed a tear in a totally manly way.

Can you tell us a little about what is next for Murphy and co?

Currently working on book four in the series. Not much I can say about it at the moment, but it concerns historical child abuse in children’s homes and how it effects people years later. So, as light-hearted as my novels usually are!

So the third novel from Luca Veste then and each one has been an absolute joy for crime fiction fans – Blood Stream is no exception to that, I completely devoured this in two sittings, an extremely addictive and excellent read.

Two reality tv stars are discovered dead and Murphy and Rossi are under intense media scrutiny as they attempt to unravel what happened. When more couples turn up the same way, things only get more difficult. Meanwhile Rossi is in a new relationship and Murphy is still struggling to mend his own friendships after the emotive events of The Dying Place.

I just love the way Luca Veste writes – an involving, immersive style that just simply hooks you – never fails to give you a starting line that pretty much ensures you are not going to want to put the darn book down and then continuing in that vein all the way through. Gritty but not untamed there is a great authenticity to the feeling of it and the plot fairly rockets along taking you on a journey into some dark and twisted places.

Murphy and Rossi are fast becoming one of my favourite crime duo’s – their relationship is well imagined and very compelling, both have an intriguing and impressively drawn background that just adds a great deal of depth to each of the individual crime stories being told.

In Blood Stream there is a really good mix of continuing the main character arcs and giving us a self contained mystery – the vagaries of social media are put under the spotlight and it’s really quite scary stuff in places. There are some edge of the seat moments, intuitively written to give maximum effect, this really is crime fiction at its very best. Impressive.