So in my previous blog I talked about those well loved novels that are made into movies, either good or bad and I ended with two words. Jack Reacher. Now then, how many Reacher fans are there out there? Are you one? I am. I love those novels. I have followed Jack since his beginnings and a new Reacher novel is something to look forward to. I’ve often wondered over the years how well it would translate to screen – the stories do seem to be appropriate for a great action movie that also has a great plot – so I was pleased initially to hear that a movie was in fact going to be made. Who would play Reacher I wondered? My mind sifted through all those rugged actors, tall, well built, not so good looking or clean cut maybe but hey, Reacher is not supposed to be the handsomest of men. But going back the main thing about him, the one thing that is described over and over…the MAIN thing about how Reacher looks is his height. Yes? So please for the love of God, tell me why anyone, including the actor himself, would think that Tom Cruise would be a perfect fit. Sigh. Don’t get me wrong – I am not in fact a hater of Mr Cruise – his personal life and what some would call strange attitudes have no bearing on whether or not I enjoy his movies – and he’s actually a pretty good “action” hero – The Mission Impossible films are great fun. But he’s not now, nor will he ever be, an actor that can pull off Reacher. I had many online discussions about the possibility that Lee Child had just sold us readers out to the highest bidder, but you know thats probably not it. How much control can an author realistically keep over his character once he gives the rights to any movie studio? I find this a difficult one. I have no evidence that the Cruise controversy has affected Mr Child’s  readership – certainly I would not allow my annoyance at that to stop me enjoying future novels. I think its an interesting discussion. Some research tells me there ARE ways for an author to have some say over what happens to their characters in the visual medium, but many it seems choose to just go down the easy road. And thats fine. After all they own the characters and stories they create don’t they? How much do they REALLY owe their loyal readers. Writing may be an art form and a calling but its also a job. And when you are working who doesnt go for the highest paycheck possible? 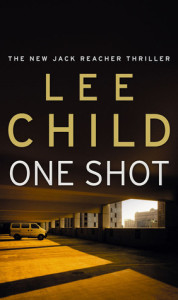 So how was the movie? I watched it. My inner voice that said it couldnt be THAT bad compelled me to see just how bad it was. To be fair it wasnt bad. It was pretty good as action movies go. Once I allowed myself to let go of the image of Reacher I had in my head I enjoyed it – as an action movie. Mr Cruise did his best. He captured to my mind the SPIRIT of Reacher in some senses. Still, the problem I had was that the wonderful actor Jai Courtney was playing the bad guy. And frankly he was MUCH closer to the image of Reacher I had in my head – so confusion reigned for a lot of the time. Standing at over 6 feet tall he is perhaps a little too clean cut for Reacher but if he had been given the role I would not have been nearly so dismayed! In some scenes, towering over Mr Cruise, it was difficult to remember that no, he’s not the good guy.  Anyway. I had a lot of fun with the film so it wasnt all bad news and if you are a fan of the novels this probably won’t distress you too much. After all, its not REALLY Jack Reacher its just a great action popcorn movie.

So. There are my thoughts on that particular adaptation. I would be interested to hear which adaptations you have been dismayed about…have you ever felt let down by a film version of a much loved book? The thing I most want to know is…which character has been destroyed for you by a particularly strange or insane piece of casting? Because in this readers opinion – casting is key when you are trying to bring a much loved novel to the screen.

Thats it for now folks! In part 3 I will be talking all things Potter. Yes Victoria, I’m going to ask you to contribute. https://victorialovesbooks.wordpress.com/ Your knowledge in this area far outweighs my own.

One Response to Books…..and then come the Movies. Part Two.