Broad Knowledge: 35 women up to no good. Guest post from Joanne Merriam. 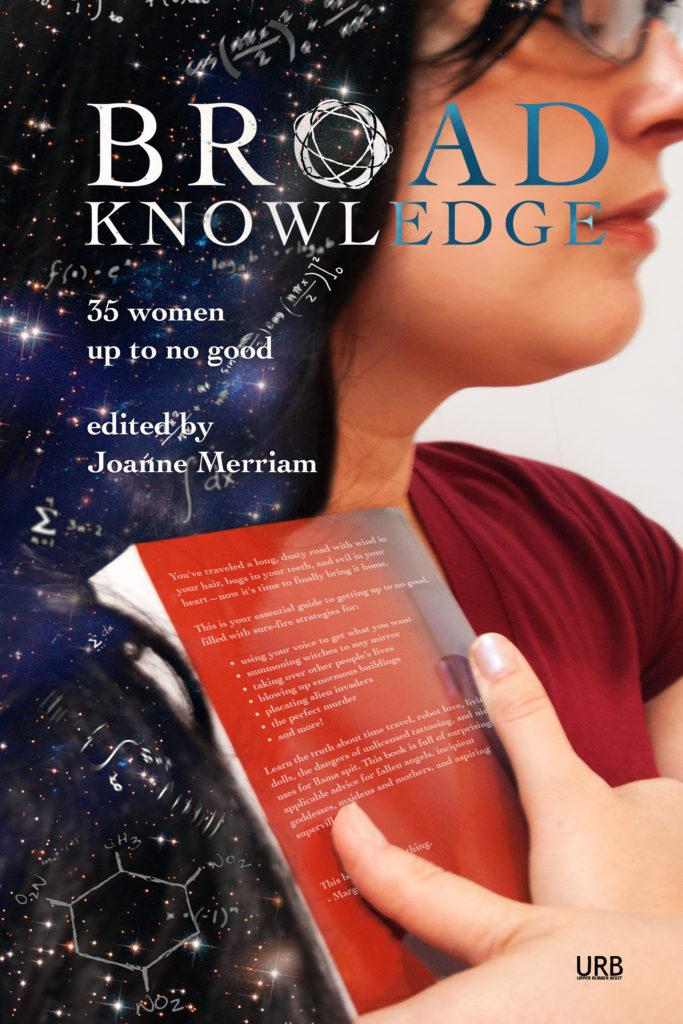 My journey into publishing started with a job listing in the local paper for an administrative assistant position at the Writers’ Federation of Nova Scotia, where I ended up working for five years in the ’90s. I was the office manager, and the volunteer coordinator, and the receptionist, and, well, I basically did everything the Executive Director didn’t do. One of my many tasks was answering questions from the public about how publishing worked, and in the examples I gave, I didn’t want to use the name of a real publishing company and cause any confusion or accidentally defame somebody, so I made up a publishing company which I called Upper Rubber Boot Books, after the Nova Scotian expression for a marginal and probably uncool place (Canadians often name places Upper and Lower Whatever, in reference to a more populous place, so if there were a town named Rubber Boot, then Upper Rubber Boot would be even more remote, you see). If I were American, perhaps I’d have called it Podunk Press. And so, when I decided to start my own company, I continued using the name as a sort of inside joke with myself.

URB has been around now since 2011, and our titles include the dark feminist fiction anthology Choose Wisely: 35 Women Up To No Good, the adventure sci-fi anthology The Museum of All Things Awesome and that Go Boom, and the poetry chapbook series Floodgate, which is on its fourth volume. We founded Small Press Week, which is the week of American Thanksgiving (look for #spweek18 when the time comes!), and we co-founded the monthly #SolarpunkChat with Reckoning Press, to promote more discussion of, respectively, small press books and hopeful environmental speculative fiction.

Now we’re turning Choose Wisely into a series, with the release of Broad Knowledge: 35 Women Up To No Good towards the end of 2018, and Sharp & Sugar Tooth: Women Up To No Good at the beginning of 2019. Broad Knowledge revolves around what women know, and Sharp & Sugar Tooth around what they eat (or how they are, themselves, eaten). Some of the stories I’m most excited about are Betsy Aoki’s nail-biting “And When We Die They Will Consume Us,” in which astronauts are consumed by self-aware alien biomes, D.A. Xiaolin Spires’ haunting “Bristling Skim,” in which a girl time travels to WWII by drinking leftover food rations, and Premee Mohamed’s eerie “Below the Kirk, Below the Hill,” in which a drowned girl becomes a member of an uneasy island community.

Crowd-funding has made the press―and many of our books―possible. I simply couldn’t run it without a mechanism for turning pre-orders into up-front funds to pay my writers. Our Apocalypse Now: Poems and Prose for the End of Days was paid for through Kickstarter, as was our immigrant science fiction anthology How to Live on Other Planets, and our Sunvault: Stories of Solarpunk and Eco-Speculation. Now we’re crowd-funding the Women Up To No Good series, to pay our writers professional rates, get the series on a more self-sustaining footing, and make pre-orders (and some other rewards, including customized book covers) available to our wonderful readers. I hope you’ll check it out! Link: