Created – The Destroyer. One Epic Series. 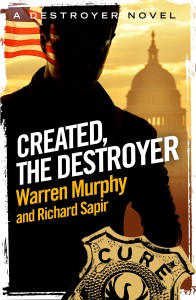 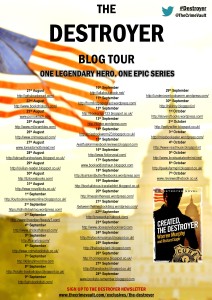 So a bit of a trip back in time here – very pleased to be part of the Blog Tour for Created the Destroyer, a literary reboot.

When ex-New Jersey cop Remo Williams is electrocuted for the murder of a dope-dealing goon, CURE, a super-secret government agency that doesn’t really exist, schemes to resurrect Remo as the ultimate killing machine that will carry out most of its dirty plans. Under the direction of expert assassin Master Chiun, Remo is transformed into the Destroyer and launches a series of secret plots to dissolve the underworld.

In 1985 the series was made into a movie: Remo – The adventure begins. And now Sony Pictures has signed up IRON MAN 3 director Shane Black to direct THE DESTROYER, a Hollywood film inspired by this legendary thriller series. Exciting!

So, a confession – I LOVED the now admittedly rather cheesy 1985 movie Remo, it was one of my favourites back in the day. Yes judge me all you like but I was unaware that there was actually a series of books attached to that – so when I was asked to take part in this blog tour I was intrigued to say the least.

So I dived into “Created: The Destroyer” and what I found was a short but sweet and HIGHLY entertaining read that had a marvellous mix of thrills, spills and ironic humour. It was actually terrific to live for a while in a world without mobile phones, instant communication on the net and get back to some basics – Starting off with Remo awaiting death, the opening will immediately draw you in and make you want to keep reading.

As the story progressed, I found it to actually be quite different to the movie, although the heart of it was there. The character progression for Remo was fascinating, more emotionally resonant at first he soon becomes quite dark as his whole world changes – and this first instalment sets up a world that you will definitely want to return to.

The only small problem is that a lot of action is packed into a short amount of time so occasionally you feel that you lose the characters a little – however that does not detract from the pure enjoyment this read will give you, and as it is a series there is plenty of time for more depth to develop.

Overall a terrific little read, it won’t take you long and the best thing I can say about it is that it really is true escapism.  Curl up with your tipple of choice and perhaps some chocolate (or in my case LOTS of chocolate) and enjoy!

To find out more: http://www.thecrimevault.com/exclusives/the-destroyer/