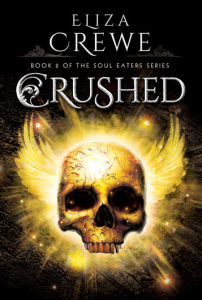 I am very pleased to welcome Eliza Crewe to the blog today – I have not yet had a chance to read her novels, but I am very much looking forward to them and her story is interesting – originally with a publisher until they closed their doors, she had embarked on a mission to self publish, most especially for her readers who having read Book One were REALLY keen to read the follow up…

Eliza Crewe: The Path to Self-Publishing

I never planned to self-publish. I’d planned to go about publishing the tried-and-true route–get an agent, then a publishing deal, maybe sell a few international rights, publish the sequels, etc. Plod down the straight and narrow.

Instead my publishing path has been as warped as the morals of my people-eating monster MC.

The Plan: Get an Agent

I queried agents (a lot of agents) and bombed spectacularly. Every single agent rejected me, most (if not all–I blocked the memory) sent a form rejection. It wasn’t going so well.

Then, just by chance, a stranger in India read a version Cracked I posted to an online critique forum. He liked it, and is friends with an editor at Penguin’s Indian branch, so he forwarded it on to her. She emailed shortly thereafter and offered for Cracked’s Indian rights.

The Plan: Find a domestic publisher

The Reality: Find an agent

Months before anything happened with India, I had participated in an online competition called The Baker’s Dozen at Miss Snark’s First Victim’s blog. The Baker’s Dozen is a competition where agents bid to read pages on entries that they’re interested in (it happens every year, and is just about to start–so go check it out!). It doesn’t mean the winning agent will sign you, just that they’ll read a certain number of pages and consider the possibility. The agent who won my entry, Victoria Marini, was sort-of-maybe interested. She asked to see revisions, and I was waiting to see what she thought of those when India offered. Fortunately, the India offer tipped her over the edge, and she took me on.

Since I already had an international deal, the next step was to find a domestic publisher. I was in an odd position in that Penguin India wanted to publish Cracked fast, as in, 6-months fast, (for comparison, most US publishers take at least two years to publish). PI was launching their first YA-only imprint in the spring and wanted Cracked to be an inaugural title. As a result, we needed to sell Cracked fast, preferably to a publisher with a short turn-around, so I wouldn’t be releasing book 3 in India before book 1 was ever released in the US.

Fortunately we were able to sell the rest of Cracked’s rights to Strange Chemistry, the YA imprint of Sci-fi/Fantasy publisher Angry Robot, and they agreed to release it shortly after Penguin India.

The Plan: Smooth sailing–Fulfill my contract by traditionally publishing my series

The Reality: Up the creek without a paddle–Strange Chemistry folded

We signed in September of 2012 with Penguin, then October with Strange Chemistry. Cracked was released in India in April, then in November in the rest of the world. I turned in my drafts of the sequel, Crushed, and everything was going along swimmingly.

I got the news that Strange Chemistry was closing their doors and Crushed wasn’t going to be released after all. I was left six weeks before the release with no publisher, and no rights to my own books. We had a reversion clause in the contract of course, but it didn’t cover every contingency (and took time to kick in), so things were really up in the air. We were told that I would at least get the rights to Crushed back, but the person who told us that no longer worked for the publisher, and we had nothing formal. And, even if I had the rights back to Crushed, I didn’t know if Angry Robot would keep selling Cracked. I could be publishing a sequel to a book that, for all intents and purposes, no longer existed. No answers were forthcoming, so we just had to…wait. Wait and see whether Crushed would ever see the light of day.

Finally, about two months after Strange Chemistry closed, and six weeks-ish after Crushed was supposed to be released, the reversions appeared in my inbox. I’m pretty sure I squealed.

Since my fans had already been waiting forever (and because I was paranoid something else would go wrong!), I gave myself three weeks to figure out the self-publishing game and get this bad boy out there.

There is certainly a learning curve to self-publishing. There are all different platforms, all different formats you need to use, different royalty rates and different requirements for different distributers. I’m still figuring it out, but fortunately, there are a lot of awesome people out there who have already done it and are willing to share their experiences. The writing community is full of awesome folks.

The Plan: Write books , Live Happily Ever After

So far, my publishing story has been more of an adventure tale than a non-fiction anecdote, but that’s okay. Adventures have always been my favorite.