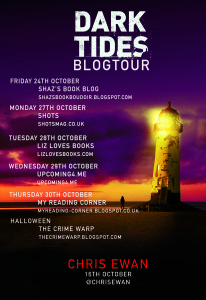 Today, as part of the blog tour for Dark Tides, I’m pleased to welcome author Chris Ewan to the blog, talking about writing from a female perspective.

Over to Mr Ewan….

Writing From a Female Perspective

What do I know – and I mean really know – that I’m in a position to feel absolutely confident writing about? I used to be a lawyer, which you might think would come in handy for a crime writer, except I wasn’t a criminal lawyer, and there’s not much call for novels about film law or pensions administration. I can drive a car as well as the next person, but I’ve never been in a high speed chase or attempted to tail someone without being spotted. I’ve got angry from time to time, even rageful on occasion, but I’ve never lashed out at anyone, let alone killed somebody. I’m average. I’m ordinary. Most writers are. But I don’t want to write about the average or the ordinary, and you don’t want to read about it, so I make stuff up.

I’ve written about burglars. I’ve written about assassins and hostage negotiators; about spies and police officers; about motorbike riders, plumbers, paraplegics, magicians and showgirls. I’ve never been any of those things. Never even tried out on a Vegas stage. And of course that doesn’t matter, because like you, I have this nifty special power known as imagination. I can put myself in other people’s shoes, just like we all do from time to time, and I can imagine what it would be like to be on the run from rogue British Intelligence agents, or searching for the answers to the unsolved murder of a loved one.

This fiction business is strange. You go along quite happily, inventing whole other worlds, completely made-up characters, and then suddenly you do something that seems to draw a little more attention to the act itself.

Like, for instance, writing as a male author from the perspective of a female character.

In Dark Tides, my new book, pretty much all of the novel is narrated in first person perspective by the character of Claire Cooper. (The only alternative material is some second person narration from the perspective of a killer). And that shouldn’t, I don’t think, be any more noteworthy than narrating a book by a male character, or by an alien, or a dragon.

And yet it is.

It is, for one thing, because it’s something people tend to notice or remark on. A couple of early reviews of Dark Tides have already made reference to this, in fact.

But it’s also something I was conscious of myself when I began work on the book. Early on, I knew the only way to get to the guts of the story I wanted to tell was to narrate Dark Tides from Claire’s perspective because she was at the heart of everything for me. And truthfully, that made me nervous. Hell, I’m always nervous when I begin a new book, but this was a subject my anxiety could latch right on to.

Why? A couple of reasons, I think.

First, how could I find Claire’s voice – which is always the hardest step for me – when I had no idea what it could feel like to be a teenage girl or a young woman, to have my mother go missing, to grow up alone with my dad, to be isolated from other girls my own age, to work as a female police officer among male colleagues?

And two, I felt like I was painting a target on myself if I handled the narration insensitively in some way, if I made a crass error, or if Claire didn’t come across as authentic or credible. It stands to reason that the hazards of these potential errors should apply to every character an author writes about, though somehow they seem, or perhaps just feel, amplified when a male author writes from a female point of view.

As an aside, I think it’s also true, though I don’t know why, that it’s much less remarked on when female writers narrate novels from the perspective of male characters. Perhaps they just do a better job.

In any case, the point is that in writing Dark Tides, it became something I was very conscious of.

So what did I do differently? Not a great deal. I guess my confidence got dented a few more times than it ordinarily might. I think perhaps I provided fewer physical descriptions of Claire or her body than I’ve done in the past when I’ve written from the perspective of male characters. Other than that, I did what I always do. I tried to empathise with the character I’d created, to understand the emotions Claire was experiencing at a given moment, to get a solid grip on her motivations. And then I ran with it.

Did I do a good job? That’s impossible for me to say. But one thing I can tell you is that I think Claire is the most complex, most rounded character I’ve ever created. I miss writing about her and from her perspective. And I very much hope you might enjoy making her acquaintance.

When Claire Cooper was eight years old her mother mysteriously vanished during Hop-tu-naa, the Manx Halloween. At fourteen, Claire is still struggling to come to terms with her disappearance when she’s befriended by a group of five teenagers who mark every Hop-tu-naa by performing dares. But Claire’s arrival begins to alter the group’s dynamic until one year a prank goes terribly wrong, changing all their futures and tearing the friends apart.

I’ve been a fan of Mr Ewan’s thrillers since Safe House – particularly because he always brings something different to the table with each new novel so you know you are in for a treat (or a trick?) every time, you are just not sure what kind of treat it might be..

In the case of “Dark Tides” the treat was this – one of my favourite types of story (past events invading current happenings) done with this authors particular style, using some terrifically drawn characters facing some terrifying circumstances, all wrapped up in an often scary package – perfect Halloween reading.

Pretty perfectly constructed, we go between past and present to paint a picture of the things that have shaped Claire Cooper – losing her Mother at a young age, growing up fairly insular and isolated but finally finding some really good friends. Sometimes however, friendship can be harmful and this group of eclectic and impulsive characters may not be the best thing for Claire. As events spiral out of control and she faces down a killer, it is compelling stuff and you will be hooked.

I VERY much enjoyed finding out more about the Manx version of Halloween, with all its similarites yet with a deep and imaginative mythology that lent itself brilliantly to the tale being told, giving a perfect backdrop to the often creepy and haunting events. Each of the characters has a heart and a voice all their own, Claire is especially likeable even as she does some rather idiotic things. There are not TOO many male authors who can pull off such an authentic female voice but Chris Ewan is one of them, she is someone you will want to follow along with and will root for all the way.

The mystery element is also intelligently done – ok, so the author did not manage to “trick” me but there were some fascinating insights into a heart full of darkness and an exellent flow to the proceedings, one of those books that keeps you up in the night and leaves you bleary eyed the next morning. I loved it – my favourite so far without a doubt and most definitely Highly Recommended.