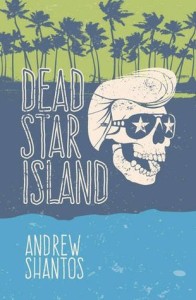 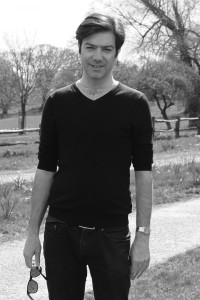 Today I am very happy to welcome Andrew Shantos to the blog – telling us about the “why” when it came to his idea to write Dead Star Island.

Dead Star Island: the psychology of an idea

Andrew Shantos on not how, but why, he had the idea for his book.

I remember very well from a young age my dearest hope. An impossible dream, my first (and very innocent I should add) fantasy.

I already played in a football team from the age of eight, and I used to dream about me and my friends – eleven or twelve of us – living together in an articulated lorry. A luxurious lorry, with arcade machines, table football and a snooker table; and each of us had a single bed with a Brighton and Hove Albion Football Club duvet (or whatever club each person wanted; it was a very tolerant fantasy). We’d travel round the country, stopping at various places, playing football matches (against Manchester United, Liverpool, Arsenal or whoever), then back on the luxury lorry to have dinner and play computer games.

It was a simple, innocent dream, perhaps born of a rather solitary disposition, of someone who always found himself in with the out-crowd and wanted to be part of a select gang.

There’s something really quite compelling about exclusive clubs. You often find them in books. Take Donna Tartt’s The Secret History: millions of readers (including me) were bewitched, gripped by the desire to join an intimate group of students and find out their secrets. Or Enid Blyton’s The Famous Five, or her Secret Seven. We read on because we want to be one of them, find ourselves becoming one of them.

As I got into my teens, football morphed into music. But the dream followed the same pattern. Now the lorry was simply my bedroom, my private refuge, which I shared with my heroes. A life-size poster of Jim Morrison gazed, Christ-like, from my bedroom wall. On the opposite side was Jimi Hendrix, looking cool and stoned and just really pleased to be there. I would play computer games late into the night while listening to The Stones, Elvis, Marc Bolan – someone young, beautiful, and almost always dead, martyred to rock and roll.

In my twenties I lost my way. I joined a real gang, an actual top-secret elite. I found myself part of a religious cult. (I really did by the way, I’m not making this up!) I don’t really know how it happened. But I think I know why.

Partly it was spiritual quest: being a seeker, as so many are in their lost and confused early twenties, fresh out of university, trying to make meaning of the world. Partly it was finding something else to tell me what to do, after sixteen years of passive comfort, each day directed by parents and teachers.

But above all, this cult (a rather nice one actually, nothing too nasty, only a very gentle forty degree brainwash) allowed me to become part of an exclusive club. It was another iteration of the fantasy. Quite a full-on iteration admittedly. I’m glad I saw through it, lightened up and started having fun again.

All this time – before, even, that early age when in my mind I was living in a lorry – above all things I loved books. Even more than the heroes on my bedroom wall. I knew I wanted to write a book, or two, or more. And now, having written Dead Star Island, and at the time having just had an idea and writing it, now I’ve been thinking quite deeply about the idea behind it. And not on how I had the idea, but rather why I had the idea.

I’m very much with Stephen King, who describes writing a novel as akin to excavating a fossil: uncovering it little by little, until it is fully exposed, and you lovingly restore it to its full glory. But it was always there to begin with, or, at least, formed over many, many years.

What I did in my book was create yet another exclusive club (unwittingly, there was nothing in my conscious mind that brought this about). I restored the heroes from my bedroom walls, and from my record deck, back to life. Not just some of them. All of them. Together, living on a secret tropical island. Not dead at all, but very much alive, having staged their deaths to come here.

But regardless of this concept, and how it forms the background for a detective novel, I see now there was an irresistible compulsion for doing this, one single reason my mind created this top secret gang.

It was so I could go there. So I could be on the island, live with them and be part of it.

Elvis is there, so are Jimi, Marilyn and others. They’ve all lived for decades in luxurious, isolated anonymity. But someone is murdering them one by one in bizarre reconstructions of the deaths they staged to leave the real world.

Christian Adhis, the island’s mysterious Director, is worried. Brian and John have been murdered in copycat killings, and that’s bad for business. The remaining residents are living in fear, and demanding the killer is caught before he strikes again. So Christian calls in his old school friend Mario Gunzabo.

Dead Star Island, published by APP, can be ordered through Amazon priced £4.99 for Kindle and £8.99 paperback: http://www.amazon.co.uk/Dead-Star-Island-Andrew-Shantos/dp/0992811627

To get in touch visit him here….