Today I am very happy to have been able to ask David Barbaree a few questions about his brilliant historical fiction novel Deposed as part of the blog tour – Deposed will be reviewed here very soon. Thanks so much to him for taking the time.

Thank you for answering some questions for me on the really very excellent “Deposed” – firstly tell us a little about what inspired you to write around this time period – Is it one in history that particularly fascinates you?

Hi Liz! Thanks for having me.

I’ve always been interested in Roman history. Prior to starting the book, I was probably more interested in the fall of the Republic and the later Byzantine period. I used to think the early Imperial period, the period in which Deposed takes place, was just a parade of emperors behaving badly. This changed when I started my research for Deposed. I wanted to tell the story of a deposed tyrant seeking his revenge. I went on the hunt for the right tyrant and eventually settled on Nero. He was the perfect choice because of the False Neros, men who claimed to be Nero after he fell from power. This provided the sense of uncertainty surrounding Nero’s death that I needed to tell the story I wanted to. As I researched the period, I discovered it was far more complex and interesting than I’d originally given it credit for.

So it is, I believe, a fictional story based on certain factual elements – so I’m interested to hear about any research and how much of it is based on actual events, how you kept it authentic.

I wanted to fit my story of a deposed tyrant into the known historical record. The aim was to have a story that wasn’t true, but a story that could be true. This was another reason why I chose the time period I did. The historical record for Vespasian’s reign is particularly spotty. This gave me a lot of room to manoeuvre as a novelist. But I otherwise tried to make the book historically accurate. I spent a lot of time researching the period – the food, the clothing, the layout of the city, etc. – and I did my best to make it an accurate, interesting recreation of Ancient Rome. However, there are some inaccuracies in the book – I think it is impossible to avoid them when writing historical fiction. Often these were done to serve a particular narrative purpose and, when possible, I tried to imbed an explanation into the text. But if any explanation slowed down the story or seemed forced, I cut it. I thought it more important to have a compelling narrative rather than a clunky justification to the reader.

You use multiple points of view to tell the story across different time periods – as a writer do you tend to plan every detail in advance or are you one who goes with the flow and fixes it later?

I’ve always loved books told from multiple perspectives (like the A Song of Fire and Ice series), particularly those in the first person (such as My Name is Red and As I Lay Dying). But I ended up with this format for my book in a roundabout way. When I first sat down to write Deposed, I tried writing in the third person and it was terrible. I kept at it but never really improved. When I finally switched to the first person the words and characters came much easier. The first person perspective worked, but one point of view wasn’t enough – not to tell the story I wanted to. It was too limited in scope. So I settled on multiple first person narrators. I thought this would be an effective way to build a different world and a unique way to approach the genre.

As for the narrative itself, I had a sense of where the plot was going – the big events were already decided for me. But otherwise it was a trial and error process, slowly figuring out what worked and what didn’t. I would plan in advance as much as I could, but I found the story and characters would sometimes take me in a different direction.

I’m reluctant to give too much away, not only for spoilers but I’m still working on book two and things could change. But the demise and rise of emperors will stick to the historical record. And Marcus and Nero have unfinished business that will take them east in book two.

Finally, a question I always ask, is there anything you have read this year that you would like to recommend to others?

I’ve recently started following you on Twitter and I’m quite certain your readers will find me woefully behind the times on what to read. I just finished Conclave by Robert Harris and would definitely recommend it. It was a lesson on how to construct a thriller and eliminate any unnecessary narrative baggage. On the non-fiction front, the last great book I read was Dynasty by Tom Holland, which would provide a nice lead into my book as Deposed essentially picks up where Dynasty ends.

Thank you again for having me!

In a darkened cell, a brutally deposed dictator lies crippled – deprived of his power, his freedom – and his eyes.

On the edge of utter despair, his only companion is the young boy who brings him his meagre rations, a mere child who fears his own shadow. But to one who has held and lost the highest power, one thing alone is crystal clear: even emperors were mere children once.

Ten years later, the new ruler’s son watches uneasily over his father’s empire. Wherever he looks rebellion is festering, and those closest to him have turned traitor once before.

To this city in crisis comes a hugely wealthy senator from the very edge of the empire, a young and angry ward at his heels. He is witty but inscrutable, generous with his time and money to a leader in desperate need of a friend – and he wears a bandage over his blinded eyes.

The fallen emperor’s name is Nero.

But this isn’t his story. 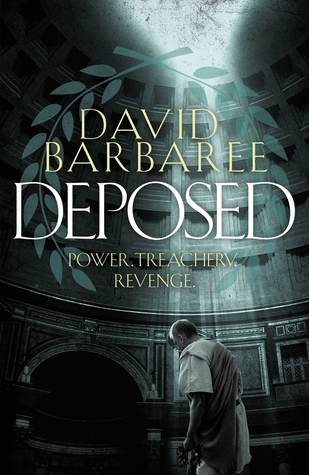