When Kenny’s cousin, Ian, comes to the aid of a fellow ex-squaddie in a heap of trouble, he gets caught up in the vicious underground fight scene, where callous criminals prey on the vulnerable, damaged and homeless. With Ian in too deep to escape, Kenny has no option other than to infiltrate the gang for the sake of his family. Kenny is an experienced MMA fighter, as tough as they come, but has he found himself in the one fight he can never win?

Loved Dog Fight – gritty, realistic and with a sharp edge of gulp, Michael J Malone takes us and his series character Kenny into the dark underbelly of underground fighting. It is visceral and visual, you’ll feel every punch. So to speak.

Its the perfect mix of thrills and character moments, I’m a bit of a fan of Kenny – in fact any of you who like the bad boys, Dog Fight is chocka block full of them, it is a real rollercoaster of a read with some really cool descriptive prose and a hell of a lot of oomph.

Michael Malone brings a lot of emotional themes into his narrative too, its not all about the adrenalin moments and I have to give him huge points for managing to write a non annoying child character. The feeling underneath it all is cleverly portrayed, especially in relation to PTSD  – you want to growl at those evil doers who take advantage of the vulnerable, the whole story just pops off the page and drags you right in.

Dog Fight is fast, gripping, decisively authentic and a real proper page turner. Anyone wanting to just get their read on should pick up this novel and dive right in. 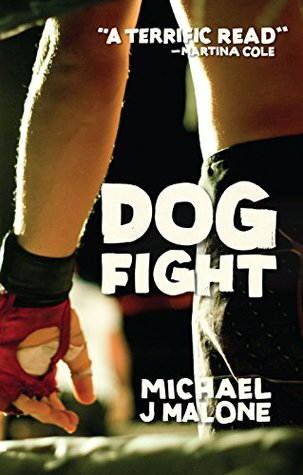