Echo Boy by Matt Haig. A Book is a Map… 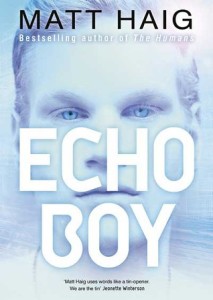 I made a wish upon a star and it was granted via netgalley….

Audrey’s father taught her that to stay human in the modern world, she had to build a moat around herself; a moat of books and music, philosophy and dreams. A moat that makes Audrey different from the echoes: sophisticated, emotionless machines, built to resemble humans and to work for human masters. Daniel is an echo – but he’s not like the others. He feels a connection with Audrey; a feeling Daniel knows he was never designed to have, and cannot explain. And when Audrey is placed in terrible danger, he’s determined to save her. The Echo Boy is a powerful story about love, loss and what makes us truly human.

Well, here we are. The funny thing is, I was dreading and anticipating this one in equal measure. Its Matt Haig, author of “The Humans”, THAT book. So I was equal parts faith and panic before I started reading. The faithful side of my reading soul told me that whatever market it was aimed at Mr Haig would be incapable of writing a book that I didnt get absorbed into. The PANIC button in my brain kept saying “What if you don’t like it. How could you say. You couldnt say. You would have to leave the country. Heck you would have to leave the PLANET” Yes ok I’m a little weird. Its just the way I am. All the best people are you know…

Anyway as I am still here on planet Earth and not writing this review from Mars I think its safe to say that the faithful part of my soul was satisfied..and I’ll tell you a little bit about why. In two sections if you like. The first part being straight up review and the second part being me and mine.

Echo Boy tells the story of Audrey and Daniel – one a Human teenage girl and one an Echo – an artificial lifeform built for service – but Daniel is unique amongst Echo’s and when Audrey’s life falls apart, redemption may come from an unexpected place.

There are many themes woven seamlessly into the narrative – love, loss, the pursuit of power, the ethical arguments on scientific breakthroughs and what they can be used for, all wrapped up in a story about life. What it means to BE alive.

For Young Adult readers it has some familiar twists – Boy Meets Girl but heck it aint easy, a future world that is harsh yet recognizable, the bad guys, the good guys, and a classic battle to survive in an untenable environment. So as far as that goes you can tick all the boxes and say, yep, young readers are going to love this one. They have protagonists they can root for, a book adventure to be had, an easy flowing narrative that keeps you involved and both some emotional moments and some full on action..Everyone is happy. Not everyone will love it of course. I’m sure that there will be more “picky” reviews than mine popping up but I would have no hesitation in recommending it as a top notch example of Young Adult fiction that Adults can also get their teeth into. And that would usually be that. But this is me reading and Matt Haig writing soooooooo….

Lets talk about me. Its one of my favourite subjects.  I bring a little bit of me to each of my reviews I hope and in this case its more important than ever that I do so. For me more than for anyone else. So bear with me…

Like Stephen King, Matt Haig is one of my absolute Idols when it comes to the written word, hence the Panic button and the faith and all those things that happened prior to me staying up until 3.30 am this morning reading this on and off, and getting up at stupid o’ clock on a Saturday morning to finish it. I knew without actually thinking about it that there would be something in there to feed my soul. I think every reader has a writer that does that for them. I have two. Oh lucky me. Truly.

This book is not The Humans. That kind of thing probably only happens once in a lifetime and I’ve had mine – but still, in a lot of ways it IS. About humanity anyway…and for that reason this one will also stay with me, just in different ways.

Every so often, in amongst the story and the action and the compelling fascinating tale, one character would think or say something that just spoke to the very living heart of me. Things that are FELT but not vocalised because they are hard to put into words. Mr Haig can do it though. Oh boy can he. And I now have a few more quotes added to my life rules that I took from “The Humans” that will help me in the darker moments that still plague me. To remember that to feel is to be alive. And to be alive is one of the most amazing gifts we have.

So thank you Matt Haig.

Killing me softly with his words. Again.