For the Most Beautiful Blog Tour – Emily Hauser – “Why we Write” 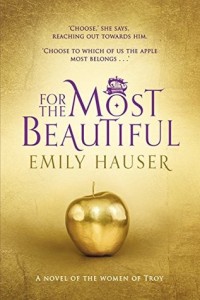 Very happy to take part in this blog tour today for a beautiful looking (and sounding) book, for my stop I asked if the author would contribute to my ongoing “Why We Write” feature. She has written me a lovely piece and I hope you enjoy it.

Why We Write – Emily Hauser

One of the main reasons why I write is a very specific one: to get people excited about the classical world. I’m passionate about the ancient Greek and Roman past – I’m a scholar and researcher of Classics and have been studying it for over fifteen years – and I love using my expertise on the people and places of antiquity to bring them alive to modern readers. For me, fiction is one of the greatest tools available to us for bringing the myths and legends of ancient Greece and Rome alive, and so to connect to the real, living people of the past. Fiction allows us to re-imagine and rebuild the ruined walls of Troy, but most of all, to put the people back into it – to imagine their hopes and fears, their dreams, the people they loved, the journeys they made. That, for me, is the peculiar magic of writing about the past: it is possible through fiction both to bring history alive, and, at the same time, to remind us that we are not, in the end, that different from people who lived thousands of years ago.

Which brings me to the second reason I write: to put women back into the picture of history. So often – and I could name any period, from ancient Greece to medieval France to revolutionary America – women have been lost from the historical record: both because they were not deemed worthy of mention, and because they themselves, often kept illiterate and uneducated, were unable to write, and so to record their thoughts and experiences. As a researcher into the lives of women in ancient Greece and Rome, I want to bring the female experience to the fore. I want to show that historical women’s experiences and women’s lives are just as important as those of the men whose stories have come down to us. In the case of For the Most Beautiful, that meant recovering the tales of two captive women during the Trojan War – Briseis, princess of Pedasus, and Krisayis, daughter of the Trojan High Priest – and telling their side of the story, with all its passion and destructiveness, revenge, love, and betrayal; stories just as powerful and worth telling as that of the rage of Achilles. One of the most rewarding things about this endeavour has been discovering just how vibrant and rich these women’s stories are, and how much there is to tell when you see the world through their eyes.

And finally, which I think might be one of the most common reasons for writing (but no less important for it) – I write simply to give readers that joy of picking up a book and losing themselves in another world, which I myself love to do. To provide another story, another time, through which to think about the things that most concern us: whether they’re love or war, grief, friendship, or death. It’s my belief that stories – and what else are myths and legends but stories? – are one of the most powerful road-maps towards understanding ourselves.

And if that’s not a good reason to write, I don’t know what is.

Three thousand years ago a war took place that gave birth to legends – to Achilles, the greatest of the Greeks, and Hector, prince of Troy. It was a war that shook the very foundations of the world. But what if there was more to this epic conflict? What if there was another, hidden tale of the Trojan War?

Now is the time for the women of Troy to tell their story.

Thrillingly imagined and startlingly original, For the Most Beautiful reveals the true story of true for the first time. The story of Krisayis, daughter of the Trojans’ High Priest, and of Briseis, princess of Pedasus, who fight to determine the fate of a city and its people in this ancient time of mischievous gods and mythic heroes.

In this novel full of passion and revenge, loyalty and betrayal, bravery and sacrifice, Emily Hauser breathes exhilarating new life into one of the greatest legends of all – in a tale that has waited millennia to be told.

You can find out more about Emily  HERE

More information and reviews if you follow the tour: