Half A World Away – Getting to Know You with Sue Haasler 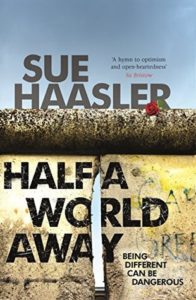 Today I am very happy to get to know more about Sue Haasler as part of the “Half  A World Away” blog tour. Details on the novel follow…

Tell us a little about your current novel, what readers can expect from it..
Half A World Away is set in East Berlin in 1987, two years before the Berlin Wall came down. In a country where being different can get you into trouble, musician Alex falls in love with a girl from an “unfriendly regime” (England). He also attracts the obsessive attention of Detlef, who is a lonely, repressed character with some very dangerous  connections. Alex is forced to realise that his country isn’t as benign as he thought it was.
Where did you grow up and what was family life like?
I grew up in County Durham, with my parents and younger sister. It was a very happy, normal childhood, although we did all have a tendency to break into song and everyone else would join in, like the Von Trapp family only not dressed in curtains. It was usually my dad who started it.
Academic or creative at school?
Mainly academic, in the sense that I did well in exams and that sort of thing. We were streamed into subject areas in secondary school and I was in the science group. I especially liked Biology, though I was quite squeamish. I studied English Literature at university though, because I’d gone over to the arty side by then.
First job you *really* wanted to do?
I honestly don’t know. Maybe I always wanted to be a writer. I spent a lot of time in my teenage years filling hundreds of tiny, spiral-bound notebooks with stories. They mainly featured real-life pop stars and footballers – what today would be called fanfic. At some point I tore them all up and tried to flush them down the toilet because I got paranoid that people would read them! That went as well as the scene in Billy Liar where Billy tries to flush the calendars that he’s neglected to post.
Do you remember the moment you first wanted to write?
I remember the exact moment when I decided to write a novel. A friend rang me up at work (I was the coordinator of a disability charity) and said she was taking a year off to write a novel. As soon as I got off the phone, I opened a new document on the computer and started to write what turned into my first book, Two’s Company. I suppose the idea must have been in the back of my mind, but on that morning it just all poured out. I had several chapters done by lunchtime.
Who are your real life heroes?
My writing hero is Stephen King. I can get completely immersed in the worlds he creates and I feel like I know the characters. I also loved his book On Writing, which contains the best writing advice I’ve ever read. My non-writing heroes were Sir George Martin, who produced the Beatles’ music, and the glorious Victoria Wood. As both of them have sadly died, I have some space at my fantasy dinner party table and have recently borrowed my daughter’s hero – the orchestra conductor Marin Alsop, who is a really inspirational woman who passionately believes in the power of music to change lives, especially through her work with young people.
Funniest or most embarrassing situation you’ve found yourself in?
Like my grandma and my mum before me, I have very sparse eyebrows, which means I have a lot of colouring-in to do in the mornings. My grandma used to say she’d rather go out without her knickers than her eyebrows, and although I might not make that choice, it is an essential part of the daily routine. One day last year, I somehow forgot to do it. Unfortunately it happened to be the day I was interviewing Holby City’s Series Make-up Designer for my book Holby City: Behind the Screen. I don’t know if she noticed (I wear glasses and the frames hide my eyebrows a bit), but when I got home and realised I’d been sitting in a TV studio’s make-up department with no eyebrows I was mortified.
DIY expert or phone a friend?
My husband first, then a DIY expert if it’s something very specialised or he hasn’t got time to do it.
Sun worshipper or night owl?
I’m definitely not a sun worshipper! I was born in the autumn and I’m happiest when I can close the curtains at 4PM and when it’s time to wear big coats. I don’t mind cold, crisp, sunny days, but if it’s hot I get all irritable. I burn ridiculously easily, too.
A book that had you in tears.
Stephen King’s Doctor Sleep made me cry in places. The main character, Danny (the little boy from The Shining, all grown up), works in a hospice and he has the gift of helping to make people’s transition to death a little easier. Those moments made me cry.
A book that made you laugh out loud.
I love Count Arthur Strong. My sister is taking me to see his stage show in June as a belated birthday present. We saw him last year, and he’s hilarious – the kind of laughter where you honestly think you might die from laughing. His spoof showbiz memoir, Through It All I’ve Always Laughed, is the kind of book I wouldn’t dare read on the train because people would stare at me.
One piece of life advice you give everyone
If you have a big decision to make and you’re unsure which path to choose, toss a coin. The important thing isn’t the answer the coin gives you – it’s your gut reaction to the result the coin gives you. If you’re happy with the result, you have your answer. If you feel like tossing the coin again, or think “best of three,” then you know that wasn’t the result you wanted – and again you have your answer. I’m a big believer in following your instincts.

Thanks so much Sue!
About the Book:

Alex is a talented saxophonist, flirting with ‘Western’ jazz as well as girls. When he meets Nicky – a beautiful English girl visiting East Berlin as an au pair – she makes him feel that his dreams could become reality.

Detlev’s love for his country has always been enough for him, until Alex makes him feel things he never thought possible. But what use is his passion when its object doesn’t even know he exists?

As Alex meets a new group of musicians, he moves closer to influences considered subversive by a state that has eyes and ears everywhere – and Detlev’s unrequited feelings threaten to endanger them all.

Sue Haasler was born and brought up in Co. Durham and studied English Literature and Linguistics at
Liverpool University.
After graduating she moved to London and worked for three years as a residential social worker. Since
then, she has lived as an administrator for a disability charity, which recruits volunteer carers for disabled
adults.
Many of the volunteers are from abroad and this is how she met her husband, who is from the former East
Berlin.
Sue has written four books, True Colours, Time after Time, Two’s Company (all Orion paperbacks) and Better
Than the Real Thing. Two’s Company was optioned for film by Warner Bros.
She has been commissioned by the BBC to write an authorized tie-in to Holby City.
She is married with an adult daughter and lives in London.

Purchase Half A World Away 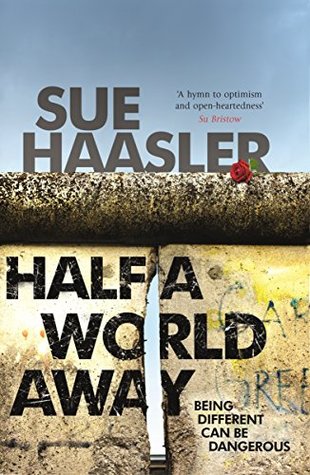