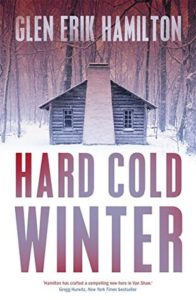 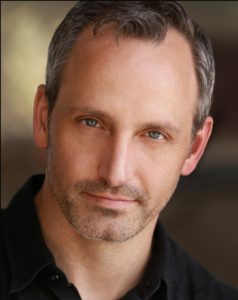 Today I am very happy to have Glen Erik Hamilton on the blog talking about Hard Cold Winter, my review will follow – these are great atmospheric thrillers that come recommended from me. Thanks to Glen for taking the time.

I loved Hard Cold Winter, it definitely solidified my love for Van Shaw – can you tell me a little about the origin of the character for you?

I always love reading about characters who are facing tough decisions. That can be at a crossroads in their life, or in a situation which challenges their personal beliefs. Having grown up consuming mystery and crime fiction, I was intrigued by the idea of a protagonist who was raised with a crook’s mindset. There were at least two ways to go with that: A young thief who is forced to acknowledge the moral cost of his life, or a solid citizen who had stepped away from the criminal life, who has to confront unfinished business. I cheated. I wove interstitial chapters into the main narrative of PAST CRIMES (and did the same for HARD COLD WINTER), to show Van at a young age. That allowed for the thrills and chills of his lawless apprenticeship under his grandfather, and the ethical minefield he’s walking today.

And for me “2nd book syndrome” is a thing – how did you approach the follow up in order to move the narrative forward – harder than the first or easier because you’ve got the basis to work from already?

The time pressure is certainly harder. You have as long as you like to finish your first novel, but once you’re on deadline, the work gets very focused very fast. But it is an advantage to have an established world, and a practiced voice for the lead character. The big thing, the thing I most wanted to get right, was for the second round to have an emotional wallop like the debut.

That’s tough to do, because you’ve shown some of your cards already. If the main character had a huge life-changing event, then that would have been at least referenced in the first book, assuming you were playing fair. So I went back to things mentioned in PAST CRIMES but not fully explored. In this case, that meant more about Van’s time serving overseas, and the psychological impact of combat.

The PTSD element is emotionally resonant – how do you speak to that within a thriller?

Van has spent his entire adult life in the military, most of it in the Army Rangers. He has had multiple deployments to Iraq and Afghanistan. He’s been wounded at least twice, and his body and face bear the scars of that. So does his mind. Van wrestled with PTSD in the past and largely conquered it, but stress is a snaky, evil thing, and symptoms can re-emerge.

I didn’t want that to be a casual thing, or something that I trotted out simply as Van’s version of kryptonite. For one, Van’s not a superhero. He’s a scrapper. For another, that would be insulting to veterans who struggle with the real thing. I did a lot of homework, reading and interviews, for HARD COLD WINTER, with the goal of getting it right. And for Van, the revival of old nightmares is a motivating factor. He empathizes with the victims. And maybe his subconscious is telling Van that there’s something wrong with the official story.

Seattle is almost (is in fact) a character in its own right. You know it well?

I used to know it very well, having grown up and spent my whole life in the area. I’ve lived in California for about a decade now, and now I have to work at keeping up with changes in Seattle. They seem to happen overnight. In fact, the rapidity of the social and economic upheavals was part of what spurred me to write about the city. During visits home, I would see new buildings, and even radically overhauled neighborhoods. That’s good in some ways, very tough in others. Seattle is becoming so expensive that locals, like Van, can’t always afford to live there, at least not how they might have settled in and raised families a generation ago. Being on the outside looking in, I see my hometown with different eyes now.

Can you tell us a little about what is next for you?

I’m hard at work on Book Three in the series, and have some ideas for a fourth adventure for Van as well. A standalone novel might be in my future. And I’ll go to the Edgar Awards for the first time at the end of April. No matter what the result, I feel like I’ve won already, so there will be some serious celebrating.

Thank you! It’s always great to talk to you!

When an old crony of Van Shaw’s late grandfather calls in a favor, he embarks on a journey deep into the remote forest of the Olympic Mountains in search of a missing girl tied to his own criminal past.

Discovering a brutal murder scene, Van finds himself caught between a billionaire businessman on the one side and vicious gangsters on the other.

In an attempt to survive Van will have to face some of the toughest questions of his life, not least over his relationship with his iron willed girlfriend, Luce. But with the clock ticking, a desperate Van may just need every ally he can get, especially as someone prepares to unleash a firestorm on Seattle that could burn them all to ashes.

This is the second Van Shaw novel – I love these, intelligent and atmospheric thrillers with enticing plots and some great characters, having been a fan of Past Crimes I was very pleased to see Van Shaw returning.

Hard Cold Winter is a fast paced, addictive read that leans towards some dark themes and has the benefit of being entirely engaging throughout – it has a gorgeous past/present vibe of the type that I love and a brilliant sense of place when it comes to Seattle so you get a real feel for everything going on.

Once again Glen Erik Hamilton connects his main protagonist to the ongoing events with a personal touch – in this case a girl from his past – Van is intriguing, flawed and kind of gets thrown into things rather than actively seeking them out which gives the books a deeper sense of reality.

The fact that our hero has a criminal background as well as being an ex army ranger really keeps things fascinating – in this case he is also struggling with PTSD whilst chasing after some very dangerous people. It is exciting (and emotive) and cleverly constructed to keep you turning those pages well into the night.

Overall another brilliant read from this author. Bring on book 3! 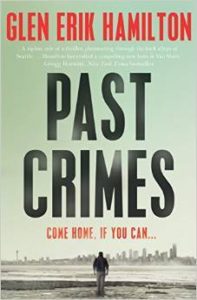