Girton Club-foot, apprentice to the land’s best assassin, still has much to learn about the art of taking lives. But their latest mission tasks him and his master with a far more difficult challenge: to save a life. Someone, or many someones, is trying to kill the heir to the throne, and it is up to Girton and his master to uncover the traitor and prevent the prince’s murder.

In a kingdom on the brink of civil war and a castle thick with lies Girton finds friends he never expected, responsibilities he never wanted, and a conspiracy that could destroy an entire land.

Age of Assassins is pure energy on the page – a banging brilliant fantasy novel in a year where there are a fair few banging fantasy novels coming out, this one stands out.

I couldn’t put this damn book down once I picked it up – Girton Club-Foot, apprentice assassin, does not allow for such a thing as he and his mentor hunt for an, erm assassin. In a cleverly developed and endlessly intriguing plot the pair of them sneak around in plain sight, trying to save the heir to the throne in a land that is on the edge of all sorts of disasters, meeting new friends and enemies along the way and basically dragging you, the reader, on an adventure of epic proportions.

I’m a lover of fantasy when it is so very brilliantly character driven, Girton is one of my favourite characters ever in this respect – he’s so beautifully grumpy, wonderfully witty and whilst I’ve seen others refer to him as disabled I never ever saw him that way because he didn’t. His boss and kindly (occasionally) mentor Merela is also hugely engaging and as a pair they were a delight to read about.

The world building is also beautifully done, understanding coming to you via plot developments and character dialogue for the most part rather than endlessly complicated description – another thing I love because you just absorb it along the way. The political landscape is clearly divisive, setting our main protagonists up for all sorts of ups and downs that you just live right along with them. The writing style is a bit rock and roll, Age of Assassins is a heady mix of mystery, thrills and pure classic fantasy, forget your Game of Thrones for a bit, pick up this instead.

There is so much to love in Age of Assassins, I’m not even going to spoil one second of it for you. Just go get it and throw yourself in there, its a rich, rollicking, rush of a read that will make your head spin. Bring on book 2. I stand ready. 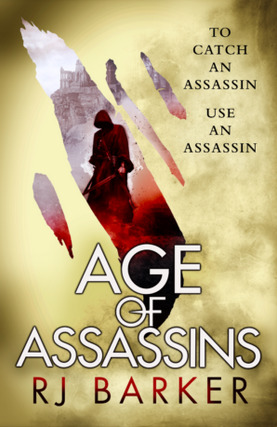