Latest Reads: Anything You Do Say Gillian McAllister 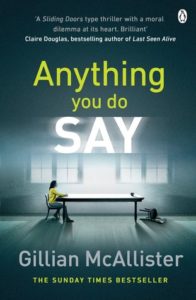 Joanna is an avoider. So far she has spent her adult life hiding bank statements and changing career aspirations weekly.

But then one night Joanna hears footsteps on the way home. Is she being followed? She is sure it’s him; the man from the bar who wouldn’t leave her alone. Hearing the steps speed up Joanna turns and pushes with all of her might, sending her pursuer tumbling down the steps and lying motionless on the floor.

Now Joanna has to do the thing she hates most – make a decision. Fight or flight? Truth or lie? Right or wrong.

What would you do?

A momentary, impulsive, split second decision and suddenly you have your life and that of another teetering on the edge of the next move you make…

“Anything You Do Say” is a dual narrative, incredibly thought provoking character drama, peppered with realistically flawed people and a moral dilemma at the heart of it that may keep you up at night. Gillian Mcallister pulls no punches with either of the possible outcomes, laying it out for the reader, paring back her characters personalities, decisions, defining moments and taking you down the rabbit hole with Jo into separating possible futures, neither of which necessarily grants absolution.

I do love a book that keeps you feeling edgy and unsure – as both possible realities play out and Jo in either one faces emotional and practical issues that would pressure the most sensible personality – you are waiting for that one defining moment that decides her fate but as in real life a lot of consequences are unpredictable. Jo’s husband was a character that I got randomly snarly about which again is something I love, I had a distinct urge to kick him in the shins in both scenario’s and Jo herself is not entirely likable but she is entirely real.

This novel is clever – just that – in the way it plays with your emotions and your moral judgments – the fact that nobody you meet here could be labelled “bad” but they are all very human with all the many layers that brings, the ending in both possibilities leaves you melancholy but thoughtful. Conceal. Reveal. What WOULD you do?

The world is not black and white.

Doing the wrong thing is not necessarily easy.

Fight or Flight. Right or Wrong. Make that choice…you only have moments…

An easy “Highly Recommended” tag from me. Entertaining, beautifully plotted, resonating – A moral question with no simple solution…

Purchase Anything You Do Say 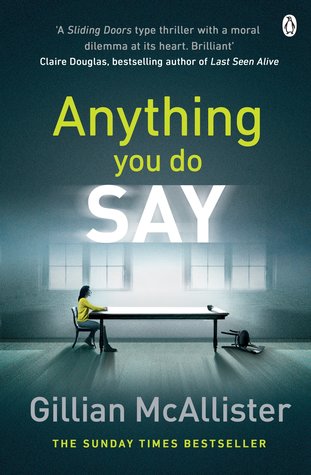