No-one is who you think they are

Until the day she arrives at her childhood home to find a house ringing with silence. Her mother is hanging from a tree. Her father is lying in a pool of his own blood, near to death.

Especially those closest to you

The police are convinced it is an attempted murder-suicide. But Sophia is sure that the woman who brought her up isn’t a killer. As her father is too ill to talk it is up to Sophia to clear her mother’s name. And to do this she needs to delve deep into her family’s past – a past full of dark secrets she never suspected were there . . .

What if your parents had been lying to you since the day you were born?

I got thoroughly immersed into “Everything Is Lies” almost immediately – excellent lead in to an emotionally charged story that was absolutely gripping.

Helen Callaghan has written a story about personality, manipulation and perception, wrapping it  up into a tense and genuinely intriguing family drama. Using the past and present to great effect (I, admittedly, found the past portions the more engaging of the two, the slowly unfolding truth about Sophia’s Mother brings her to stark, beautiful life) we find out that nothing about Sophia’s origins are as they seem. The characters in this drama are both enigmatic and beautifully drawn, the notebooks Nina left behind bringing an era to life – a time, not that far in our past, where certain things were viewed differently  – the central theme here is enduring and changeable but I won’t spoil anything.

Secrets abound, still I found the whole thing endearingly realistic – often quite heartbreaking – whilst the final reveal so to speak was nothing like surprising, this is not a book that lives and dies on being unpredictable but more an emotional journey of one daughter discovering her parents’ past and seeing them as people separate from herself. It is clever, yes very twisted with psychological thriller elements – but I came out of it feeling melancholy and this is one of those books where the characters are very real and you wish you could go back in and change the bad things into good.

Purchase Everything Is Lies 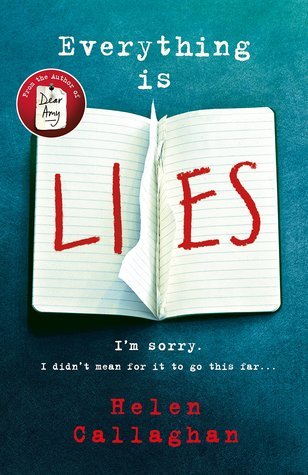