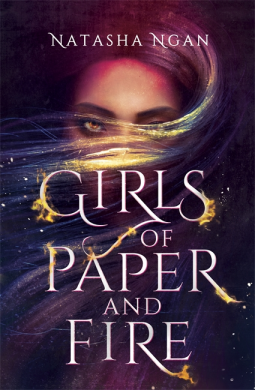 Each year, eight beautiful girls are chosen as Paper Girls to serve the king. It’s the highest honor they could hope for…and the most cruel.

But this year, there’s a ninth girl. And instead of paper, she’s made of fire.

In this lush fantasy, Lei is a member of the Paper caste, the lowest and most oppressed class in Ikhara. She lives in a remote village with her father, where the decade-old trauma of watching her mother snatched by royal guards still haunts her. Now, the guards are back, and this time it’s Lei they’re after–the girl whose golden eyes have piqued the king’s interest.

Over weeks of training in the opulent but stifling palace, Lei and eight other girls learn the skills and charm that befit being a king’s consort. But Lei isn’t content to watch her fate consume her. Instead, she does the unthinkable–she falls in love. Her forbidden romance becomes enmeshed with an explosive plot that threatens the very foundation of Ikhara, and Lei, still the wide-eyed country girl at heart, must decide just how far she’s willing to go for justice and revenge.

A totally immersive and often genuinely horror inspiring YA tale from Natasha Ngan here, with a  beautifully rich setting within which her characters shine.

It’s not that this type of story hasn’t been done many times across the YA genre but there is here a different kind of depth, an exploration of very relevant issues that is hugely thought provoking.

The girls called to the King’s service have no choice but to comply, all choices are removed from them, no quarter given. I loved the different layers of acceptance and reluctance, sometimes even an embracing of the fate handed to them that the author explores within the group dynamic. There are no punches pulled here, whilst the majority of the darker side takes place off screen so to speak it is the reaction and the emotion brought in the aftermath that makes it hit home. This is a gilded cage tale, one of dictatorship and rebellion and it is utterly compelling.

All taking place within a world of demons and humans, with a hugely diverse and intriguing  set of characters, a wonderfully descriptive political backdrop plus some heart breaking and heart stopping moments, Girls of Paper and Fire is a fascinatingly disturbing, intelligent and highly addictive read.

You can order Girls of Paper and Fire (Hodder and Stoughton) Here.