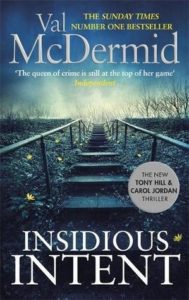 Source: Bought in a bookshop

In Insidious Intent, Tony and Carol are on the hunt for a serial killer who victimizes women at weddings without a date–and forces the duo to confront their most haunting moral dilemma so far.

In the north of England, single women are beginning to disappear from weddings. A pattern soon becomes clear: Someone is crashing the festivities and luring the women away–only to leave the victims’ bodies in their own burned-out cars in remote locations. Tony and Carol are called upon to investigate–but this may be the toughest case they’ve ever had to face. Meanwhile, Detective Sergeant Paula McIntyre and her partner Elinor must deal with a cruel cyber-blackmailer targeting their teenage ward, Torin.

It’s that time of year again when there’s a new Val McDermid book out in the world and last Thursday saw me actually rousing myself from my book cave and heading down to my local independent bookshop, where I waited impatiently for them to open so I could lay my hands on a copy. Which I did. Then I read it almost immediately because well, its Val McDermid.  Even more than that it features Carol Jordan and Tony Hill – two characters that are so real to me now that  I wouldn’t be at all surprised to turn on BBC News one day and actually see Carol Jordan giving an interview about her latest collar.

Before I talk Insidious Intent, I’m fairly sure there can’t be THAT many lovers of crime fiction out there that have not at least dipped into this series – but just in case I catch one of you reading this may I highly recommend that you read in order and take a few weeks off work. For me, absolutely one of the best series out there, even though we are now on book 10 each one offers something new, be it in the horrifying realities of the dark depths of human nature, a particular personal crisis for one of our beloved characters, a freshly observed moral dilemma or twist on a mystery that is inordinately difficult to predict.

So Insidious Intent then finds Carol, Tony and the rest with their first  case for the newly formed Remit – a major incident team headed by Carol and featuring her hand picked people. New characters and old friends form the unit, but they soon realise that having the spotlight on them, especially when faced with a difficult case and an intelligent killer, can bring its own pitfalls. Not everyone wants them to succeed – indeed in the aftermath of events from previous novels a fair few would like to see them fall flat on their asses – with Carol still facing down her demons and Tony struggling to continue to prop her up, the scene is set for a right page turner. And a right page turner it was.

Mixing things up with her indomitably twisted (in a creative way obviously) spirit, Val McDermid gives us less of a “whodunnit” and more of a “How the hell are they going to catch him” – we get snippets of the killer’s planning and motivation and from there see how our team are doing.We also have Paula and a parenting problem, my very favourite character outside of Carol and Tony (that would be Stacy Chen) doing lots of fascinating technical stuff and a sharp learning curve for the relationship between our main pair.

One thing I love about this series is the truly authentic sense that is brought to the procedural elements. It is never one thing that solves the case but more a myriad of things and often pure chance – in Insidious Intent it is going to take the talent of every single investigator to get them even within miles. So the story plays out, whilst at the heart of it a moral dilemma for our dynamic duo, in conjunction with a killer of a character (literally and figuratively), builds and builds to a crescendo of a resolution, one that had me genuinely with several paper cuts as I flung page after page over to find out if they would get him. Will they? Well you know what you have to do….

It is the personal touch that makes these books work so well – you feel like you are reading about real people, over the years Val McDermid has created a family. They are the readers family as much as they are hers and each others – therefore now, and for a few books before it at least, you feel every jolt, you devour every heart stopping moment, you live and die with what is happening now in the chapter you are reading. It is clever, involving, brilliantly emotional writing that also encompasses a lot of thought provoking real life issues  – in Insidious Intent yes, but also in every novel written, even those not featuring Carol and Tony – so you are entertained, challenged in your thinking and ultimately hugely satisfied if not a little wrung out. Definitely a little wrung out.

What? Well you know what you need to do… 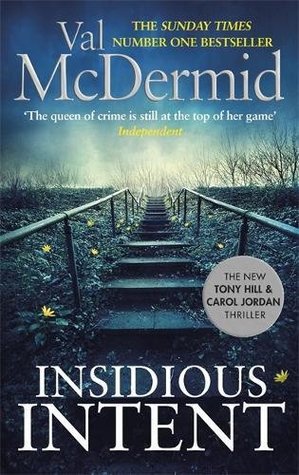