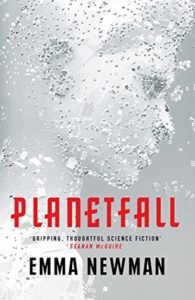 Renata Ghali believed in Lee Suh-Mi’s vision of a world far beyond Earth, calling to humanity. A planet promising to reveal the truth about our place in the cosmos, untainted by overpopulation, pollution, and war. Ren believed in that vision enough to give up everything to follow Suh-Mi into the unknown.

More than twenty-two years have passed since Ren and the rest of the faithful braved the starry abyss and established a colony at the base of an enigmatic alien structure where Suh-Mi has since resided, alone. All that time, Ren has worked hard as the colony’s 3-D printer engineer, creating the tools necessary for human survival in an alien environment, and harboring a devastating secret.

Ren continues to perpetuate the lie forming the foundation of the colony for the good of her fellow colonists, despite the personal cost. Then a stranger appears, far too young to have been part of the first planetfall, a man who bears a remarkable resemblance to Suh-Mi.

The truth Ren has concealed since planetfall can no longer be hidden. And its revelation might tear the colony apart…

Prior to reading “Planetfall” I’d heard it described as intelligent science fiction – having finished it I think that is probably the best way of putting it. Planetfall is at it’s very heart a character study examining the human condition – the fact that it is set on an alien planet just brings that home rather than setting it apart – in a beautifully emotional prose Emma Newman shows what happens when a community is both brought together and ripped apart.

Ren is a purely fascinating character – she pops from the page, the secret she is hiding slowly coming out into the light from her inner darkness – having lived a lie for a long long time, a stranger holds the key to unlocking her painfully hidden secrets. Around that we get the story of an epic quest to find “God” and an often dreamlike narrative that tells the tale of humans reaching out for answers into an unknown universe.

I loved it, immersed myself in it and cried like a  baby at the end – Planetfall has a dual sense of feeling to it – the very entertaining and clever imaginative side, plus the very very human side. Themes of religious fervour, mental illness, friendship and love all mixed up with ingenious world building and sense of place make Planetfall both a page turner and a thought provoking social study.

Beautifully written, masterfully plotted and with an ending to touch the soul, Planetfall comes highly recommended from me.