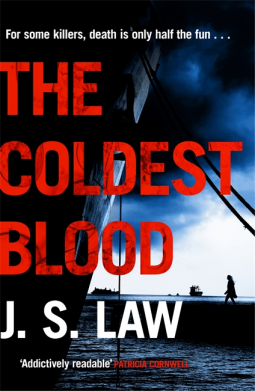 A savage murderer taunts the police from his cell.

Naval investigator Dani Lewis made her name by catching serial killer Christopher Hamilton, a master of manipulation who now lives to toy with the police. But when a stranger viciously attacks Dani, she fears Hamilton has one twisted game left to play.

As the case spirals out of control, Dani realises Hamilton’s deadly grip reaches deeper than she ever knew. With her sanity and family in peril, Dani has no choice but to confront pure evil – even if it drags up the darkest secrets of the past.

Well I’ve LOVED this series so far but The Coldest Blood is by far the best in my humble opinion- lots of things coming to a head, Dani in all sorts of trouble and a fast paced, barely let up plot that made me bang through it like a grasshopper on acid.

This author writes with such an absorbing prose that you are buried in the story from word one and from there both the heart and the action move on apace. The characters are beautifully engaging, I actually have a sneaky little liking for Chris Hamilton, serial killer, bane of Dani’s life. In this instalment that relationship is more twisted than ever and honestly it was entirely unpredictable and so well done.

J S Law has built such a beautiful mythology here, it is totally addictive, with an authentic feel to the Navy backdrop and a further fall into the threads from previous novels.

You’ll doubt your own mother by the time you are done with this. Fantastic.

You can purchase The Coldest Blood (Headline) Here.