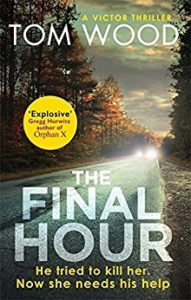 Agent Antonio Alvarez has been tracking a dangerous murderer for years, a nameless hitman responsible for numerous homicides.

The Agency deflected him away from his search, but he didn’t give up, piecing together clues and hearsay. Now a promotion has allowed him to pursue this man with a hand-picked team and bring him to justice.

Only problem is, the murderer has vanished.

Thousands of miles away, the assassin known as Victor has stopped working – recently he began to care; he made mistakes. Now he has a choice: whether to give up the life or return to being a cold-hearted weapon. But there’s another killer who needs his help – and she might be harder to refuse . . .

All while the good guys are closing in on him.

I am a Victor fan.

There’s this thing I have with this series where it is spot on perfect reading for me at certain times in my reading mood because I know I’m just going to really get into it and live with Victor for a while. Not that I’d *actually* like to live with Victor he’s a bit up and down on whether he’ll drink with you or break your neck but whatever. Nothing like a bit of danger.

Anyway, seriously speaking these are terrifically good thrillers in comparison to a lot that are out there at the moment because Tom Wood’s writing style is cleverly immersive – in the way that you don’t realise you are in it until you come out again. I like that as a reader and I like the lilt of the storytelling, simplistically elegant, I also like Victor as a main protagonist because he seems predictable but really is not.

In “The Final Hour” things get shaken up a bit. Raven returns (and I know not everyone warmed to Raven but I’m a little in love with her especially after the early morgue scene and then the ending) – the relationship between the two of them was one of the highlights of this instalment for me. Someone from the past is after Victor in a very focused way and by the finale I was all edge of the seat and stuff. Plus its left me rather more eager than usual for Victor 8 so that says it all really.

Bring on the next. 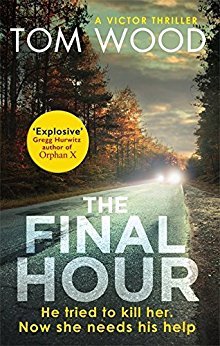 One Response to Latest Reads: The Final Hour Tom Wood.