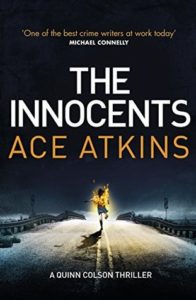 She was just 17, a high school dropout named Milly Jones, found walking down the middle of the highway, engulfed in flames. Even in a tough Mississippi county like Tibbehah, it shatters the community, and it is up to Sheriff Quinn Colson, back on the job after a year away, and his deputy Lillie Virgil, to investigate what happened, and why. Before long, however, accusations start to fly; national media and federal authorities descend; and what seemed like a senseless act of violence begins to appear like something even more disturbing – with more victims waiting in the shadows.

The Innocents, apparently, is Quinn Colson 6 – it is the first one I have read and has immediately sent me rushing towards the back catalogue -Quinn as a character immediately engaged me, this one set in Tibbehah, Mississippi it also had that small town southern noir feel that I have loved muchly in other novels.

Actually Quinn is not  Sheriff in this novel – that falls to Lillie Virgil, a strong female role offset with another strong female roll in “Miss Hathcock” playing the good v bad roles and everything in between – the ongoing verbal battles between these two being one of the highlights of the read for me. Quinn is a returning character, back from overseas, not looking to reinstate himself into the police until a tragedy occurs that sets the whole town reeling and plenty of accusations flying, so he finds himself lured back into the mire.

The setting is so beautifully described that you could almost feel like you lived there yourself. I didn’t feel discombobulated by the fact that I had not read previous novels – I just got pulled right into it and everything that needed explaining was explained through subtle nuances of conversation and remembrance.

The characters are diverse, eclectic, often very quirky and the community dynamic is divisive and entirely fascinating. The crime itself doesn’t happen until well into the story – by then you have a real feel for this place and these people, enough that you feel you can make some genuinely good guesses as to the final resolution. Cleverly plotted and ultimately somewhat unexpected, Ace Atkins digs deep into the prejudices, realities and often criminal existence of this populace with a wonderfully vivid and distinctive prose.

Yep I think I’m a fan. And hey look I have 5 other books to add to my never ending and ever growing to be read pile. I’d say that’s a good day.