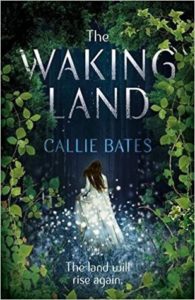 It’s been fourteen years, since King Antoine took Elanna hostage. Fourteen years since her father’s rebellion failed. Fourteen years spent being raised by the man who condemned her people to misery. A man she’s come to love as a father.

Now 20, Elanna is about to be taken prisoner once again… but this time by her father’s mysterious righthand man.

Her father wants to reignite his rebellion, this time using Elanna as figurehead. He will tell his followers she is the legendary Wildegarde reborn, a sorceress who could make the very earth tremble.

But what no one knows is that magic really does flow through Elanna’s veins. Now she must decide which side she’s on, and whether she’ll use her powers for mercy… or revenge.

The Waking Land really does have THE most beautiful cover and some beautiful writing inside it too, telling a fantastical tale of a land steeped in a magic that has fallen out of use. Elanna, kidnapped at a very young age, grows up belonging to them – before being taken back by her Father and beginning to learn that not everything she believes is necessarily true.

That is where we begin then and Callie Bates weaves an intriguing and enchanting tale of lands at war, morally blurred politics and ever changing family loyalties. Underneath it all lies a magical land, whose power slowly comes to the fore as Elanna discovers her true potential. But being ever conflicted, her struggle to see a clear path forms one of the most absorbing elements of this novel.

It is also a love story – and thank heavens in this case not an annoying one. Callie Bates has a wonderful attention to detail when fleshing out her characters, I loved that even minor ones ended up being entirely important to the plot, sometimes seemingly unimportant events take on a different meaning as things progress. I also adored the descriptive sense of it, ushering the reader into a world so different yet so similar to our own and making us feel the sense of it. The Waking Land is a novel to sink into, lose yourself for a while, away from the mundane routines of life.

Elegantly written and completely captivating, The Waking Land is one to watch this year in the Fantasy genre.