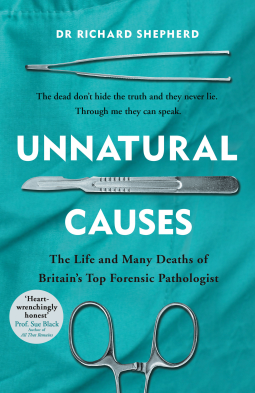 The dead do not hide the truth and they never lie. Through me the dead can speak …

As the country’s top forensic pathologist, Dr Richard Shepherd has spent a lifetime uncovering the secrets of the dead.

When death is sudden or unexplained, it falls to Shepherd to establish the cause. Each post-mortem is a detective story in its own right – and Shepherd has performed over 23,000 of them. Through his skill, dedication and insight, Dr Shepherd solves the puzzle to answer our most pressing question: how did this person die?

From serial killer to natural disaster, ‘perfect murder’ to freak accident, Shepherd takes nothing for granted in pursuit of truth. And while he’s been involved in some of the most high-profile cases of recent times, it’s often the less well known encounters that prove the most perplexing, intriguing and even bizarre. In or out of the public eye, his evidence has put killers behind bars, freed the innocent and turned open-and-shut cases on their heads.

But a life in death, bearing witness to some of humanity’s darkest corners, exacts a price and Shepherd doesn’t flinch from counting the cost to him and his family.

Unnatural Causes is an unputdownable record of an extraordinary life, a unique insight into a remarkable profession, and above all a powerful and reassuring testament to lives cut short.

Usually with non fiction I read in dribs and drabs around my other reads – not so with “Unnatural Causes” which I read from cover to cover whilst barely drawing breath.

A fascinating man and a fascinating life – Dr Richard Shepherd tells it how it is and his involvement in so many high profile cases makes this a hugely compelling look behind the scenes, beyond all those news stories and into the true realities. From Hungerford to 9/11 his very honest and genuinely compassionate way of describing events, challenges and difficult truths is endlessly, brilliantly evocative.

What struck me was his way of giving as much to the smaller, everyday tragedies as to the hugely well known ones. Every case he takes on gets the same descriptively emotional resonance and his obviously moral determination that the truth will out, however unpalatable that truth may be.

He is also very open about his own faults and rather than holding himself up as infallible, keeps the fact of his humanity and his own human errors – whether professional or personal – woven into the narrative as seamlessly as his successes. This makes for a genuine understanding of the world of Forensic pathology, a subject I now know more about than I ever thought I would, as well as of the man himself.

I thought it was brilliant. I’m sure that Unnatural Causes barely scratches the surface of a life and career ongoing.