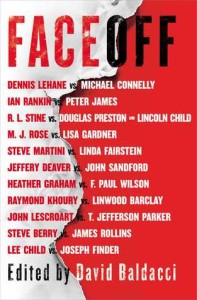 Thank you to all concerned for the review copy.

In an unprecedented collaboration, twenty-three of the world&#8217;s bestselling and critically acclaimed thriller writers have paired their series characterssuch as Harry Bosch, Jack Reacher, and Lincoln Rhyme in an eleven-story anthology curated by the International Thriller Writers (ITW).

I’ve had this book for a while, and I have been savouring it by reading one of the stories every now and then instead of in one big chunk – now I’ve finally completed the lot and boy was that a brilliant brilliant reading experience.

For a start some of my favourite characters are in here meeting some of my other favourite characters – I mean really, could it get any better? Then admittedly there are some characters in here whose books I have not read, which gave the whole thing a magnificent twist for me and oh boy has my”  to be read” list just exploded again. So the answer to my previous question is no, it could not have been any better.

I really don’t know where to start to be honest – there is so much to love here and so many different aspects to it that its hard for me to pin down any one thing to talk about. I can’t even pick a favourite story  – although it has to be said when Jack Reacher (Lee Child)  faced off against Nick Heller (Joseph Finder) my heart was jumping –  because they are all so magnificently done. Then you have F Paul Wilson’s Repairman Jack alongside Heather Graham’s Michael Quinn which was terrific and the battle of the legal eagles when Paul Madriani (Steve Martini)  met Alexandra Cooper (Linda Fairstein) and right there I would have been completely satisfied. But there’s more….

Harry Bosh is around, Rebus, Grace, Warren, Rhyme and Davenport (not necessarily together, hey lets not give everything away!) all mashed up  in an unprecedented and superb collection of short stories that has something for everyone. Each one well plotted, intelligent and intriguing, there was not a single story, even when it included unknown people, that I didnt adore.

Do you love your series characters? Have you ever wished that one could interact with another? Of COURSE you do and have, all us avid and addicted readers have a touch of that going on. If so then this one is for you without a doubt. Get yourself a copy and settle down to enter a familiar yet unfamiliar world – you won’t regret it. Like the best chocolate cake you ever had.