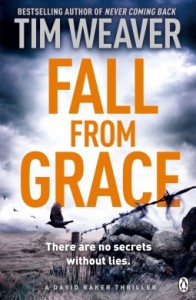 Thank you for the advance copy via netgalley.

When Leonard Franks and his wife Ellie leave the clamor of London for a dream retirement on the seclusion of Dartmoor, everything seems perfect. But then the dream shatters. Late on a January afternoon, only two years into their new life, Leonard leaves the house to fetch firewood – and never returns. Nine months later, he’s still missing.
With the police investigation dead in the water, Ellie and her family turn to David Raker. Raker tracks down missing people for a living. He knows how they think. But nothing can prepare him for what he’s about to find.

So here we are then, outing no 5 for David Raker and I have to say this is most definitely one of my favourite series. I’ve found every single one more addictive than the last (even though I read books 1 and 2 in the wrong order!) and I pretty much read this instalment in two sittings. It is definitely all Mr Weaver’s fault that I am bleary eyed and sleepy this morning…

This time David is caught up in the vortex of a complicated and far reaching case when he is asked to track down Leonard Franks – retired Police officer – who disappeared seemingly into thin air one day out on Dartmoor. What he finds is a web of deception going back years, one which may strike much closer to home than he would like. Add to that his attempts to solidify his relationship with newly found family and still coming to terms with the aftermath of previous events, you will barely be able to put this one down.

I’m enamoured of the atmosphere created in these novels – Dark, often claustrophobic, occasionally extremely creepy, David Raker carries the souls of the lost with him and that never fails to add an extra frisson to the reading experience. The character development over the course of the series has been superb and yet any one could be read as a standalone story – not an easy accomplishment.

Once again as well we have intelligent and realistic plotting, a terrific flow to the whole thing which immerses you right into David’s world and holds you there – with many genuinely surprising moments along the way. Incidentally, Mr Weaver gets an entry into my hall of fame for this one – only the 4th book to do so – because he completely got me with a bit of a twist and turn that I hadnt even considered. Doesnt happen to me very often so when it does I am delighted. And the ending….well anyone who reads this series and is a fan of a certain other recurring character, will be absolutely desperate to find out when Book 6 may arrive. Sigh. Chronic Impatience.

It is actually quite difficult when reviewing a series that you love and that is consistently wonderful to find new things to say, I’m fairly sure I repeat myself when talking about the David Raker books but heck, I don’t care. When they ARE all so extraordinarily well written and fabulous I see absolutely nothing wrong with saying so over and over again. Well Written. Fabulous. There you go!

If you havent started yet “Chasing the Dead” is where you need to go. If you have then I  can tell you that you are in for a real treat with this one. For all the reasons I’ve stated above and then some. Don’t miss it.