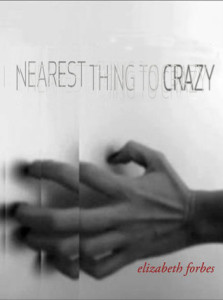 I recently read “Nearest Thing to Crazy” the debut novel from Elizabeth Forbes and it was superb. Elizabeth kindly agreed to answer a few questions for me about the novel and here is what she had to say….

Cass is quite a complex character – how well did you know her at the start of the writing process and how did she evolve?

I didn’t know Cass very well when I started to write her story. But I knew that she was vulnerable, and that she was very emotionally honest with herself. As such a large part of the narrative is focalized through her inner life, I wanted her to be both interesting and knowable – in terms of being a recognizable consciousness – to my readers. Being recognizable doesn’t necessarily make her likeable to everybody. And I know that a lot of people have found her vulnerability to be irritating. But, to me, that’s what makes her human. If she’d been a strong, feisty kind of character she wouldn’t have been open to the manipulation. And people can start off feisty and strong in their relationships, and yet get worn down and trapped. They can’t stand far enough outside of themselves to see their situations objectively. I suppose they get a bit eroded, like Cass. You either ‘get’ her or you don’t, as with people in real life.

I never really know my characters when I start to write, but as the process develops I find that they start to tell me who they are rather than the other way around. I get to see who they are by the way they react to the things I throw at them, and by the way their past has shaped them. Isn’t that the way we get to know people in real life too?

Funnily enough, I’m not sure. I understand Cass and the way she is because I created her and, in the same way, I think I understand Dan too. I think he reacted to the situation in a way which many men would understand – which doesn’t make him right, but I don’t think he’s unusual in his behaviour, given the circumstances. And equally Ellie has a backstory which makes some sense of who she is. I suppose if I was pushed I’d probably have to say Cass because I was in her head so much of the time. And I like her dry way of seeing some of the things going on around her. I love the fact that she’s far from perfect. I think I’d like her if I met her at a party because she’s warm, modest and open, and she can be quite funny. But I’d also have to say that being inside her head was often a very uncomfortable place to be!

I’m a terrific fan of twisty tales, is it difficult to write one realistically and still manage to surprise?

Oh yes! I know that lots of writers plan their novels meticulously and know exactly how their novels are going to end. I never do, which makes life difficult at times, particularly when I get within, say, three or four chapters from the end and I still don’t know what’s going to happen. But on the positive side, by not knowing the denouement, I think this helps in not subconsciously laying clues down as to the way the twists will work out. If I don’t know, then hopefully neither will the reader.

I love that you use the word ‘realistically’. Because I want to write stories that really do connect with real life, and that people can think: ‘this could happen to me…’ or ‘I know this person…’. I’m not the first person to call it the domestic gothic, but I think that’s what it is. The real fear of real things which can happen in the home – that aren’t based around crimes or brutal murders. Mental abuse, physical abuse… isolation and depression, things that might be happening right under our noses to people we are close to, but may have no idea what’s going on. To me that’s really frightening.

I’m working on it now and hope to have it ready for publication in June next year. Again it will be based around the domestic gothic, and will be an exploration of the relationship of a dysfunctional couple. At the moment they are SERIOUSLY dysfunctional, and not particularly sympathetic, so I am trying to understand what has made them who they are, and what attracted them to each other in the first place, so I hope the reader won’t be put off. I always find the unlikeable characters so much more interesting, and am bemused when people say they don’t enjoy books unless the characters are likeable. Some of the best characters in literature have been pretty nasty, but maybe the point is they have to be understandable and vulnerable too. It’s an interesting dilemma, I think.  I am moving away from first person narration although the story will be focalised through the two main characters; so I get to be a man which is a challenge, and I’m using the present tense which is also a bit of a challenge. I think it will be darker than Nearest Thing to Crazy.

Favourite “comfort” read – either book or author. (or both!)

First thing apart from loved ones and pets you would rescue from a burning building?

Computer – so then I’d have my photographs, my books and my music.

Favourite thing to do on a Lazy Sunday.

Tea and terriers and chats in bed. Sunday papers. The Archers omnibus – not necessarily because I know what’s going on, but because it’s soothing to have in the background. A visit from my grown up children. Chats in the kitchen with an excellent Bloody Mary made by my husband while roast and vegetables – preferably from the garden – crumble, etc are prepared. Maybe a few friends to join us, and a long, lingering, noisy lunch and then, when everyone’s gone, feet up on the sofa with three dogs squashing me and watching something great on the television – Homeland would be my ideal, but failing that Downton Abbey!

So this book had been on my wishlist,  it finally got put into my latest book budget batch – and before I start the review I have to say I chose to go for the print copy rather than the Kindle copy because its got a terrific eye catching cover. Looks great in real life! Kudos to the designer. Sometimes I think that it is becoming a lost art what with technology allowing instant gratification of ebook downloads these days so I’m always on the look out for good ones for my shelf! Anyway apologies to Ms Forbes as I digress….

Cass and her Husband Dan live a quiet life in the country…One day they gain a new neighbour, the glamorous Ellie, arriving to write her new novel in the peace of the rural setting. At first Cass is pleased to welcome Ellie into their midst but a series of events leads her to  start feeling disconnected from her life…and a little scared…but she can’t pinpoint exactly why….

Very much a character driven novel, mostly seen through the eyes of Cass herself, this is a beautiful and brilliantly written example of a psychological thriller, a terrific twisty tale and a completely captivating look at village life to boot. Cass is both amazingly complex and deceptively simple – the author has given her a true voice…and it almost casts a spell over you as you read. Never quite sure whether she is reading too much into things or whether something really is afoot, it will keep you deliciously off balance throughout the story….

A snapshot of village life, the setting is almost a character in itself. Village gossip abounds…the supporting cast can almost be imagined as being in the midst of a rather long running game of chinese whispers…but who is saying what and why? More to the point who is HEARING what and why…cleverly achieved. Despite the fact that the majority of the novel is seen through the eyes of a single character it doesnt read that way…it appears as if they are all talking. And therein lies the magic of the story and the charm of the reading experience for me.

Very enjoyable, a high standard of writing and  lovely prose make this a must read for fans of this type of tale and indeed fans of intriguing storytelling in any genre.